In year 2 of its partnership with MLB Advanced Media, NHL Network has bulked up its weekday live studio programming with the addition of NHL Now and the return of its dedicated ‘The Rink’ studio, which debuted for the Stanley Cup Playoffs in April. 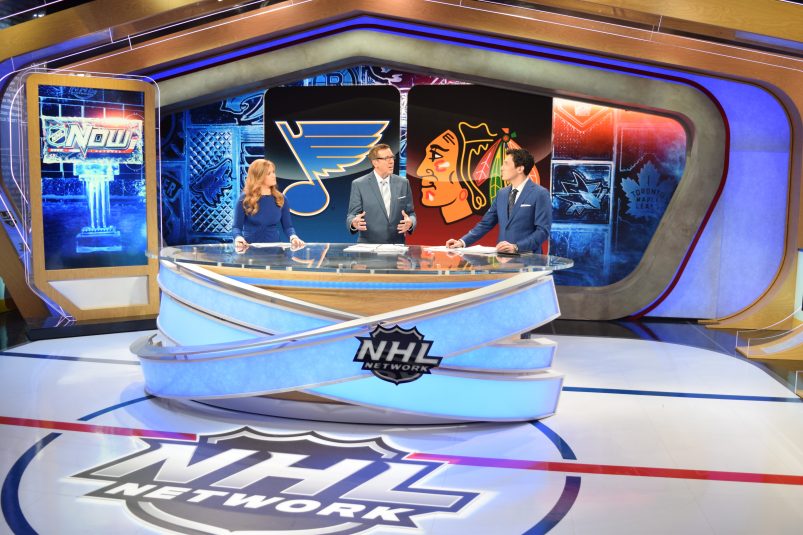 The launch of NHL Now, which airs daily at 4 p.m. ET, prior to NHL Tonight at 6 p.m., is part of a concerted effort to expand its original-programming offering, which has increased 25% since NHL Network relocated its operations from Toronto to MLB Network headquarters in Secaucus, NJ, before the 2015-16 season.

“The main initiative for us is to keep on increasing the amount of live programming and enhance the quality of it,” says NHL Network Senior Coordinating Producer Josh Bernstein. “That’s the direction we want to go. Live TV is key to what we do, so we want to keep pushing the envelope and the production value. You’re going to see new ideas, and we’ll be experimenting with different kinds of segments.”

NHL Now — co-hosted by E.J. Hradek, Steve Mears, and new NHL Network host Michelle McMahon — debuted on NHL opening night (Oct. 12) and originates from two studios in Secaucus, including The Rink. The show includes Arena Cam interviews from morning skates across the country, commentary from analysts and correspondents throughout the game, and interviews with players and team personnel.

“NHL Now is going to be a fast-paced, all-encompassing preview show that starts our programming day an hour earlier, which is a huge initiative for us,” says Bernstein. “We plan on touching on almost every game every night. The main difference [from NHL Tonight] is, it will have multiple locations and many different faces circling in and out throughout the two hours on satellite, on Skype, and in the studio. We will have less phone calls and more live video, which we’re excited about, as well as more visitors. Two hours is really going to fly by like a blink.”

To create a fresh, new opening animation for NHL Now, the network brought in an ice-sculpting team to create actual hockey-themed ice sculptures that figure prominently into the open and graphics package.

“[Our opening and animations] are very slick and very cool — both in temperature and in looks,” says Bernstein. “We want to make you feel like you’re in a hockey environment. You’re going see that theme in all of our graphics and in our animations. You’ll see the ice being shaved and the players being created out of ice. We also want [our opening] to be a wake-up call to get people excited for the show to start.”

The NHL Arena Cam system, which NHL Network has leveraged for several years, will play a major role in NHL Now, especially on the West Coast.

“[Arena Cam] is a big part of what we’re doing, and we plan on using [it] as much as possible,” says Bernstein. “One big advantage to our new NHL Now time slot at 4 p.m. ET is that the West Coast games will be wrapping up their morning skates when we’re coming on the air. So it’s an opportunity to interview players and coaches on game day from West Coast cities where we previously wouldn’t really have had access.”

The Rink serves as the home for NHL Network’s trio of live studio shows: NHL Now, NHL Tonight (starting an hour earlier this year), and On the Fly (postgame recap). The 1,200-sq.-ft. studio features a 12-ft.-high x 20-ft-wide “butterfly” LED display on the back wall and a Ross Video Furio robotic camera system with three Sony P-1 cameras (with Canon lenses). In front of the LED wall is a 10-ft.-wide studio desk with a 98-in. video monitor mounted inside a 7-ft. mock hockey goal to the right of the desk. 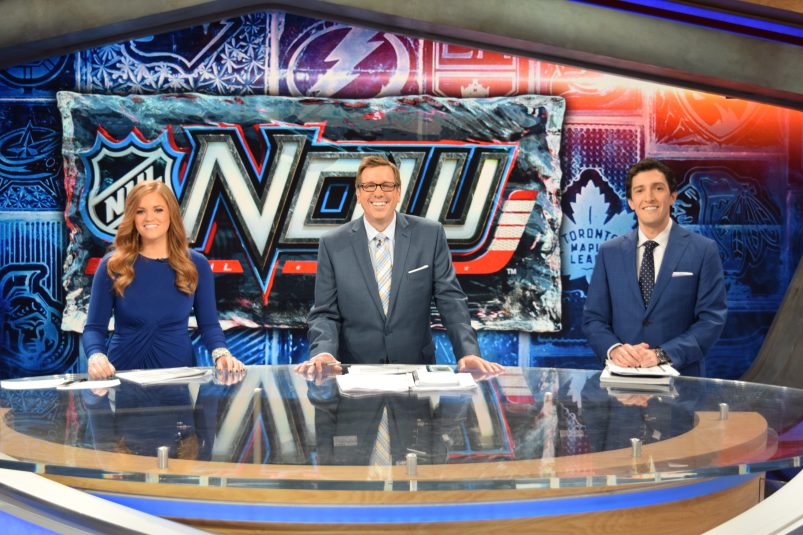 “Our own dedicated hockey studio was something that we had to have, and now we have it,” says Bernstein. “It’s got multiple locations, and the big butterfly monitor behind the desk is totally programmable, so we can produce it based on the content: when we’re talking about Carey Price, we can put Carey Price’s picture in there.”

“You’re going to see a lot more of the rink studio,” says Bernstein. “Now that NHL Now will be in The Rink, too, we are going to be in there quite a bit during the night and utilizing all of its nooks and crannies. It’s a multifaceted facility, and it’s really the key to what we’re doing this year, so we’re excited about it.”

Live Programming Goes Year-Round
NHL Network’s 2016 offseason was markedly different from the 2015 season. Last year, the NHL-MLBAM deal was finalized just two months before opening night of the regular season, making for a frenzied transition from Toronto to Secaucus. However, with its production team already entrenched in Secaucus, NHL Network was able to produce offseason live studio programming throughout the summer for the first time.

The programming included its most-ever live coverage of the first day of free agency and NHL Tonight every weekday, as well as a new slate of countdown series that ranked the best players throughout the league. In advance of the 2016 World Cup of Hockey, the network ran the first episode of its new NHL Network Originals documentary series, looking at the 20th anniversary of Team USA’s win over Team Canada in the 1996 tournament. Throughout the World Cup of Hockey, NHL Network produced live coverage surrounding each game on NHL Tonight. In between the World Cup of Hockey and the start of the season, NHL Network aired 18 preseason games in 14 days.

“Last season was a little bit of a shotgun start, and we definitely feel like we did a great job, but having an entire offseason to prepare this year was huge,” says Bernstein. “Having live programming year-round is a huge thing for us because we had the summer to generate ideas, develop more graphics and animation, have talent meetings, and things like that, which really enabled us to get in a better position going into the season.”