The new mobile unit, which launched on Sept. 20, is based in the Orlando/Tampa market

Mobile TV Group continues to evolve its fleet of side-by-side dual-feed mobile units with its latest pair of trucks, 40HDX and 40VMU. The trucks join six other pairs in MTVG’s fleet that use the two-trailer dual-feed model, which allows both the home and visitor shows to access all camera/replay sources while still providing a dedicated truck footprint for each show. 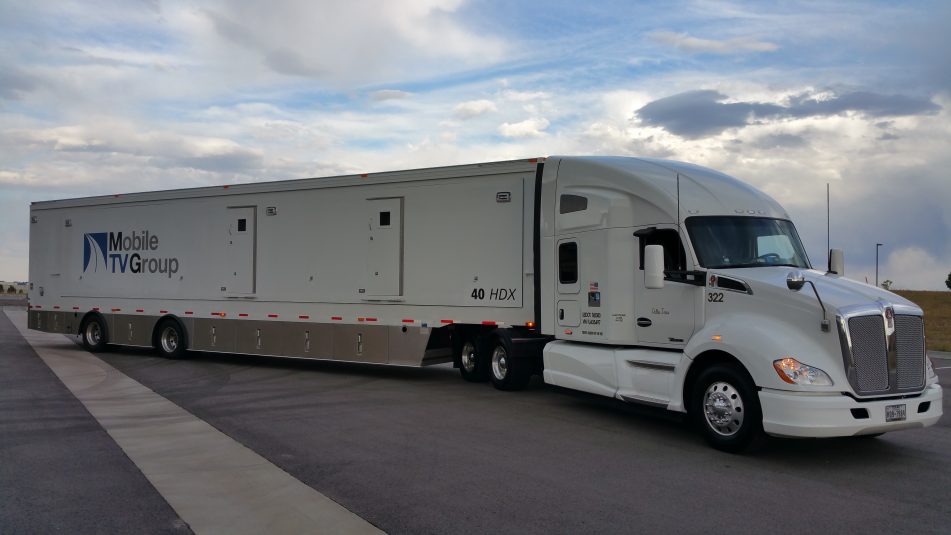 “The [two-trailer dual-feed model] has been a terrifically successful model for us,” says MTVG owner/GM Philip Garvin. “Clients, both the home show and the visitor show, love it because each gets its own truck but the rate is the same as [having] the dual feed in the single truck. Some producers have even said that it’s actually better than two completely separate trucks because the visitor gets all of the sources and features of the main home truck totally accessible in the visit truck, including the [super-slo-mo cameras].”

The new mobile unit, which launched on Sept. 20, will be based in the Orlando/Tampa market, primarily working Fox Sports Florida and Fox Sports Sun telecasts as well as additional shows throughout the Southeast U.S. When deployed in dual-feed mode for RSN shows, 40HDX’s Grass Valley 7M/E Kayenne K-Frame switcher is split: 4M/E for the home show, 3 M/E for the visitor show.

Bulking Up the Slo-Mo Complement

Although 40HDX/VMU (visitor mobile unit) is similar to the two-trailer dual-feed predecessors in MTVG’s fleet, the 40HDX A unit is a double expando and has a third bench in the production room. In addition, it boasts a larger complement of high-speed cameras, with a total of four Grass Valley LDX 86 Universe super-slo-mos. 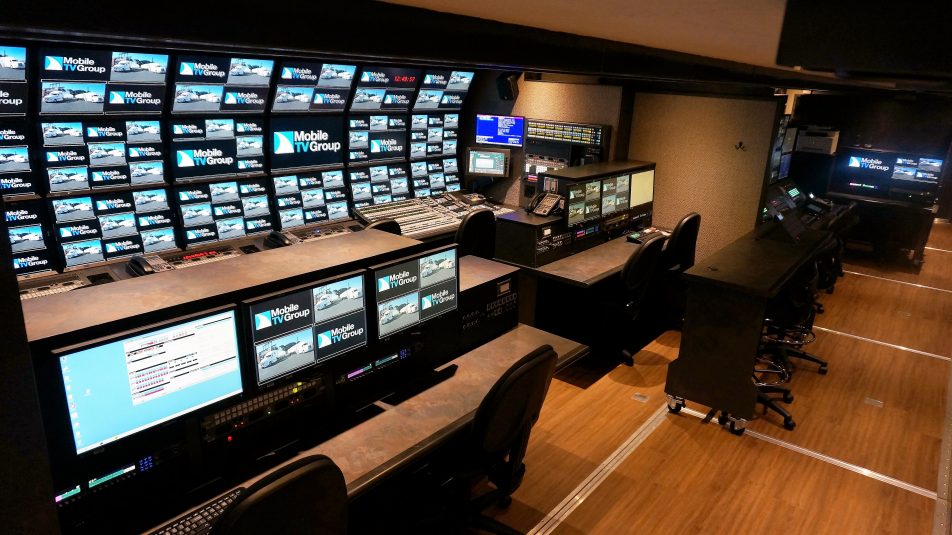 “I think most people would say that super-slo-mo replay is the biggest advance in sports production in the last five years in terms of the viewer experience,” says Garvin. “The problem has been, when there’s only one or two of them, there was always going to be situations where, if you missed a particular replay because [the cameras] weren’t positioned to cover that [play]. But, when you have four of them, there is a reasonable chance that every important play will be captured by at least one super-slo-mo camera.”

MTVG’s 38FLEX (a 4K-capable version of the two-truck, dual-feed model) also carries four Grass Valley LDX 86 Universe super-slo-mo cameras. The company has bulked up its stable of super-slo-mos so that 24 of the 27 53-ft. expandos in its fleet now have at least two of them, according to Garvin.

The 40HDX A unit’s control room features a four-stripe panel for the 4M/E of the Kayenne K-Frame switcher (96 inputs/48 outputs) assigned to the home show. The production wall features 16 32-in. LCD video monitors capable of displaying up to 132 images. 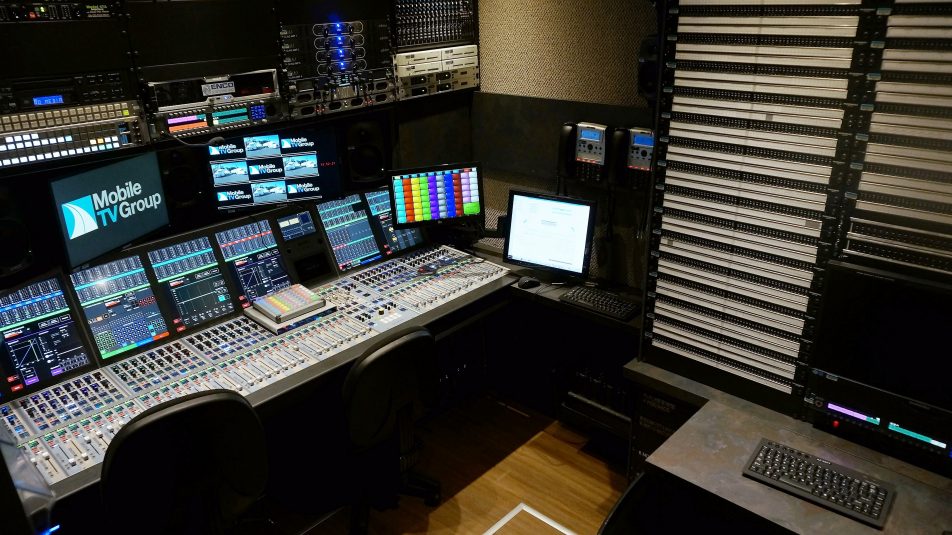 40HDX’s audio room is built around a Calrec Artemis Beam.

On the replay side, 40HDX/VMU features four 12-channel EVS XT3 replay servers (with 16-channel embedded audio) and a four-channel EVS XS3 server for SpotBox (two channels per show on duals). The truck can run in SSMO mode (16 HD in/12 HD out) or HD mode (32 HD in/16 HD out). In either configuration, two XT3’s can be split into two four-in/two-out operator positions.

“The EVS network is pretty sizable, with all XT3 12-channel servers, so the super-slo-mos and the regular HD cameras are all integrated into the network,” says Garvin. “It’s especially valuable to the visitor because now the visitor truly has instant access to all super-slo-mo replays.” 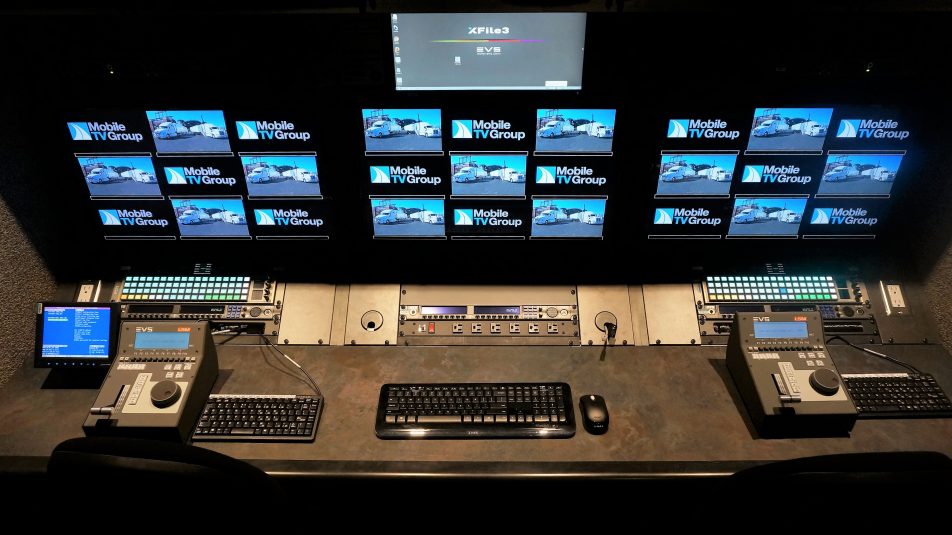 40VMU’s production room has a three-stripe switcher panel for the 3M/E assigned to visitor show and a seven-rack monitor wall with 58 displays. The visitor unit can have up to three EVS operator positions and two channels of EVS SpotBox with lance control (from the A unit). The audio room is built around a Studer Vista 1 (50 mono channels, 38 stereo channels) and deploys Sennheiser mics. The VMU is fully integrated with the A unit’s RTS intercom system.

Looking Ahead: HDX41 To Be ‘a New Kind of Truck’
41HDX is currently being integrated at MTVG’s Denver facility and will be what Garvin calls “a new kind of truck for us” when it rolls out in the first quarter of next year. Meanwhile, MTVG’s 39FLEX 4K-capable mobile unit, which launched in February, continues to work live 4K productions, including Notre Dame football for NBC Sports Group.

“The side-by-side dual-feed [model] has definitely come of age, but we continue with incremental innovation on every truck,” says MTVG Director of Business Development Nick Garvin. “And so, whether it’s adding more super-slo-mos, a third bench, or growing to a double-expand [trailer footprint], we’re squeezing more technology than ever into these trucks.”