The entrance of a Zamboni hardly goes unnoticed at any hockey game, but the level of ice-clearing spectacle is definitely major-league at the home of the ECHL’s Adirondack Thunder. This month, installation begins on what is likely the first 5-mm-pixel-pitch video display in the ECHL, and the Zamboni entrance will be crowned by a mega display that is second only in size to the new four-sided center-hung scoreboard setup. 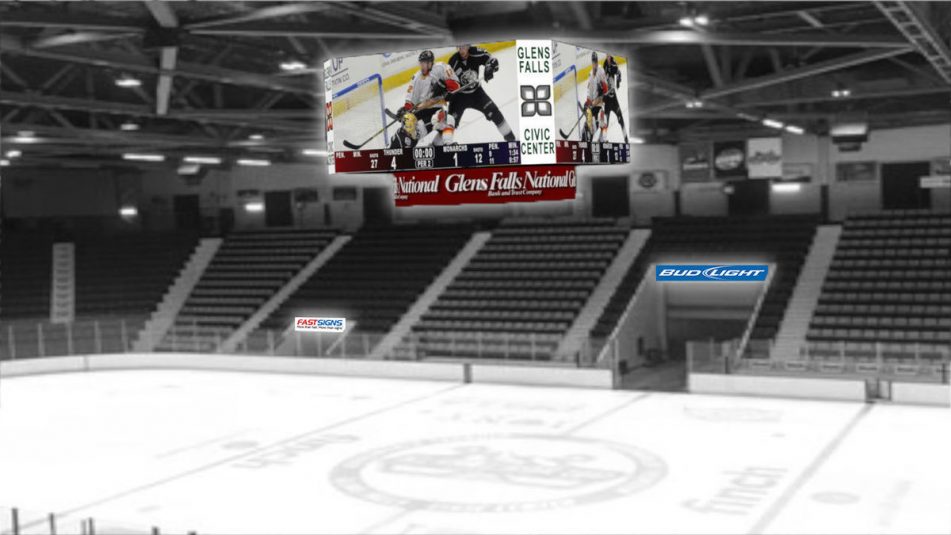 Glens Falls Civic Center, shown in a rendering, gets a 5-mm-pixel-pitch video display in a recent upgrade.

Why the hat-trick–level spectacle? Well, this particular roving ice-scraping machine enters at center ice in the Glens Falls Civic Center, giving it premium visibility. So, when Panasonic Enterprise Solutions worked with Adirondack Thunder management and the Glens Falls Civic Center to upgrade the facility, the Zamboni red-line entrance display was designated a first-string player along with with six new concourse-entry displays and the center-hung display.

The setup replaces a fixed-digit scoreboard and corner projection screens that previously served the 4,774-seat multipurpose arena in downtown Glens Falls, NY. Built in 1979, it was once the home of the Adirondack Red Wings, the former American Hockey League affiliate for the Detroit Red Wings. Now it’s entering the second year of a residency by the Adirondack Thunder, ECHL affiliate of the Calgary Flames.

The venue upgrades, along with a complete sound-system revamp and freshly painted rafters, are a result of a $2 million New York State grant for improvements to Glens Falls Civic Center. And the changes have already proved worthwhile: in addition to being the home of the Calgary Flames’ AA team, the venue has been designated the host of the 2017 CCM/ECHL All-Star Classic.

Installation of major-league fan-entertainment systems in smaller-scale venues benefits venue management, fans, and sponsors alike, explains David Frost, director, minor league sports, Panasonic USA, which is implementing the new technology at the arena. “When you get LED in the building, people’s perception of the building itself changes; people see the building in a very different light,” he notes, adding that the Glens Falls Civic Center is looking to attract more events, in addition to the concerts and WWE wrestling that have been a part of its roster for some time. Now the facility will host various state tournaments for high school sports, rodeos, and more.

“They’re making an investment,” Frost points out. “That needs to bring dividends.” And that begins with hockey, which maximizes the use of audio and video technology to serve demand for more moments of exclusivity, which can be served up easily by venue staff. Where once only the national anthem required venue-wide video domination, now, for a goal or a power play, the venue wants “hot buttons” that provide megawatt visuals with just one button push.

The ECHL in general is seeing an uptick in attendance and has established itself firmly in tandem with the AHL’s AAA hockey league as a “farm system” feeding the NHL with proven talent. According to the league, some 600 players have gone on to play in the NHL after the ECHL, including 30 who debuted last season. During the ECHL’s own 2015-16 season, the organization reported total attendance of 4.4 million fans, marking 4,000 average attendance for the 12th consecutive time.

The pressure to boost attendance numbers by offering entertainment on a big-league level is felt at many of the minor-league venues for which Panasonic provides complete fan-engagement systems, including WiFi upgrades, audio experiences, and, of course, mega video displays.

“The trends that people see in the NHL, NBA, MLB, and NFL are coming down to the minors, and they’re coming in a hurry,” says Frost. “The fans are getting more and more used to better clarity of sound and video, and Glens Falls is going to have the best out there.”