SVG is profiling this year’s 10 Sports Broadcasting Hall of Fame inductees in the weeks leading up to the ceremony on Dec. 13 at the New York Hilton. For more information, visit sportsbroadcastinghalloffame.org.

In American professional sports, there are owners, and then there are icons who influence the growth and prosperity of their sport well beyond their own franchise. Dan Rooney is one of the most distinguished owners in the history of team sports. 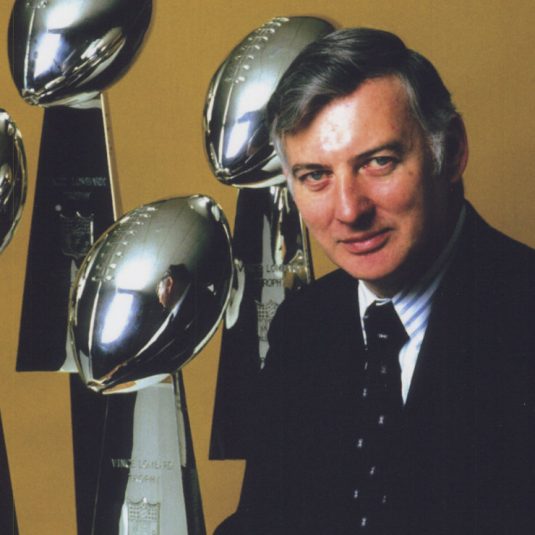 His Pittsburgh Steelers grew up with the National Football League and were a key cog in the growth of the league into today’s sports-television behemoth. He did that not just through winning — which the Steelers did plenty of, especially during its years of dominance in the 1970s — but through forging strong relationships with all the league’s franchises.

Dan Rooney has been nothing but Steelers black and gold since he was born — in Pittsburgh in the summer of 1932, mere months before his father, Art Rooney, paid a $2,500 franchise fee to found an NFL club in in the city.

While the franchise struggled to compete in the 1940s, ’50s, and ’60s (the team made the playoffs only once during a 37-year span), Dan spent his formative years working in nearly every aspect of the franchise. By 1969, he was running the franchise’s day-to-day operations and personally made one of the most pivotal coaching hires in NFL history when he signed Chuck Noll. The results since Dan Rooney took over the Steelers are indisputable: 15 division championships, eight AFC championships, and an NFL-record six Super Bowl titles.

“When you think about the Pittsburgh Steelers, the words that come to mind are integrity, class, loyalty, performance, and longevity,” says Sean McManus, chairman of CBS Sports and fellow Sports Broadcasting Hall of Fame Class of 2016 inductee. “Those are the qualities that are the hallmark of the Steelers, and they are values that Dan Rooney embodies. When you list the greatest owners in the history of the NFL, Dan Rooney is at the very top of that list.”

Rooney’s influence on the league goes well beyond the Steelers’ success on the playing field. He was a driving force for change and leadership as a member of the board of directors for NFL Films, the NFL Scheduling Committee, and even the NFL Trust Fund. He was chairman of the league’s Expansion Committee that brought franchises to Seattle and Tampa Bay in 1976 and was chairman of the Negotiating Committee in 1976 before helping define the salary cap and the collective-bargaining agreement during negotiations with the Players Association in 1982. Many attribute his commitment to balance of power in the league as key to the league’s being such a captivating television product today.

“[His] insight and influence on all the different committees [he has] been a part of were so impactful to the league,” says CBS Sports on-air analyst Bill Cowher, who was Steelers head coach under Rooney for 15 seasons (1992-2006). “The NFL has enjoyed tremendous growth and has gone through so much change, and [he has] been an integral part of that.”

Rooney’s most lasting legacy is likely to be his advocacy for racial equality across the NFL, which led to formation of the famous “Rooney Rule,” a league-wide policy that requires teams to interview minority candidates for head-coaching and senior football-operations jobs.

Rooney was elected into the Pro Football Hall of Fame in 2000 and, in 2003, began a transition to his son as his father had done. Art Rooney II now runs the day-to-day operations, with Dan serving as chairman and, to many fans, the public face of the franchise.