With Ovation, Proshow Continues on Path to ‘At-Home’ Production

As the at-home production model becomes increasingly significant in the live sports production, Proshow Broadcast has found itself in the middle of the action. Having launched in 2008 with a single SD truck, Proshow has embraced the growing REMI (remote-integration) production market by rolling out a fleet of six at-home–friendly mobile units ranging from a pair 40-ft. Gerling Stallion trailers to a trio of 24-ft. Mercedes Sprinter vans working for Pac-12 Networks. Proshow’s latest mobile unit, a 27-footer dubbed Ovation, will debut just after New Year’s and is based on the successful 27-ft. Opus unit that the company launched last year. 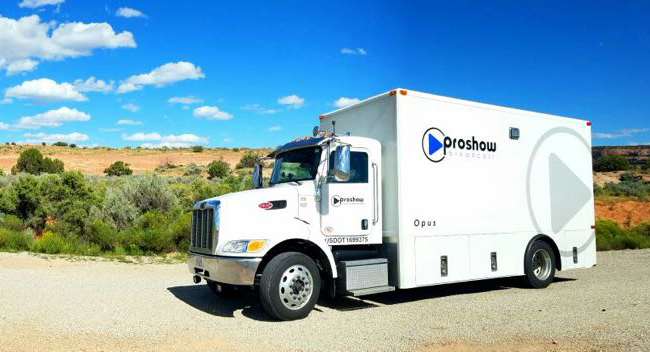 Ovation is based on its predecessor truck, Opus (shown here).

“Last year, we realized we had outgrown the Sprinter-van [model] on which we built the first three trucks for Pac-12 Network for their at-home [productions],” says Proshow President/founder Tim Lewis. “Clients were doing bigger shows that required more space, more cameras, more cargo, more cable, more everything. So we built Opus, which was the first of the new [27-ft.] design targeted at the at-home market but also capable of other [small traditional remote] productions.”

Opus stayed busy throughout 2016 and received positive reviews from clients, leading the company to launch a nearly identical truck for 2017.

“We were really pleased how [Opus] worked out and hit the mark on what was needed,” says Lewis. “It stayed very busy on college basketball and throughout the year. One of our major sports-broadcaster clients said it was the perfect REMI truck and absolutely loved it. That client has been encouraging us to continue to build along that model, as have other clients who have been really pleased with it. So we decided to move forward with Ovation.”

When launched in January, Ovation will be housed in a 27-ft. Gerling Super Nomad on a Peterbilt chassis and will feature a Blackmagic Design ATEM switcher and 72×72 video router. The truck will roll with six to eight Sony cameras with Canon lenses and will be wired for a six-channel replay system.

“We’re not changing much because we feel like we hit it right on the head with Opus, so Ovation will be pretty identical to Opus other than a few small things.”

One element that will be different is audio and comms, which will rely more heavily on Dante IP-based audio. Proshow began experimenting with Dante on Opus (with an analog backup) but will expand its use in Ovation, which will feature a Yamaha QL-5 (72 channels, 32 faders) and RTS ADAM-M matrix intercom system.

“REMI trucks need to be very capable in audio and comms; video’s pretty easy because you just pass back however many camera paths back and you’re done,” says Lewis. “A lot of digital Dante integration is so we can do full-fiber audio, drops, and booth kits where we need to. It was a really good platform for that, so Ovation is building on that and even updating technology a little more.”

“Our booth kit is basically extending an Ethernet network out to the booth over a couple of pairs of fiber, and there will be a multiport Ethernet switch dropped in the booth. There will be literally no XLR cable in the booth. Everything else is Cat 5 [cable], and it’s all flowing over Dante down to the truck. That’s really going to make things slick.”

Lewis adds that Opus and Proshow’s trio of Sprinter vans (Busker, Solo, and Trouper) are likely to be retrofitted with Dante-based infrastructure as the technology becomes more reliable.

“We’ve been leaving ourselves some safety net since you can never trust anything 100% in the first year; we had analog backup,” he explains. “You go into an older venue that has no fiber and only has DT12, and it doesn’t make a whole lot of sense to run 2,000 ft. of fiber just to do a fiber booth kit, so we have to leave ourselves some flexibility. But we’re really looking at targeting copper [reduction] on our trucks to save on the weight limit. Fiber can go a long way in helping that out.”

Vancouver, BC-based Proshow opted to build its seventh truck not only to keep up with the rising demand for at-home production but also to extend its geographic reach across the U.S.

“We’ve seen a lot of growth on the East Coast over the past year and felt that we needed to better support that region of the country,” says Lewis. “Opus is based in Dallas for basketball season and primarily covering [the South]. With two units in Ovation and Opus, we will never be more than a couple of days’ drive from where we need to get anywhere in the country.”