The 2016 season has been a pivotal one for the National Hot Rod Association (NHRA). The organization not only enlisted a new TV network partner, Fox Sports, but also built an in-house TV-production team from scratch, increased its social-media and online-streaming presence, and, most important, saw its total TV viewers grow from 14 million last year to 34 million this year, not counting the championship weekend, which took place this past weekend in Pomona, CA. 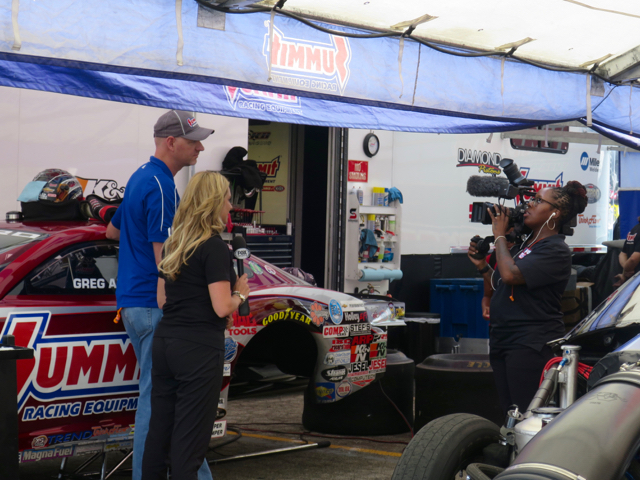 NHRA race coverage is complemented by plenty of interviews from the pit area.

“[Building the production team] was a huge expense and a big investment,” says Terry Blount, VP of public relations and communications, NHRA. “We felt the most important thing we had to do this season was fix television. If we fixed television, then it would filter down to all the other things. But it was something we felt we had to do.”

The return on that investment doesn’t lie; all season long, NHRA has found new success: Sunday Finals TV ratings are up 25% from 2015, and the important 18-49 demographic is up 52% from a year ago.

“That is the most important thing to me,” says Blount. “We are growing younger while motorsports in general is skewing older.”

And social-media numbers are also up, with Twitter followers doubling in less than nine months.

One of the first moves the NHRA did as part of its renewed commitment to improving the TV product was to hire Ken Adelson as VP, executive producer, and chief content officer. For nearly two decades, he had called the NBA home and, from 2008 until 2011, had built from scratch the broadcasting and digital-media departments for the NBA’s Oklahoma City Thunder. So he knows what it takes to get a new department off the ground.

“It’s been an incredible commitment by the NHRA to take the bull by the horns, have control of our own multimedia operation, and get out the messages we thought had not been getting out in the past,” he says. “And the new contract with Fox was great, as it increased the number of hours from 125 a year to more than 500, including live shows on Friday night that just happened organically during the season.”

Part of that commitment involved also adding a state-of-the-art television studio in the Wally Park Broadcast Center at the NHRA office in Glendora, CA, where features, news reports, and live interviews each week are produced and streamed online.

The core, however, is the race coverage as well as coverage of all the happenings around the track. The unique atmosphere of an NHRA race allows fans to walk around the pit area, visit with race teams and drivers, and much more. It is, for all intents and purposes, a nitro-fueled county fair.

Adelson brought in Mike Rokosa, also formerly of the NBA, to serve as NHRA technology executive. The two, along with a team of more than 60, are making sure the quality of the productions continues to improve this year in advance of a big move to Game Creek Video’s Nitro, which will house the production team beginning in January. The team is currently working out of an F&F Production trailer (previously, a Crosscreek truck), with a Screenworks truck for the in-venue show.

“The biggest thing is that the [Nitro] B unit will be a full extension of the A unit, with a Grass Valley production switcher and Calrec audio console for submix needs [and integration] with the Calrec Artemis in the A unit,” says Rokosa, noting, “The in-venue show will have all of the resources the main show has on the EVS network, so that will enrich that show as well.” 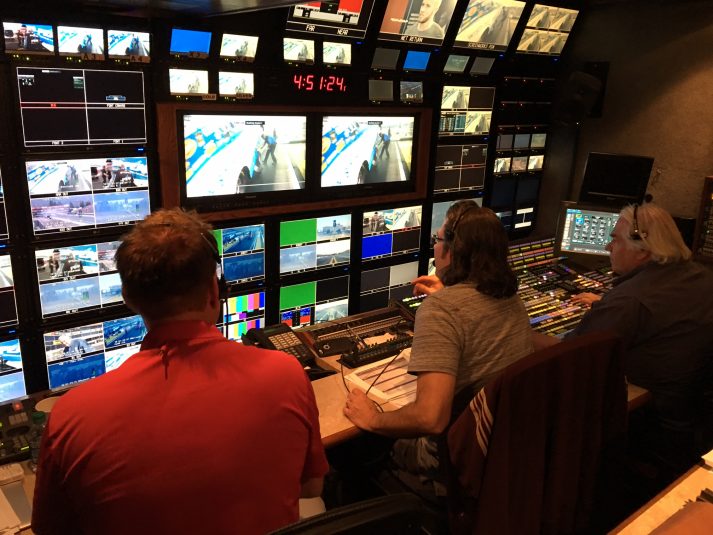 The front bench in the F&F truck the NHRA production team called home, cranking out more than 550 hours of coverage for Fox Sports, up from 125 hours last year

The normal race production comprises four hard cameras down the line: one covering the start, a second at the 1,000-ft. finish line, a third at the quarter-mile finish line, and a fourth at the end of the track near the sand pit. There are also two handheld cameras at the starting line and three POV cameras and an additional five POV cameras along the track walls.

One of the big changes he has brought to the production is the use of virtual graphics from Sportvision, complementing a new Vizrt graphics package built by the team at Fox Sports.

“One of the things I noticed was that there is no finish line, as the heat from the tires is too much for a painted line. So we have a virtual finish line,” says Adelson. “We also have virtual player cards that pop up behind the cars and show the picture of the driver and the sponsor. [We] also have sponsored lanes.”

This past weekend also saw some new technology deployments. The Sony HDC-P43 box camera made its broadcast-TV debut (capturing HDR images that are expected to be seen at CES and other industry trade shows) at the start line.

“Sony is going to be one of our technology providers for the new mobile unit, and they tested some of their newest, latest, and greatest equipment this weekend,” says Adelson. “Next year, the Sony HDC-4800 high-speed camera is going to become the standard for our coverage.” 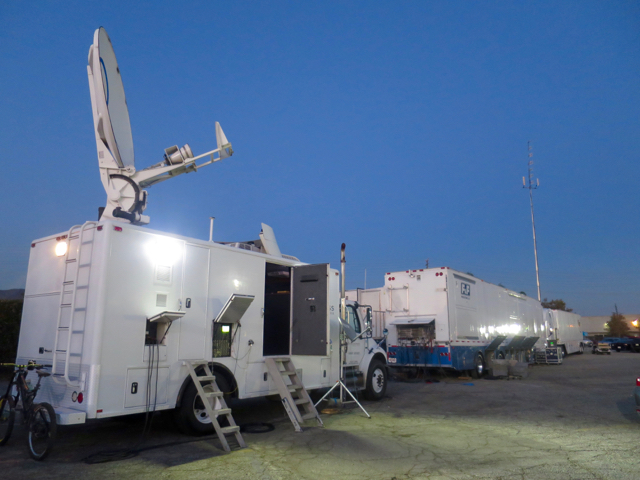 The NHRA truck compound features an F&F truck, a BSI truck, an Encompass Digital satellite uplink, and a Screenworks truck.

Also on hand was a new RCP system from Inertia Unlimited, used to paint the Marshall POV cameras located around the track. That unit is being sold by Marshall but is wholly designed and manufactured by Inertia.

Another big step forward next year will be the move to surround-sound audio rather than stereo audio.

“Sound is what a lot of the experience is, and you don’t feel it at home because it is a full-body experience,” Adelson explains. “So we want to do as good a job as we can with technology to make that happen.”

All the efforts this year are paying off for both the NHRA and Fox Sports. According to Frank Wilson, VP, event and studio production, Fox Sports, the commitment gives FS1 the chance to fill its programming hours with viable content that also has a good demographic.

“When we had a NASCAR race in Martinsville[, VA,] that handed 3 million viewers to NHRA, the NHRA was able to hold onto a million of them for a three-hour period,” he says. “That is significant.”

This year saw four NHRA shows with more than 1 million viewers, including 1.3 million for a show from Atlanta, says Blount. “The more people see us, the more they like us and the more they will watch throughout the year.”