Raymond James Stadium was selfie-ready long before selfies were a thing. As much a hashtag-friendly backdrop as booming game-day entertainment vessel, the venue’s iconic 103-ft.-long replica of an 1800s pirate ship has been a part of the game-day experience since the Tampa Bay Buccaneers defeated the Chicago Bears on Opening Day in 1998. The ship’s cannons may blow a lot of smoke, but the $3 million spectacle and surrounding theatrically weathered village backdrop of Buccaneer Cove, built by major theme-park builder Nassal Co., are certainly pioneering elements of the image-centric modern game-day experience.

With the bar set high from the start, it’s no wonder that Raymond James Stadium had to go epic with the spectacle-enhancement aspect of its $140-plus million multi-phase renovation project. Phase 1, completed in time for the Buccaneers’ 2016 season, saw the installation of 14 displays totaling more than 39,000 sq. ft. of video display, comprising two massive 9,600-sq.-ft. Daktronics LED boards on the ends and four 2,300-sq.-ft. HD tower walls. 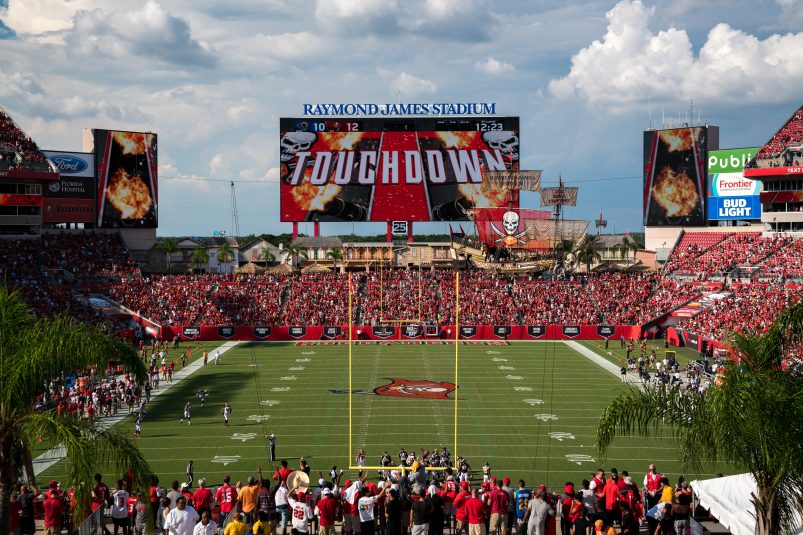 The new video displays are so big that the existing south–end-zone loudspeaker cluster had to go, which meant the stadium followed the sound-enhancing trend of upgrading to a distributed audio system. Designed by WJHW and installed by AVI-SPL, the setup is composed mainly of JBL PD700 and PD6000 series loudspeakers, with pole-mounted Meyer Sound CAL 96 steerable column arrays filling in areas along the upper deck where the rigging points on lighting trusses would have been spaced too far apart for good coverage.

Now with 23 million LEDs and more than 400 loudspeakers to play with, Raymond James Stadium is steering the pirate ship in a new direction, toward enhanced integration of sound and video. The audio-system retrofit provides not only the essential benefits of a distributed system — providing more near-field sound to most seats, thereby syncing audio more precisely with video when people are speaking on screen — it is also wired in a left-right stereo configuration to provide a pseudo-stereo image in the bowl. That setup, combined with Waves processing added to the DSP server, provides some next-level dynamic filtering. On top of that, the system is also capable of delivering eight channels of surround effects, which means in-house production now has a lot more tools for adding some audio effects along with some video content in the future.

“People are starting to think about what else these systems can do beyond third down and goal from the three,” observes Mark Graham, associate principal at WJHW. Going beyond the game call to include music cues at key moments or when the teams are in a huddle is still a comparatively new production component in football, and even crowd-energizing tunes tend to roll separate from the video content. “To think now they might start syncing multichannel sound with video capabilities that we have in these stadiums is pretty cool.”

The Buccaneers crew will be using the offseason to develop ideas that take advantage of the new audio system’s capabilities. The surround-sound element holds some unique potential, Graham says, if teams develop features to be used just once or twice during a game: “If an effect happened after every play, it would likely get old.”

Teams have been looking at using stadium-wide surround effects for years, but “developing the content requires creativity in the content production and then literally sitting very tediously in the bowl with your audio software, testing and tweaking and tuning how it reacts in the stadium, and adjusting levels accordingly,” Graham points out. Few teams have implemented it to great effect, other than the Tennessee Titans in past seasons and the Denver Broncos’ new stampede effect unveiled this year.

Wrapping sound around the stadium would be the next logical step for venues embracing screen-domination features and moments of exclusivity for sponsor partners. The Buccaneers are way ahead there, having worked with Daktronics Creative Services to produce more than 100 pieces of custom video content, several of which were designed to be shown as one continuous visual across multiple displays within the stadium.

The stadium as massive, unified video display is one of the newest ways venues are upping the ante on takeover moments, observes Daktronics Creative Director Bob Lee. And an accompaniment of all-encompassing audio, he adds, might not be far behind.

“Everybody is looking for the next great way to help partners get their message exposed,” he says, “whether it’s parts of the features or game-day show or social media. But what’s been very impressive are the takeover moments, at times in the game when fans are not necessarily staring at displays, to draw their attention by accompanying the video with sound. That really gives it a pop and gets a reaction from fans.”

Daktronics worked closely with the in-house team to make sure the stadium’s wide array of canvases were effectively tied together to represent all the big moments, as well as the smaller stories that color the game-day experience. Making the most effective use of Raymond James Stadium’s many new displays was a process facilitated by Daktronics’ long-standing relationship with the Buccaneers, which dates to when the stadium opened and even beforehand, when Daktronics Creative Services Account Manager Fred Doremus was involved in the installation of the Bucs’ first CRT display.

Having been there from the start, Doremus says this latest iteration of super video at Raymond James Stadium has been generating buzz from the moment the new displays went live. It’s definitely a noticeable improvement. Even from outside the stadium, he says, it’s easy “to see the whole sky light up because of the number of pixels coming out of the stadium now.”

Development and tweaks of the video content continued throughout the Buccaneers season. Raymond James personnel observed crowd response to pieces and tested out the big new capabilities of its stadium-wide canvas.

“They’re learning as they go, as a lot of teams are,” says Doremus. “Everybody is trying to figure out how much is enough or how much is too much. What’s too overwhelming for the fans, too much to try to absorb? Are they better off focusing in on a couple displays vs. many. We’ve been hearing from more people trying to figure that out. A lot of teams are dealing with more of an inventory than anybody’s ever had before, and, rather than just displaying someone’s logo a million times, the goal is to create this ‘wow’ moment of exclusivity for a sponsor or the team. That’s what everybody seems really focused on.”