One of the big trends in recent years has been the transition from Super Bowl Sunday to Super Bowl Week, and this year’s big event marked the first time that the Fox sports and news networks have come together to create a full slate of programming originating from the Super Bowl site. That effort produced a massive presence at Discovery Green Park, with two 40- x 40-ft. studios, a small football field, an activation area where fans can experience a fun 24: Legacy promo, and much more. 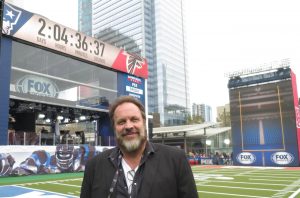 Rod Conti says the Houston Super Bowl committee did a great job meeting the needs of the Fox Sports team.

“The growth of our footprint here was because of the growth of the network, with more shows that wanted to be onsite,” says Rod Conti, VP, technical operations and production management, Fox Sports. The result? Two separate 40- x 40-ft. sets built by Filmwerks give the production teams the breathing room to transition from one show to the next. One of the sets is located at ground level; the other is in a two-story structure with the second story serving an aesthetic function rather than practical, making the set the centerpiece of the NFL Experience area in the park.

Filmwerks played a key role in building out the sets in Discovery Green as well as the sets in and around NRG Stadium. 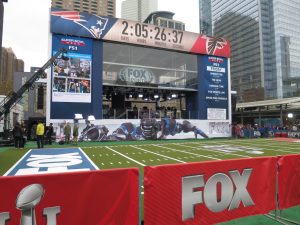 Videoboards from VER give the Fox Sports sets some extra visual punch.

“We were trying to see if we could create something here that could be broken down and then moved to Russia for the men’s World Cup in 2018 and to Paris for the women’s World Cup in 2019,” says Conti. “’But, with all the unknowns, we decided it was best to keep it local and build it with our friends at Filmwerks, who really are the best in the business when it comes to glass-enclosed sets. The weather here can be unstable, so we wanted glassed-in studios to protect us.”

The planning efforts began well before the start of the 2016 season, and the season opener gave Fox a chance to kick the tires as it hosted activities from Discovery Green to bookend the season.

The alternate set, which is located at ground level, has been home to shows like Undisputed, Garbage Time, Speak for Yourself, and the pre/postgame coverage of the UFC fight tonight. It holds about 100 people and gives the shows a chance to have a studio audience involved when needed. 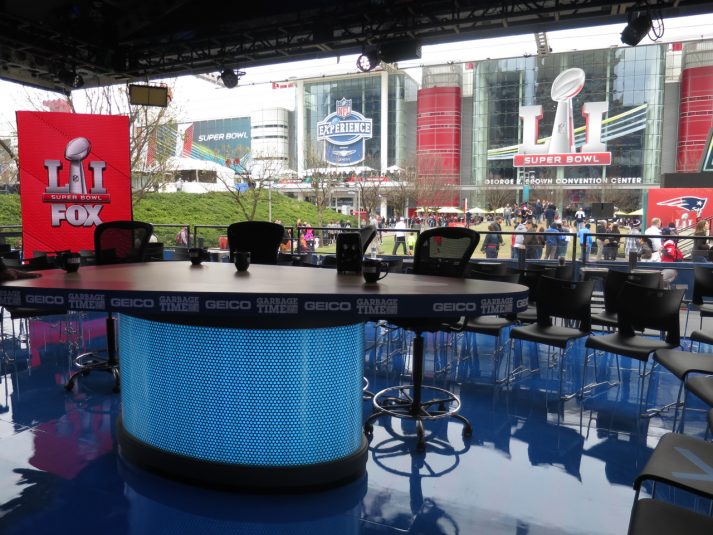 Inside the Fox Sports alternate set at Discovery Green Park

The larger set is home to shows like The Herd, Fox Sports Live, and Race Hub. And, on Sunday, it will be the kickoff location for pregame coverage before the team transitions to the pregame set at the stadium later in the afternoon. The camera signals from the set at Discovery Green will be sent via fiber to the Game Creek Video Cleatus A and B units at NRG Stadium, where the production team will be located all day.

“One interesting technical part is that every camera and source can be used by both control rooms in the NEP ND1 unit,” says Conti. “At first, we thought having ND1 here was like killing a mosquito with a bazooka, but we are using just about all the resources in the truck, and it gives us the flexibility to respond to things.”

The shows are being cut in the ND1 unit and delivered to Pico, Fox’s Los Angeles facility, for graphics insertion. The UFC pre/postmatch coverage, however, will have the truck operating in full production mode. 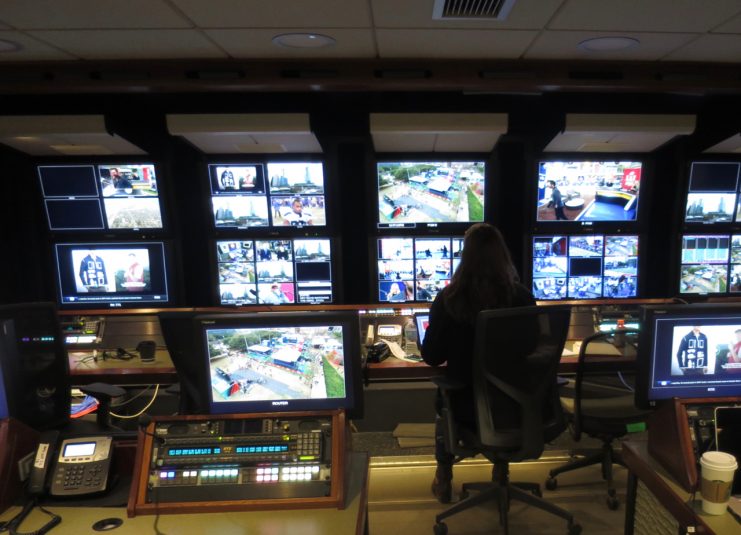 NEP’s ND1 has been separated into an A and B control room to handle the two Fox sets at Discovery Green Park.

“The interactivity of these shows needs the director here: anything can happen, and being able to respond to that is more valuable than having people at home,” says Conti. “We don’t do any tape or graphics here, but we do have Vizrt to help with content in the screens that create a different environment for each show.”

Discovery Green Park is a large area, and, with all the activities going on, there is plenty of interesting eye candy to deliver to viewers at home. Helping in those efforts is an 83-ft. Strata crane that can soar above the crowds and sets.

“We looked at drones and point-to-point systems, but we get just as much out of this, and it can house a strong camera,” says Conti. “Placement is key, but we are lucky to have it so we can bring the big atmosphere here to viewers.”

Also on hand is a TechnoCrane with a Stype camera tracking kit so that virtual graphics can be incorporated. Conti points out, “It can go down to 7 ft. and almost crest the roof within seconds, with the virtual graphics laid out.”