CAT Entertainment Services is on hand at Super Bowl LI with 16 technicians and is providing 8,600 kW of generator power, 1,300 kVA of UPS-supported power, and more than 7 miles of cable as the company looks to ensure that loss of power is not a concern for the Fox Sports production family. 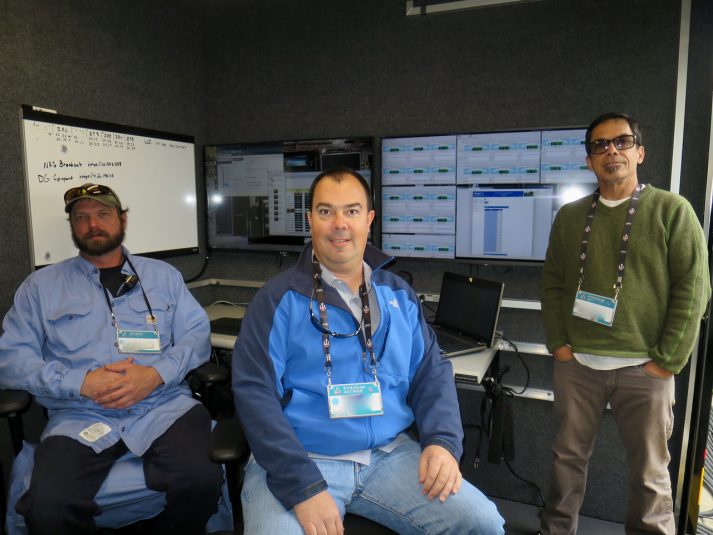 “The technical side of the Super Bowl production is using shore power with UPS riding over it for redundancy and generators ultimately backing up the shore power,” says CAT Entertainment Services VP/GM Greg Landa.

“The beauty of having the UPS online is, it offers redundancy and cleans up the house power by filtering out bad power so we don’t need to deal with sags or spikes,” says Landa. “It also offers fuel savings as the diesel generators kick in only when there is a power outage.”

The goal is to offer three independent power sources to ensure that any one power system could not take the show off-air. Game Creek Video’s Encore A, B, and C and Chesapeake units are running on UPS powered by stadium utility power and backed by auto-start 500-kW diesel generators.

Cleatus A and B, which handles the pre/postgame coverage, are powered by a separate 375-kVA UPS powered by a redundant generator package and backed up by a standby generator. The goal is to ensure that Encore and Cleatus are powered by completely separate systems so that, in the event of a major issue, one facility could be used in place of the other.

A third setup features a 500-kW twin generator set that feeds the non-technical power (lighting, air-conditioning, etc.) to the office trailers and Encore and Cleatus trucks.

The Fox studios at Discovery Green Park are hooked up to three 1,500-kW generators and one 160- and two 80-kVA UPS and are backed up by redundant generator sets.

Monitoring all the power systems is also easier than ever, thanks to a new system that allows the CAT team and others to monitor technical services from smartphones or computers. In the past, monitoring required going from one system to the next with a meter and writing down readings.

“Now we can see in real time what is going on with each service,” says Landa. “We can see the temperature of the breaker and can also preset parameters and then get a message immediately if something is out of range. That means we can quickly go in and take a look at the issue.”