Super Bowl LI will get the VR treatment, and, although it won’t be a live viewing experience, LiveLike VR and Fox Sports have worked together to provide a system that will allow viewers to watch highlights from six camera angles.

“The experience is 360 degrees, but it is a mixed-reality experience with 180-degree views of the field from six different perspectives as well as interactive elements like a table with stats and the ability to navigate between highlights, access replays, and even watch 360 clips from earlier in Super Bowl week,” says Fabrice Lorenceau, head of production, LiveLike VR. 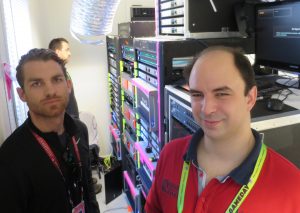 The cameras are Blackmagic Ursa Mini 6K cameras, and Lorenceau finds them great to work with because a single camera-control unit can run as many as 20.

“It is also fairly compact,” he adds, “which is good for VR as we are adding cameras to an already crowded place. The cameras can also go up to 12 Gbps.”

The output for this event will be 6 Gbps, but the EVS XT4K servers will record them as 12-Gbps inputs on two four-channel machines operating in a three-in/three-out configuration. VER is providing the XT4 servers as well as a Harmonic Media Grid server.

David Pinkel, sales manager for the Americas, EVS, is on hand for the big game and working on a few cutting-edge projects, the VR experience being one of them. 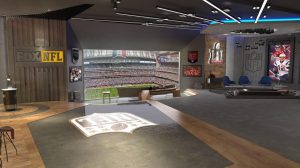 Fox Sports will offer an immersive-suite–like experience via VR.

“A year ago, recording 4K on XT3 would require four separate video signals. Now, with the XT4K, it can record native XAVC 4K as a single file and then hand it off to LiveLike,” he says. “It also has 12 Gbps support, so setting it up is much easier.”

The Blackmagic cameras and the EVS servers and IPDirectors create the images, and an Avid HDVG4 graphics is system is being used to add in scores, time, and other elements.

“They are augmented reality,” notes Lorenceau, “so they can be placed within the 3D space.”

The good news is that, although fans won’t be able to watch the entire game live, LiveLike VR and Fox Sports have the rights to show it as a VOD offering.