There will be a lot to see on the behind-the-scenes tour of the new U.S. Bank Stadium at the SVG Sports Venue Production Summit on March 13, but make sure you also get a good look at the “feel” of the place. It’s not always easy to pinpoint the specifics of what makes an experience design work, but, thanks to the specialized integration work of experience-design firm Infinite Scale, this venue has more than a few fine points that were carefully implemented to bring the “Skol!” to the Minnesota Sports Facilities Authority venue.

Infinite Scale’s work can be found in a wide array of sports venues and across an almost endless array of major sports events. The firm sets the foundation for fan experience through brand integration, signage, environmental graphics, and partner integration. 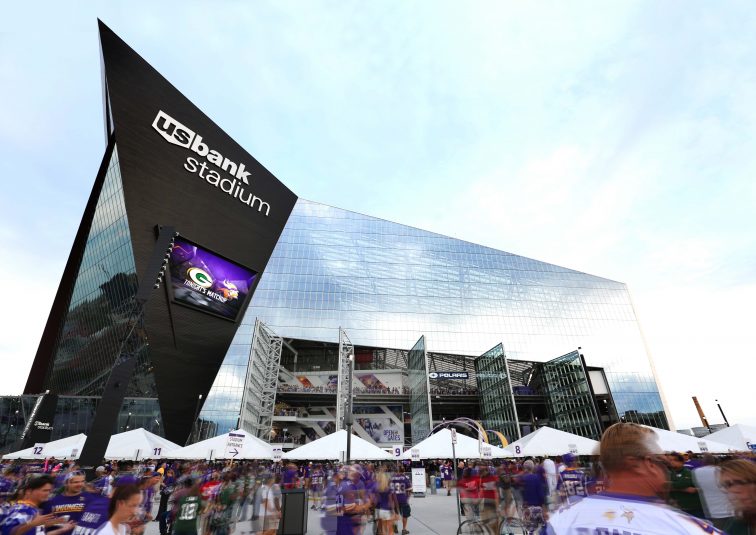 For U.S. Bank Stadium, Infinite Scale created a Partner Integration Master Plan that ensured that the spirit and values of its main tenant, the NFL’s Minnesota Vikings, as well as those of the region and the community, were woven throughout the structure. That means that the partners’ vision can be found throughout the venue’s signage and graphics, both seasonal and permanent Vikings branding, as well as in the thoughtful connection between the stadium’s 14 founding partners in brand activations throughout gate, club, and concourse areas.

“Anywhere visitors see a corporate partner, all the way from the plaza to the concourses to the interior bowl, that is something that Infinite Scale was a part of,” explains Molly Mazzolini, partner/brand integration director, Infinite Scale. “We helped map out the inventory of all those corporate partners and how they’re designed and implemented into the space.” A founding partner of the firm, Mazzolini implemented the multifaceted collaborative design-team approach (known as the Creative Council) that Infinite Scale brings to each project. 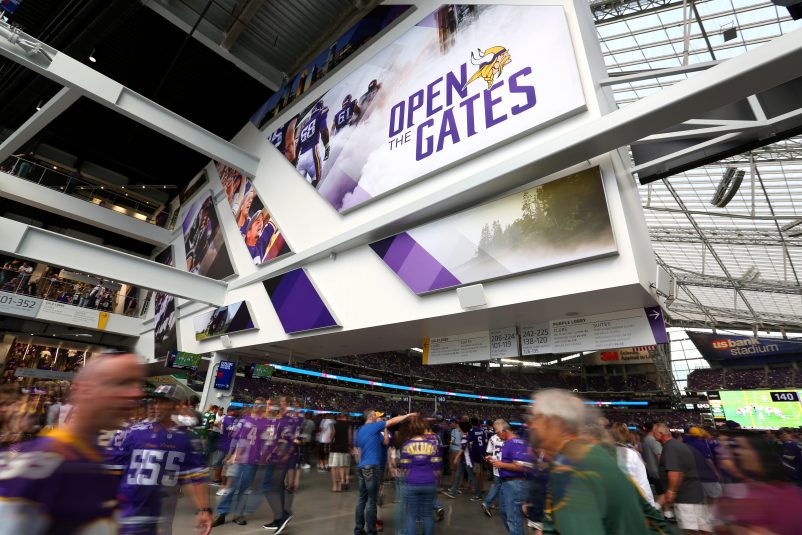 Over 18 months leading up to Opening Day, the Creative Council worked on brand integration, determining where Viking-specific pieces were placed and how corporate-partner integrations worked in and around those elements. These are realized across many layers, including video displays and digital signage, as well as in the permanent layer of imagery and event-specific graphics.

Walking through the stadium, make sure to take note of the special treatment designed for the rear of the scoreboards, and the Ring of Honor capping the stadium. Further, the “Open the Gates” look and feel complementing the stadium’s gigantic folding doors, was designed by Infinite Scale. The firm also consulted on placement of the American flag, and on the extensive artwork curated by Sports & the Arts throughout the venue.

On the scoreboards, the four static logos in each corner, along with all the static signage on the interior bowl, with corporate-partner placements around the rings, were all part of the Infinite Scale plan. “On the videoboard, the four corners with permanent logos were strategically done between the corporate partnership team and the Vikings to give them permanent brand presence in the bowl,” Mazzolini explains. 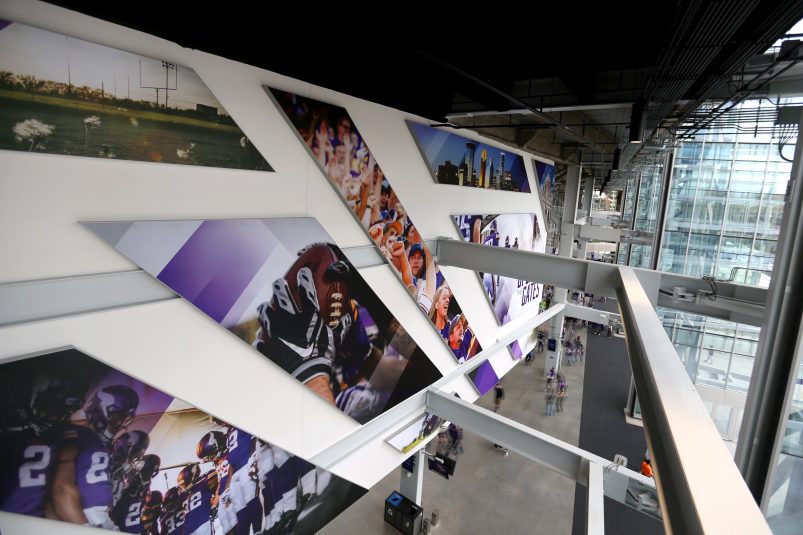 Artwork greets fans at the entrance and elsewhere around U.S. Bank Stadium.

Additionally, all corporate partners were entitled to brand activation somewhere in the facility, and that’s where some next-level creativity happened. Check out the video-projection mapping on the Ecolab activation and the digital signage around Polaris.

In terms of video production, Infinite Scale gets involved in a number of ways with the partners’ agencies and the team to “ensure a visual connection between what they’re doing in terms of brand activation and the digital side as well,” Mazzolini notes.

Having witnessed the evolution of brand integration and venue and events graphics since Infinite Scale was established in 2002, Mazzolini sees teams and partners working ever more closely on enhancing fan experience with a cohesive environmental design. “It’s not just trending, it’s the new standard,” she observes. “The last thing you’d want is a lot of segmented partner activation areas in a venue and there’s no association with a team.”

Walking through U.S. Bank Stadium, make sure to take a look at how all this visual integration worked out. Ultimately, throughout the collaborative design process, the goal of the various partners, team representatives, and technology providers is unified by one goal, and that is to deliver the best possible experience for the fans.