Harmonic will showcase cutting-edge innovations in 360-degree immersive virtual reality (VR) technology with a demonstration featuring prerecorded content of Blue Man Group from their stage at the Luxor Hotel and Casino in Las Vegas. In addition to the cutting-edge demo, Harmonic will host booth appearances by the highly acclaimed performance art company.

“Harmonic and Blue Man Group share a passion for stunning imagery that entertains and awakens the senses in new ways,” says Doug Baldinger, VP, creative development at Blue Man Productions. “This is the first VR experience for Blue Man Group. We look forward to working with Harmonic at the 2017 NAB Show and bringing our energy and music to life in the virtual reality domain.” 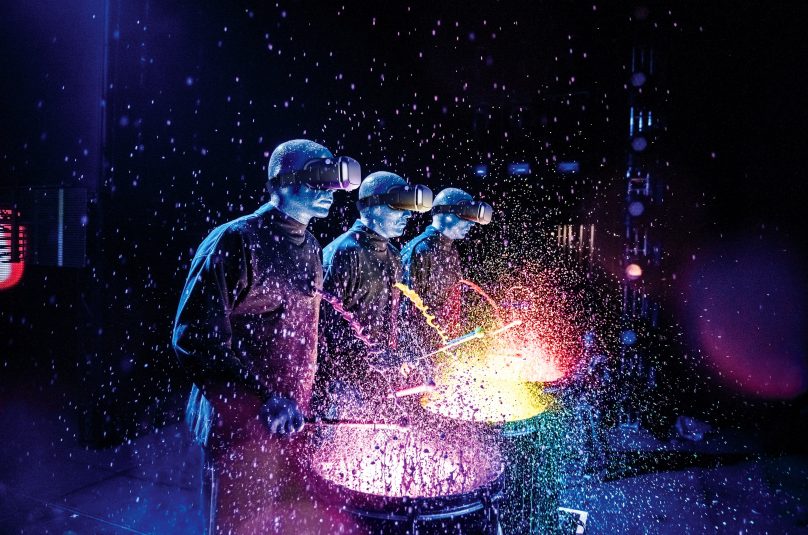 “Harmonic and its ecosystem partners are setting the benchmark for VR video quality and bandwidth efficiency,” says Bart Spriester, SVP, video products at Harmonic. “Collaborating with Blue Man Group makes this demonstration all the more exciting, as they truly exemplify innovation in entertainment, blending beautifully with the technology innovation being showcased by Harmonic. If you’ve never seen Blue Man Group or experienced the mesmerizing power of VR technology, stop by the booth and enjoy a one-of-a-kind show in native UHD resolution.”

The striking Blue Man Group content was shot live on stage by Digital Immersion using an innovative VR rig to capture dynamic moves and put the viewer into otherwise impossible perspectives during the group’s live performance. The video content can be viewed on YouTube, and can be streamed for viewing on Samsung Gear VR headsets at the Samsung store.

Additionally, at the 2017 NAB Show, experts from Harmonic and Tiledmedia will present the state-of-the-art in VR streaming and bandwidth reduction during a session at the Broadcast Engineering and Information Technology Conference. The presentation, “Streaming UHD-Quality VR at Realistic Bitrates: Mission Impossible?,” will take place on Monday, April 24 from 12:00 to 12:30 p.m. in room N260 at the LVCC.

Beyond developing innovations in VR technology, Harmonic is a founding member of the VR Industry Forum, which is committed to driving the widespread availability of high-quality audiovisual VR experiences by creating end-to-end interoperability of VR across key media and entertainment sectors.