Baseball fans pining for the days of dramatic tight shots of legendary pitchers staring down opposing hitters courtesy of the classic low-home camera position are in luck. ESPN’s new mirror-based robotic Front Row Cam system, developed in conjunction with VER and introduced during July 2’s Sunday Night Baseball telecast in St. Louis, aims to bring the low-home position, which gradually disappeared over the past two decades in favor of premium ballpark seating, back to live MLB telecasts.

“One of the biggest things missing [in current MLB coverage] was the low-home camera, [lost to] seats over the last 20 or so years,” says Phil Orlins, senior coordinating producer for ESPN’s MLB coverage. “So many memorable images of Clemens, Gooden, Johnson, Maddux, and on and on. We remember the great tight shots of their intense faces staring in at the hitter and the great super-slo-mo of their pitches. 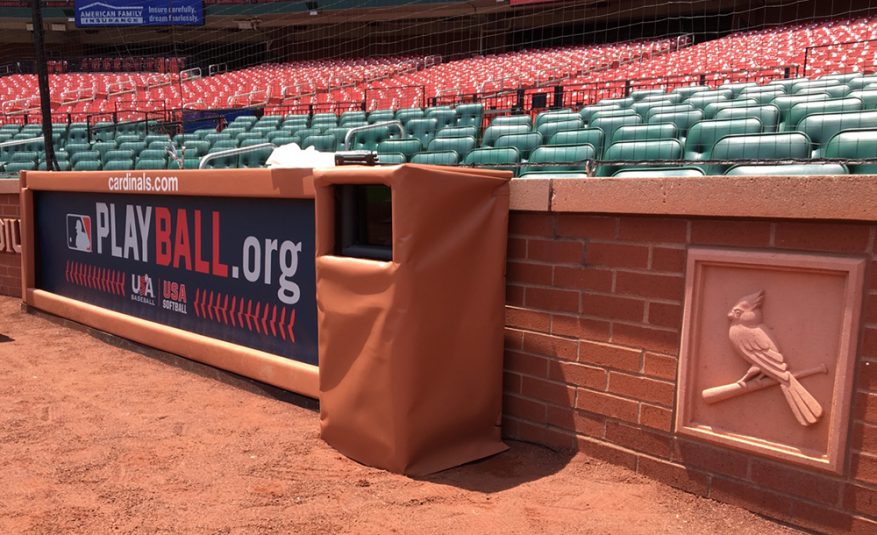 The compact Front Row Cam fits directly into the wall beside signage below the backstop.

“I told Steve [Raymond, senior technical specialist, ESPN Remote Production Operations] that, if we could ever develop a small robotic-camera option that could provide the tight shot of the pitcher’s face and super-slo-mo and be acceptable on the field, it would be great for baseball coverage,” he continues. “But it would need to be small and fit alongside the advertising signage behind home plate.”

The Guts of the Front Row Cam

Raymond came up with the concept of building a camera in a cylinder aimed skyward and shooting the image off a mirror. He worked with VER Director, Global Camera Operations, Patrick Campbell, who played an integral role in innovating mirror-based camera systems as Cameron-Pace Group CTO during the 3D–sports-production boom of the early 2010s, to create a system with a small enough footprint to serve ESPN’s needs.

Measuring 16 in. wide x 16 in. deep x 32 in. high, the system features a Sony HDC-P43 camera equipped with a Fujinon HA42x13.5 lens. The camera chain comprises a Sony BPU-4000 baseband processor unit (with high-frame-rate license), HDCU-2500 CCU, and RCP1500 remote-control panel inside the truck. The 6X slo-mo replays are handled by an EVS XT3 replay server. The entire system runs on two fibers into a Sony HKCU-SM100 CCU extension adaptor. 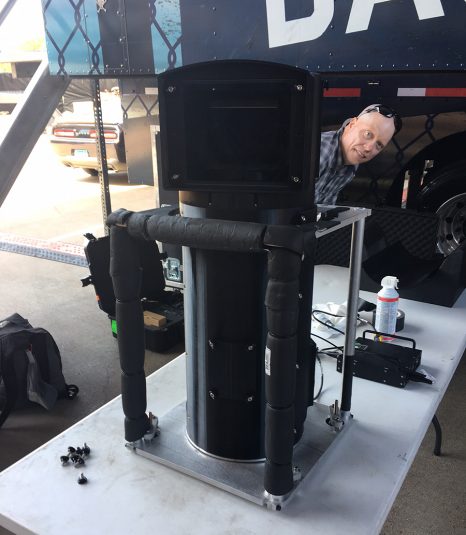 The Front Row Cam system also features a VER pan-and-tilt controller for the robo operator and a VER 3D-printed pan-and-tilt housing, which uses ABS (acrylonitrile-butadiene-styrene) material and was printed by a Stratasys Fortus 900mc 3D printer (taking more than 200 hours of printing time).

“We will continue to make software tweaks and mechanical tweaks, but, overall, [ESPN] seems happy with the size,” says Campbell. “From the tip of the lens to the bottom of the camera with the fiber-optic connectors coming out the bottom, there’s not a millimeter to spare. So now we’re working to tweak the external form factor being inside of a box to make it more seamless in the field of play.”

Development of the Front Row Cam

Orlins and Raymond say they have been searching for a viable replacement tool for the low-home camera position that could be approved by Major League Baseball for several years, but to no avail.

“We played around with a number of different solutions to improve that shot of the pitcher from home plate — including 4K cameras, bigger lenses, electronic zoom — but we found quickly that none of those technologies were as effective as optical zoom to give us what we wanted,” says Raymond. “And a lot of those [technologies] made the size of the package pretty ungainly.” 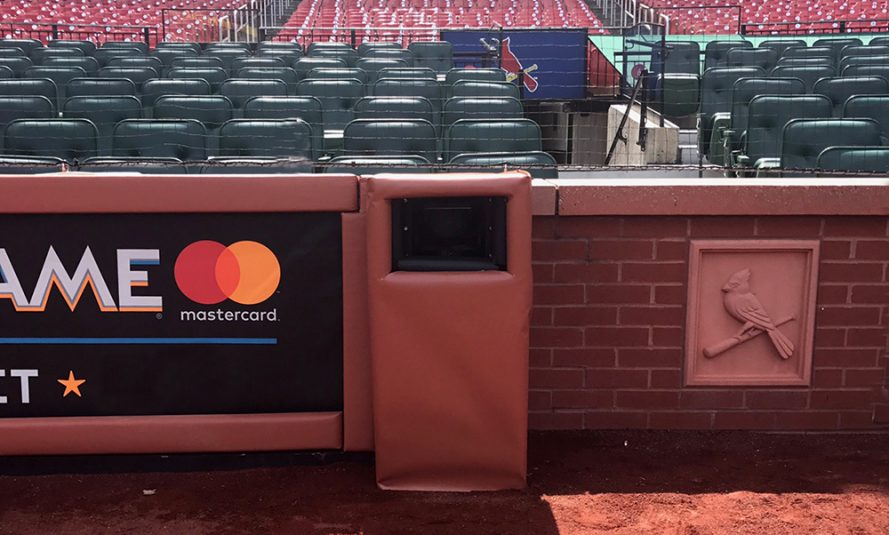 However, near the end of the 2016 MLB regular season, Raymond came up with the mirror-based concept and presented it to Orlins, who was intrigued. Raymond enlisted Campbell to build a mockup of the system featuring a cardboard tube with a 3D-printed mock head on it, a piece of glass as the physical representation of the mirror, and a Sony F-55 4K camera with a 42X lens. Orlins signed off on the concept shortly after seeing it, and VER kicked off the project in October.

The first prototype was deployed during 2017 Spring Training in March at the Texas Rangers’ Surprise Stadium in Phoenix. It featured a wider-angle 42×9.6 lens, which meant that the mirror and, therefore, the overall footprint had to be larger.

“It was determined that the first prototype used in March was just too [big],” says Campbell. “So, for the second prototype, we went back to the tight