Fox Sports isn’t waiting for Atmos and MPEG-H to become ubiquitous so it can make its MLB All-Star Game audio immersive. When this year’s game hits the air tonight from Marlins Park in Miami, more than 100 microphones planted and placed in and around the stadium will pick up every sonic nuance of the game. 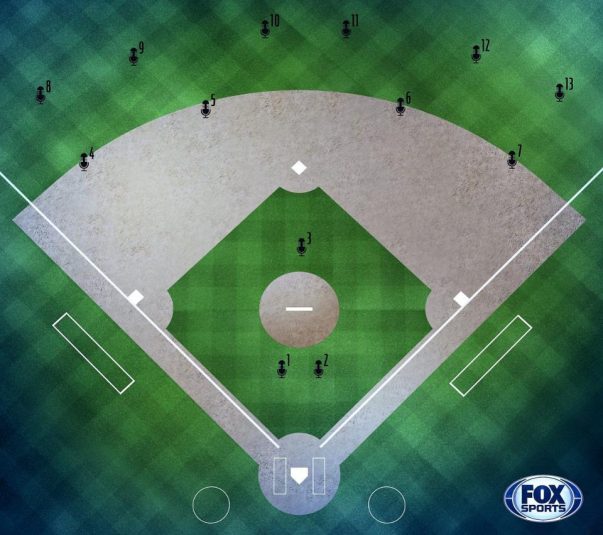 As was done for last year’s edition, Fox A1 Joe Carpenter and submixer Bob Qua are burying 14 RF microphones (provided by CP Communications) in the grass around the infield, including a pair just in front of the pitcher’s mound and a single mic just behind it. Others are positioned to pick up plays around each base. The Quantum 5X QT-5100 AquaMic units were picked for these placements, chosen for their resistance to moisture and their remote–battery-management capability.

The bases are also wired again, with wireless lavaliere mics, as will be four players (two from each team) and the home-plate umpire. Player and umpire microphones, which are Quantum’s PlayerMic, will be supervised by Carol Langley, working with an MLB rep, to pull that sound from a dedicated EVS deck. Submix A2 Anthony LoMastro will be kept busy changing lavalieres as players rotate in and out of the game.

A total of four Klover large parabolics, two per side, are being deployed; their bearers will be wearing helmets, reflecting how close they will be to the first- and third-baseline action. Three midsize Big Ears parabolics are covering home plate, lodged in padded boxes to increase their isolation from ambient noise. “I’ll be able to grab a lot more gain on the front end,” notes Carpenter.

For starters, it’s the debut outing for Game Creek’s Yogi truck, Fox Sports’ new MLB wagon. In addition, all the audio consoles used during the game — a dual-layer Calrec Apollo aboard Yogi, a Calrec Artemis in Game Creek Maverick for the studio show mixed by Mark Butler, and a Calrec Brio used by Qua for the submix done from the announce booth in the stadium — will be networked for the first time. Fox Sports is deploying a Calrec Hydra2 network around the compound and stadium, part of the 3-plus miles of fiber-optic cabling containing 264 strands of fiber used for this year’s show, providing 1 Gbps of broadband connectivity. A total of five Hydra boxes will be deployed: three at the mix positions, one each at the booth and the studio set.

“This is definitely a milestone this year, moving completely away from copper,” says Carpenter. “We’re also using the Hydra Patchbays, which are virtual patch-points within the Hydra2 that allow us to patch DSP outputs to each console, so we’ll be able to take any source from any console to any console. Pretty cool.”

Underscoring the sprawl of the effects coverage, Carpenter will be mixing the infield mics himself, something he says the additional faders on the Apollo will facilitate. He’s also apportioning eight channels from EVS playback decks discretely to four or so cameras covering the infield.

“Cameras 2 and 4 are the main game cameras, and they’ll usually cut to [Camera] 2 as soon as the ball is hit, so I’ll use all eight channels to isolate that,” he explains. “If the play goes up the left side of the field, I’ll have Channels 5 and 6 for that; if it’s up the right side, I’ll have Channels 7 and 8. It gives me more of a chance to keep the sound tight on the picture.”

The audio team will also be working with a new director this year. Matt Gangl takes over from the late Bill Webb, who had directed 18 All-Star Game broadcasts since 1996. “I worked with Bill for years, and we got used to a certain set of tape machine assignments,” says Carpenter. “Matt and I will be working out how he wants that ahead of the game.”

What they won’t be doing this year that they did in 2016 is share much of the microphone infrastructure on the field with ESPN, which broadcast last night’s Home Run Derby, and the MLB Network, which showed Sunday’s All-Star Futures Game. That has to do with the fundamental focus of each show’s sound: the Home Run Derby homes in on the sounds directly around home plate, whereas the All-Star Game itself pulls in broader audio from across the field. “[Mixers for the Derby] tend to shorten their focus,” Carpenter notes, “while we tend to widen it.”

Fox Sports is building on the things the production team experimented with in spring training a few years ago and put into place last season for the All-Star Game and postseason play. “You’ll hear what we learn from this during the playoffs,” he says. “Every year, it gets better.”