This year’s MLB All-Star compound at Miami’s Marlins Park comprised the primary truck dock and three parking lots across NW 14th Ave. To connect the satellite compounds with the ballpark’s truck dock, Filmwerks erected massive ModTruss cable bridges running over the active street. In all, more than 15 production trucks were deployed to serve the needs of ESPN, Fox Sports, MLB Network and its world feed, NHK (in its own Sapphire mobile unit), and other broadcasters. Here’s a look at the respective efforts of Game Creek (Fox and MLBN), NEP (ESPN), and Dome (MLBN World Feed) in Miami this week, as well as CAT Entertainment Services, which powered it all. 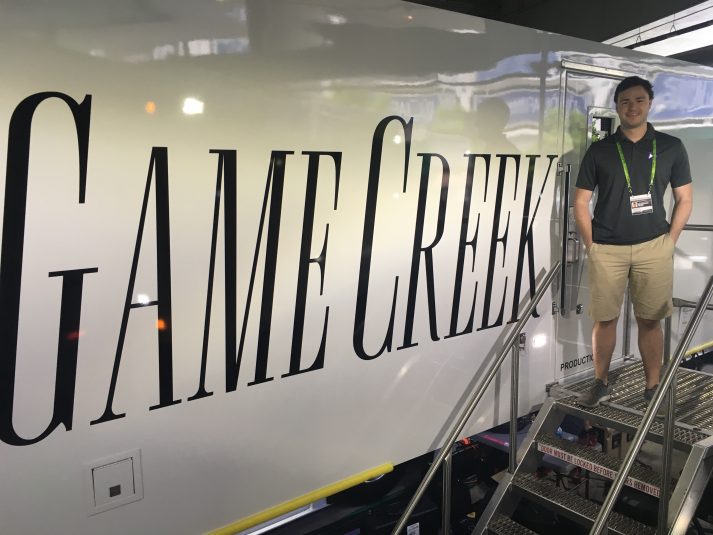 This year marked the debut of both Yogi as Fox’s primary truck and Riley Helsen as the truck’s engineering manager at MLB All-Star.

“The biggest advantage with Yogi is the benefit of an IP routing core, which has allowed us to connect the pregame and other game trucks with Yogi more effectively,” says Riley Helsen, engineering manager, Game Creek Video. “We deployed a set of seven Evertz remote IP gateways at the pregame trucks that allow [seamless] video sharing between the game trucks and pregame trucks. That’s reduced copper count, and it’s also made it a lot easier to get [high-speed] bandwidth back and forth over fiber. It was a very quick setup, but it has allowed us to do a lot more.”

Helsen also says Game Creek boosted Fox’s Calrec Hydra2 network at All-Star this year. A total of five Hydra boxes were deployed: three at the mix positions, one each at the booth and the studio set. So that is an entire audio network is running on Hydra2.

Yogi’s debut marks the end of an era, the FX trucks having served Fox at All-Star for 11 years. Fox will now use Yogi for both All-Star and the World Series (replacing Game Creek Dynasty for the latter), and the broadcaster was able not only to get comfortable with Yogi in Miami but also to experiment with new technologies, such as the Sony HDC-4800.

“This will be the first time we can start preparing at All-Star with the same truck that’s actually going to do the World Series,” says Bryan Rule, engineering director, Game Creek Video. “Also high frame rate is really important this year, with two 4800’s and three [Sony HDC-4300’s], and I expect that to continue for [MLB Postseason]. That’s the beauty of the All-Star Game for Fox: they push some technological boundaries to see what will work at the World Series.”

Next to Yogi in Fox’s compound at Marlins Park sat Game Creek’s Edit 2, which essentially served as a C unit for the production. Across NW 14th Ave. in the E3 lot, Game Creek Video’s Maverick and B4 mobile units served Fox’s onsite studio productions, including the pregame show and The Herd on Monday and Tuesday.

“From the beginning, we tried to create as integrated a compound as possible and bring Yogi, Edit 2, Maverick, and B4 together as an interconnected four-unit system,” Helsen explains. “Logistically, that can be tough when there is 1,000 ft. of distance between your pregame and game trucks, but it has been really successful.” 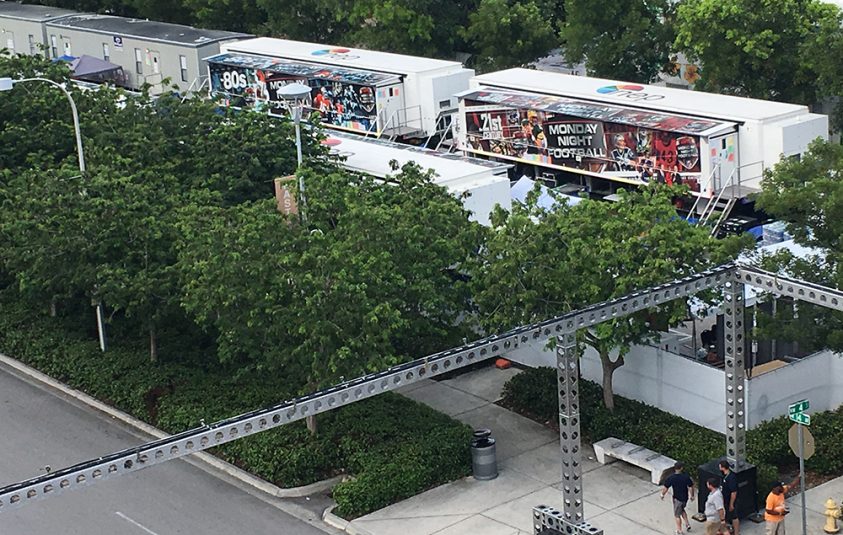 NEP provided its EN1 five-truck fleet for the Home Run Derby and other ESPN productions in Miami.

The five-truck EN1 fleet, which serves as home to ESPN Monday Night Football each fall, was designed specifically for multifaceted productions like All-Star. This year, NEP maintained three dedicated control rooms: two in the A unit for the Home Run Derby and pre/postgame programming and another in the D unit for ESPN Deportes, which had Beisbol Esta Noche, and ESPN2’s Nación ESPN onsite.

“We have seen a lot of growth over the last several years, and the Deportes portion was much bigger this year,” says EN1 EIC Bruce Hogenboom. “These trucks are designed to handle that, though. Every [feed] comes to the B unit, and then we’re able to support all the different control rooms from here — almost as a fixed facility would. But, unlike with a fixed facility, at the end of the day, we can roll away.”

Now in his 15th year working ESPN’s MLB All-Star/Home Run Derby show, Hogenboom knows first-hand how much the production has grown over the years.

“The biggest change has been all the other shows that have come out on the road that we are supporting now,” he explains. “It used to be that, when Baseball Tonight or SportsCenter came out, they would be in a completely separate truck and there was very little interaction between [the Derby and the studio show]. That resulted in a lot of duplication of effort and inefficiency. About eight years ago, we started integrating all of the shows through one central control room on [ESPN’s previous All-Star truck] SS25. We’ve further expanded that over the years, now in EN1, and, today, I think we are being as efficient in sharing all the equipment and resources as possible.”

Dome Productions Unites the Compound for World Feed
Dome Productions’ Journey and Unite mobile units were in Miami to serve the MLB All-Star Game world-feed production (managed by MLB Network), as well as a variety of needs for MLB Network, including Sunday’s All-Star Futures Game show. 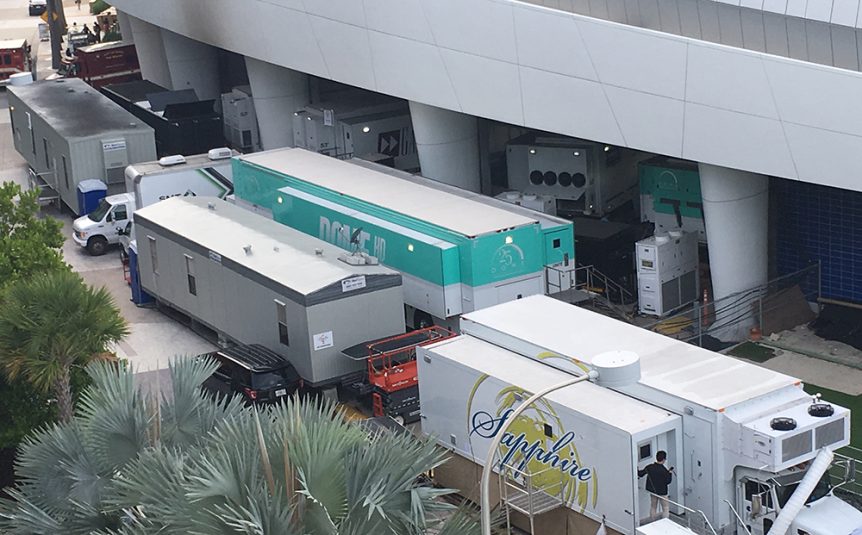 Dome Productions’ Journey and Unity were in the primary truck compound serving the MLB World Feed.

Dome’s five-person crew and the two trucks pulled in on Friday and began setting up. Journey served as the production hub for MLBN’s Futures Game on Sunday, which featured nine hard cameras and a handheld, before resetting on Monday for Tuesday’s MLB world-feed production, which incorporated seven hard and two handheld cameras with feeds from Fox Sports’ domestic broadcast.

Meanwhile, Unite played its signature role as a jack of all trades. Dome can quickly adjust the versatile mobile unit to serve a variety of functions depending on client needs. In addition to essentially serving as Journey’s B unit, Unite housed a large portion of MLBN’s encoding racks and comms, a viewing area for MLB execs, a QC area for virtual signage, and more.

“This is a multipurpose truck, so there are a number of things that we do out of here,” said Kryst Budziak, director of production services, Dome Productions. “This is different from the [role Unite plays] at the World Series, where we have a lot of international broadcasters, so we use the truck for different purposes here.”

“It’s very easy and flexible when it comes to last-minute decisions, which happen a lot [at All-Star],” says Budziak. “If someone needs something [on short notice], the truck is set up to be able to change over very quickly. The beauty of this is that it can hook up to any of our trucks. It’s a floating vehicle that can do a lot of different things.”

CAT Entertainment Services Provides the Power
CES powered the primary compound at the ballpark, as well as the satellite compounds across the street. As has become its norm, the All-Star veteran deployed power systems embedded with electronics, software, sensors, and network connectivity that enabled all system components to collect and exchange data.

“We have been doing All-Star for more than 10 years now and between this and the postseason; we are always proud to be asked to the table,” says CES Account Executive Bobby DeLuna. “We are constantly innovating and evolving the equipment to meet the needs and wants of the clients. Every year, we come out of an event like this and ask, ‘What could we have done better, and how can we adjust our package to better serve the client while being less intrusive?’ We will do the same thing this year, and we are extremely proud to be here every year.”

This year, CES had six crew members onsite and powered the E3 lot, which housed MLBN’s and Fox Sports’ studio trucks, using two parallel generators and a 375-kVA UPS for MLB and a separate redundant generator system for Fox.

“[Our presence] is very similar to last year [in San Diego] except for the addition of Fox’s three trucks and their trailers [for pregame and FS1 shows] and all the supplemental air-conditioning that’s required because of the intense heat,” says DeLuna. “There are a ton of air-conditioners out there precooling the air and going into the on-board air-conditioning units as we do when it’s hot like this.”

Inside the ballpark, CES also powered Fox’s sets, providing 6-kVA UPSs and utility power for the primary Fox Sports set, as well as a dedicated UPS and utility drops for The Herd set — an addition for CES this year. The company also provided two 6-kVA UPSs in the announce booth.

CLICK HERE for look at other the cameras, sets, and other technologies deployed at the event.