It’s no secret that most sports broadcasting still features stereo sound, and there might be more mono listening going on than some in the industry would like to think. But the mixes from the onsite production need to remain at the cutting edge, and discrete 5.1 on-air sound has been the standard for the basic mix for at least major-league shows for the better part of a decade. However, sports broadcasting is on the cusp of its next transition: from multichannel to immersive sound.

Such systems as Dolby’s Atmos, Fraunhofer’s MPEG-H, and Barco’s Auro are competing to deliver seven to 22 channels into the home. Atmos’s 5.1+4 iteration (a standard surround array plus four overhead channels) has been the leading contender in the U.S. since the inclusion, in late 2015, of Dolby’s object-capable AC-4 format as part of the ATSC 3.0 standard. 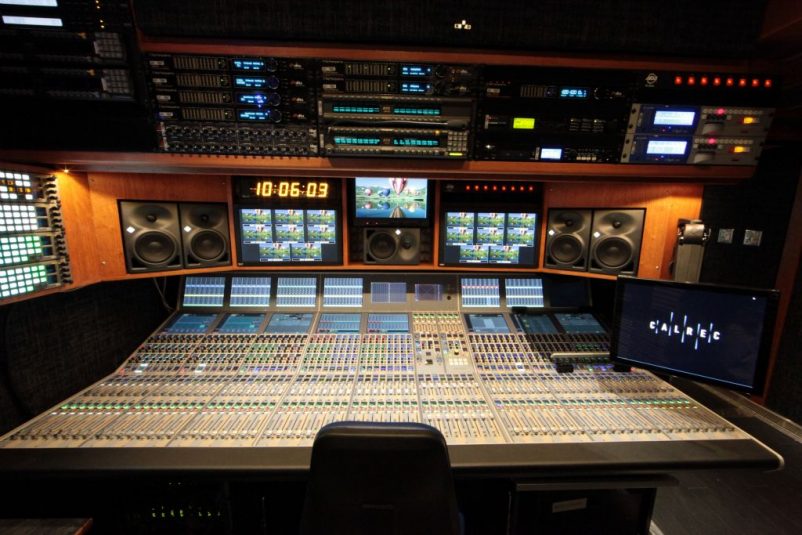 The audio compartment in production trucks like Game Creek’s Madison will have to be retrofitted with additional speakers for immersive sound.

Consumers, many of whom have been confounded by surround’s six channels, seem to be embracing soundbars as an alternative to adding even more loudspeakers into the living room. But, in the trucks on the front lines of sports production, immersive sound’s extra speakers will have to go somewhere.

At Game Creek Video, a few sports clients have expressed passing interest in immersive audio, according to VP, Engineering, Paul Bonar, but that’s as far as the category has gone in remote-production–truck design. “We’ve had no requests for anything concrete and just limited discussions about the topic,” he says.

Many truck audio compartments already house seven or more speakers: the standard L-C-R and L-R rear arrays, plus more subwoofers on the floor (the .1 channel) and, most recently, more transducers dedicated to production input from producers and directors.

“[A1s] want to hear that kind of audio coming from dedicated speakers in different parts of the room,” Bonar explains, “so they know who’s talking just by the direction it’s coming from.”

Sometimes another stereo pair is installed just for pre-fader monitoring. (Speakers can take the form of either conventional bookshelf types bolted to walls and ceilings or speakers embedded in A/V monitoring units, such as Wohler’s AMP Series rack-mounted systems.)

Other key hardware and software elements to support immersive audio, such as audio consoles, are also still over the horizon, notes Jason Taubman, VP, design and technology, Game Creek. “Clients are also still working on how they want their audio monitors configured in relation to their video monitors [in the audio compartment]. There are a lot of pieces still being moved around, so adding more for immersive audio will complicate that.”

However, Bonar says, it’s not inconceivable that Game Creek could make at least provisional accommodation for additional immersive speakers in the near future in designs. “It’s something we might consider. And it would not be a big deal to retrofit [our trucks] for the extra speakers in the ceiling. We know where they’d go if they want them.”

A Large Number of Variables

NEP Broadcasting also has had little direct customer input on the immersive front. VP, Systems Integration, Joe Signorino says his team has been considering various approaches to speaker placement in the event that the call comes for an Atmos- or Auro-capable audio compartment. The number of variables is considerable, he notes, ticking off the different form factors of various speaker brands and models, how much more bulk the powered versions of speakers take up, and how the installation of ceiling speakers — the signature piece of next-gen audio — is complicated by how dense things get behind each compartment’s ceiling.

“Retrofitting existing trucks could be especially challenging,” he explains. “And, with more and more speakers into the same amount of space, you could start to encounter problems having enough space to achieve proper imaging.”

Gerling Associates fabricates most of the rack-ready and turnkey production vehicles used in the U.S. President Fred Gerling says he has not heard any specific inquiries about speaker-array designs for immersive audio. However, he notes, the instructions coming from his clients, including NEP and Game Creek, lately increasingly specify more provisions for speakers — that is, the trimmed cutouts into which the finishing companies will install the actual speakers — than in the past and for more monitors in the audio compartments’ ceilings, which would be the location for most dedicated immersive-sound speakers for broadcast applications. It’s a trend that might hint at what the future holds.

“The number and locations of additional speakers is changing lately,” he says, adding that that can complicate the esthetics of the trim around those additional speakers, as different configurations for these new audio monitors get worked out. “Audio is changing, but what doesn’t change is that they still want these trucks to look good.”

Truck developers waiting to see what their audio compartments will look like in the future have little definitive to go on at the moment. But they are aware that there only will be more speakers in them than ever before. For now, they’ll be mostly cutting virtual holes in the ceilings of CAD designs while waiting for their clients to make some long-range strategic decisions.