The kickoff of the NFL season may be just days away, but there’s another professional football league on the horizon, ready to shake up the way fans watch gridiron action: the American Flag Football League.

The AFFL, which fielded its first game on June 27 at Avaya Stadium in San Jose, CA, is set to launch next summer and plans to use technology to create a wholly revamped football-viewing experience. From using a Skycam as the primary game angle to RF cameras inside the huddle to SMT virtual graphics and augmented-reality elements strewn across the field, the AFFL is looking to bring the style of Madden NFL videogames to reality.

“We decided that, instead of doing this like NFL or college, why don’t we try to [produce] it the way Madden NFL [videogames] look,” says Johnathan Evans, who served as executive producer and director of the production in June. “We want to be more in-your-face and on the line of scrimmage. Why do we need a camera that’s a hundred yards away, using all of its lens, when we can put a camera literally 20 ft. behind the line of scrimmage to give us the perspective of the quarterback in the huddle? The NFL and college [broadcasts] have done a great job, but they don’t have the flexibility and can go only so far. We have almost no limitations.”

A Very Different Kind of Football

The 7-on-7, no-contact 60-minute AFFL games feature many of the same rules that average Americans know from their backyard games. The same players are on the field for both offense and defense, and a team must go 25 yards for a first down. There is no blocking; instead a “Go Clock” indicates when the defense can rush the QB (after two seconds) and when the QB must release the ball or cross the line of scrimmage (four seconds). There are also no field goals (or uprights, for that matter), and kickoffs are replaced with throw-offs. 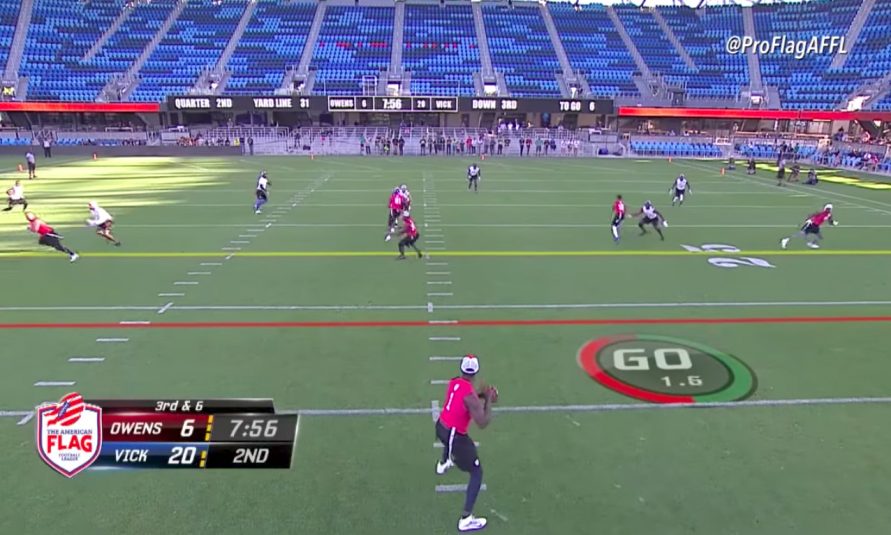 The AFFL broadcast relied on the Skycam as its primary game camera and featured a host of virtual graphics on the field, including the “Go Clock.”

The “e-flags” themselves were developed by SMT and have a live, online, location-trackable and time-stamped magnetic-sensor release mechanism. When a flag is detached, a signal is sent to wide-band wireless receivers, located in the stadium, which record players’ movements 15 times per second. The system runs on SMT’s Oasis platform, which provides visual tools and data displays to track all on-field player movements and flag statuses to accurately spot all flag-release events for both officials and the broadcast.

League founder Jeff Lewis (a bond trader to who came up with the idea after seeing his son play flag football) approached Evans, who is currently lead director at HBO Sports, in January with an offer to lead the production efforts for the first game, which was shown on the videoboard at Avaya Stadium and streamed online.

“To be honest, when I first heard the idea of putting flag football on TV, I thought it was just a cute novelty item,” says Evans. “Once I actually started watching it, I immediately saw how it could make for compelling TV if you shot it from the right angles, cut it correctly, and found new ways to make it entertaining for the viewer graphically.”

The AFFL game production deployed a total of 12 cameras, with very few corresponding to traditional NFL or college-football coverage. In addition to the Skycam (outfitted with a Sony HDC-P1 camera) as the primary game angle, the production included more low-end-zone cameras than typical football coverage has: two at left/right near the end zone and two Sony HDC-4300 6X slo-mos at left/right far end zone. In addition, the two up-cameras at the two 25-yard lines were lower than usual to prevent looking on top of receivers and to get the cameras lower to the ground. 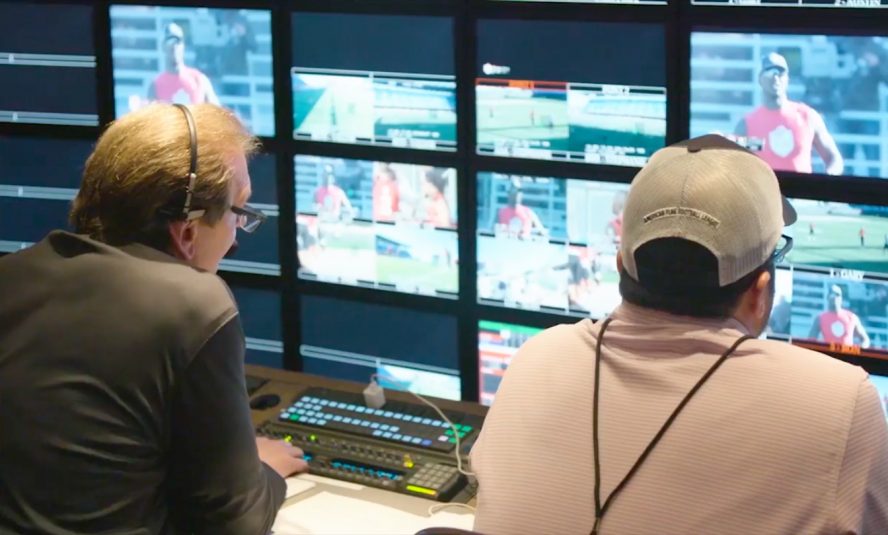 These positions were deployed in an effort to create a more dynamic, Madden-like feel, as well as to allow Evans and company to capture iso shots for replays of the nearly constant big plays made by receivers throughout the game.

“During the scrimmage game [prior to the San Jose game],” says Evans, “we realized that we had to totally reshuffle the deck for our isos plan because it just didn’t work for this sport: it’s too fast-paced, too spread out, and too many isos are needed. We ended up with two up-top cameras and four low-end-zone cameras — compared with the one or two you would have for an NFL broadcast. The idea was to take two of our low-end-zone [cameras] — one left and one right — and cover the low receivers. Then our up-top cameras picked up the high receivers. And we have two [super-slo-mos] in low-end zone following the game action.”

In addition, the cart camera on the sideline featured a jib. Inertia Unlimited also provided three POV cameras, placed on both coaches and the ref. 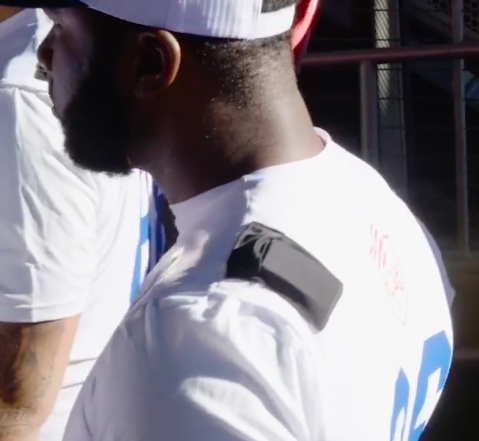 Each player wore a transmitter on his shoulder to deliver the signal when a flag is disconnected.

A MōVI RF camera was on the field behind the line of scrimmage before and after 80%-90% of the snaps and was allowed to get inside the huddle and be on the field for player reactions.

“We didn’t want to have just the [Steadicam] shot of the quarterback walking out at the beginning of the drive and the touchdown at the end of the drive like in the NFL. In this league, the MōVI is on the field for almost every snap. That part was really driven from the XFL, which I loved, but, unfortunately, the technology just wasn’t there yet. Fast-forward to 2017, and that type of cutting is definitely available and made a big difference.”

Inside Game Creek Video’s Glory production truck (A and B units), Evans called cameras alongside Fox Sports’ lead MLB producer Pete Macheska. The crew was made up primarily of NFL production veterans, including Technical Producer Colin Deford, whom Evans credits with helping make this high-tech vision a reality.

The SMT Factor: E-Flags, Go-Clock, Virtual Graphics, and More
SMT and its OASIS platform not only provided the AFFL e-flag technology but also designed the graphics package for the first game and provided on-field virtual graphics, including the line of scrimmage and first-down lines and the “Go-Clock,” which indicates when the defense can rush the quarterback. In addition, the OASIS platform integrates and synchronizes the Go-Clock timer with the in-stadium displays.

“For the AFFL,” says Jim Arleth, VP, OASIS platform, SMT, “we used that same platform but instead put those same sensors on the athlete’s belt [and] connected [them] to the flags. The flags have a magnet in them, and, as soon as the flag gets pulled away from the player and the magnet moves away from the sensor, it would transmit a Bluetooth packet locally to the tag on the player’s shoulder, which then relayed it to our secure pipeline. Then we knew where the player was at the time that the flag was pulled, and we could pass that information back to the referees.” 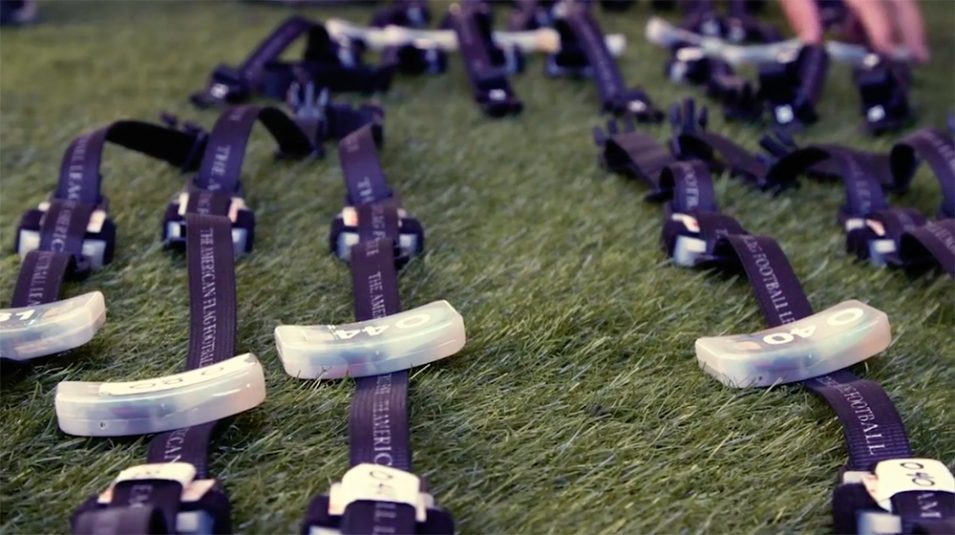 SMT’s sensors were integrated into the flags for the AFFL game.

“It was truly a clean slate when we went into it: the AFFL had the logo, and that was about it,” says Michael Guastaferro, creative director, SMT. “They knew that they were building something completely unknown, both the sport itself and how to represent that visually. While the technology used [in the production] was very forward-thinking, the logo and the package itself ended up having a very classic sports-broadcast look. They really wanted to keep it within the realm that traditional football fans are looking for, rather than a futuristic sci-fi or ultramodern look. It was very collaborative and a lot fun to work with the team over at AFFL.”

Adds Dino Hall, business development manager, SMT, “They were very happy with how everything went overall, and we were as well. We have begun discussions with them about next year, and we’re extremely excited about the potential of our technology to be used on [the AFFL] in the future.”

‘Astronomical’ Potential for Great Audio
In addition, the production team deployed 16 wireless mics recording audio on various players and coaches throughout the game.

“[Wireless mics on the field] is nothing new,” notes Evans, “but we’ve never had the flexibility that we had with those 16 wireless mics on football. Being able to literally listen to almost anyone on the field kept the viewers engaged into the broadcast. I think the potential, when it comes to audio, is going to be even more astronomical based on the workflow that we have.”

A League of Its Own: Kickoff Slotted for 2018
Retired NFL stars Michael Vick (a member of the AFFL Board of Advisors), Terrell Owens, and Chad Johnson appeared in the game in San Jose, and the AFFL plans to launch an eight-team league following a Flag Football US Open tournament to find the best players and teams from across the country.

Although no broadcast or streaming deals have been announced, there’s no question the AFFL is committed to creating a high-tech viewing experience for fans. Evans sees the potential for even more high-tech fun once the season starts next year.