Competing formats complicate the issue, with MPEG-H having a slight edge over Atmos

If it seems as though much of the broadcast-audio workforce is still learning some of the ins and outs of 5.1 surround sound — and a quick search reveals no shortage of academic and practical training sources — and now has to get ready for the imminent arrival of immersive sound, which literally doubles the channel count and then some. Broadcast sports in particular has been the focus of much of immersive audio’s marketing and demonstration materials, so it’s not surprising that sports is the tip of the spear when it comes to training.

Click here for Tech Focus: Immersive Sound, Part 1 — The Battle Between Speakers and Channels Rages On.

Although Dolby’s Atmos and its broadcast iteration AC-4 have been named the primary carrier format for immersive audio for the U.S. via the ATSC 3.0 standard, Fraunhofer Institute’s MPEG-H format may have an edge in terms of highly focused training on the use of its codec in sports broadcasting. The company recently competed a brief but intensive training program in MPEG-H for South Korean television broadcasters, as part of that country’s implementation of ATSC 3.0 (MPEG-H is listed as an option in the standard). It also came ahead of the first implementation of an immersive-audio codec for an Olympics broadcast, with South Korean national broadcasters slated to act as host broadcasters for the PyeongChang 2018 Games.

Fraunhofer outfitted a training and demo facility in each of three broadcasters’ facilities in Seoul with 7.1+4 monitoring systems — including immersive soundbars, which are considered critical in helping to accelerate uptake of the new format by consumers — as well as instructors to assist the Korean engineers to train their colleagues. At the time, the curriculum was essentially ad hoc, using marketing presentation materials along with technical white papers to get the concepts across, according to Stefan Meltzer, Fraunhofer’s technology consultant, who supervised the training process.

Subsequently, Fraunhofer has been making plans to extend this training, if the need arises. “It’s possible we’ll extend this model as other countries adopt [MPEG-H], depending on the market requirements,” says Robert Bleidt, GM, audio and video codecs, Fraunhofer. “Korea especially needed this since they have very limited time before the Olympics, and their broadcasts have traditionally been stereo, though the old system supported up to 5.1.”

He adds that Fraunhofer will also shortly launch a consumer-oriented web portal to explain immersive audio’s benefits to viewers, most of whom will experience immersive sound through soundbars that LG and other manufacturers are filling electronics stores with.

Dolby has been considering what form training protocols should take for its AC-4 format. Although there are no formal plans yet, Jeffrey Riedmiller, VP, Sound Group, in the CTO Office, has said that a curriculum has been taking shape internally around object-based audio.

Hard Look at Hardware for Immersive
Manufacturers of broadcast-audio equipment can do little more than read the white papers and wait for customer demand to develop. Chris Fichera, VP, broadcast and production, Group One, which markets DiGiCo and Calrec consoles, says an MPEG-H demo he observed required two separate but simultaneous mixes to manage all the channels. 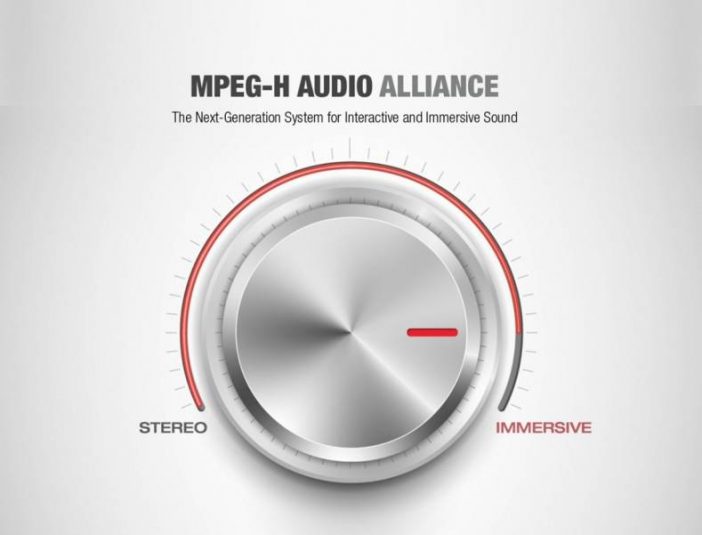 “There aren’t enough [auxiliary channels] on a typical broadcast console to handle that kind of live mix yet,” he explains. “The hardware and the software still have to be developed for immersive. At DiGiCo and Calrec, we’ve looked at it, but, until someone specifically requests it, it won’t go into play.” And, he adds, that demand will likely have to come from the network level, “which is how it happened for 5.1.”

In fact, UK broadcaster Sky is trying to stimulate such demand by applying immersive-audio techniques to selected sports broadcasts with new consumer products that can mimic some of the object-based audio functions at the heart of immersive sound. Specifically, “dynamic–volume-management” software in the Sky Soundbox will analyze incoming audio in real time and adjust volume levels to ensure clarity, as well as allowing viewers to enhance or diminish the center dialog channel. Sky subscription customers can purchase the French-made Soundbox, which usually retails for a little over $1,000, for less than $400. It’s a top-down strategy that parallels what Korean electronic manufacturers are doing with MPEG-H (which, like Dolby AC-4, is a fully discrete multichannel format).

German console manufacturer Lawo’s mc296 console, introduced at NAB 2017 in April, has an integrated dedicated elevation controller, which will allow placement of audio objects and channels in overhead locations when immersive formats are used.

“In fact, immersive is a big topic for us,” says Jeffery Stroessner, head of sales, Americas, at Lawo. However, he adds, “As immersive

is more then just the console but also the chain after the console, it would only make sense to have all the right players on board [before] offering [immersive] training. I guess IBC [Sept. 15-19, Amsterdam] will also shed some more light onto where we are heading.”

We’ve Been Here Before?

However, if and when the industry finds itself on a fast track toward immersive sound, it may require equally rapid ways to disseminate training for it, particularly among the widely scattered freelance A1s in the U.S. broadcast-mixer pool. For that, Fichera says, a useful template might already exist: “Television,” he says, referring to demonstrations of object-based mixing for cable shows such as Starz’s Black Sails, whose mixers have discussed their techniques used at SVG and DTV Audio Group events. “It’s already being done on television. It’s a pattern broadcast sports’ training can follow.”