Insider Perspective: How Turner Launched a New Sound for ELEAGUE

Esports is a phenomenon, rapidly evolving into a multibillion-dollar-per-year industry with media companies vying for a growing audience. In 2016, Turner, in partnership with WME/IMG, formed ELEAGUE, an organizer of professional esports competitions, to develop this growing sector. Here is a look at the process that the Turner audio teams established to create and manage ELEAGUE production. 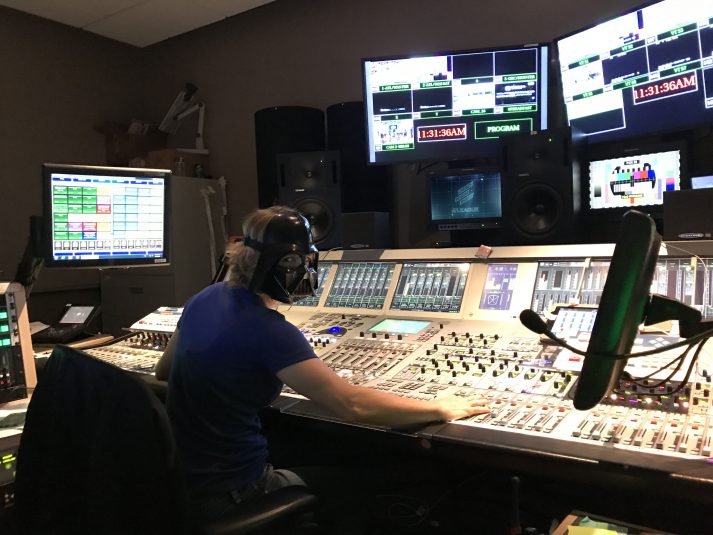 In keeping with the ELEAGUE spirit, Karin Weitzman sports a Darth Vader mask at the audio console at Turner Studios.

We started discussing ELEAGUE audio specifications as 2016 NBA Playoffs were getting under way. Given the compressed planning time frame and the playoffs workload, design and installation of the audio infrastructure was a collaborative effort with the engineering team. We were walking into a brand-new venture for Turner Sports, and, unlike traditional sports, it allowed us control over all aspects of production: we were the arena, the remote truck, the studio-show truck, and the integration facility all in one. This created several technical and operational challenges.

The set is located in Studios D and E in Turner Studios’ Atlanta facility and takes up approximately 95% of the 10,000-sq.-ft. studio. A theater-in-the-round setup, it incorporates a 300-person audience, a motorized broadcast-announcer desk that can move and rotate, a raised platform desk for the play-by-play announcers (known as shoutcasters in esports), another raised platform for in-studio roving-reporter interviews, and the main stage for game play.

It was clear that we wanted to bring the high-level broadcast standards and polish of Turner Sports to the esports experience. In other words, we treated this as we would any other sport. This approach helped the traditional broadcast audience connect with and become invested in a game whose on-screen stars are avatars.

The director wanted all-access coverage with the ability to shoot anywhere at anytime: in the arena, behind the scenes, the pressroom, the player practice rooms, player lounges, and the fan zone.

Located outdoors, the fan zone was subject to random RF interference, which required the ability to enable and disable zones on the fly. Additionally, the difficulty and distances of the cable paths required RF-over-fiber conversion or amplification, depending on the zone. The engineering team decided that the best way to facilitate coverage of such a large and diverse area would be installation of a distributed antenna system (DAS), so we used a multizone antenna combiner, which provided visual feedback on signal and noise and allowed the A2s to manage the coverage and limit the RF noise floor.

We originally planned to use wired mics for our studio-show desk. Unfortunately, the immense number of LED power supplies around the arena induced noise in our lines, so we decided to switch to wireless mics in the studio. In choosing the microphones, keeping in mind that the studio-show and play-by-play announcers were less than 20 ft. apart, we had to consider the PA (FOH mix for the in-studio audience), the motorized talent desk, the aesthetic concerns of the client, and product availability due to late change of plan.

Typically, studio-show talent use lavalier microphones. That was not possible in this situation, given the 360-degree set and the PA for the studio audience. We ended up with two types of headset mics.

The studio announcers wore slim headsets; the shoutcasters, traditional broadcast play-by-play headsets. The slight sound difference between the microphones helped distinguish between the different portions of the broadcast.

Additional sound elements to complete the plan included an ENCO system for show-theme and highlight-music playback as well as lines from the four Ross Xpression motion-graphics systems and 10 EVS-server ports.

Our first season featured the popular Counter Strike: Global Offensive (commonly referred to as CS:GO) game. One of my goals was to generate a level of excitement similar to a traditional sports arena. With that in mind, I included four Electro Voice XSUB dual 18-in. subwoofers in the FOH package. This helped the studio audience really feel the explosions and other gameplay sound effects.

However, FOH levels in conjunction with all the open mics created a challenge. We had to find the delicate balance of generating crowd excitement with the FOH mix without negatively affecting the sound of the broadcast.

The FOH mixer and I were in constant communication concerning level adjustments as audience numbers fluctuated, depending on the type of broadcast delivery throughout the eight-hour broadcast day. Sometimes, we were streaming only on Twitch, which required a much smaller audience; sometimes, we were also live on TBS, which filled the entire arena.

Another challenge with FOH levels was keeping the gameplay neutral. We had to ensure that no player gained an advantage from hearing the shoutcasters’ match commentary. To accomplish this, we distributed pink noise to isolating headphones that the players were required to wear over their normal gameplay earbuds.

The broadcast aired on TBS, on Twitch, and around the world by multiple international partners. Some partners’ requests conflicted with those of other partners, and so we set up a number of mixes to meet different requirements.

We also had special mixes and track layouts set up for instant replay and highlight-style playback. Because this was a new venture, things were constantly evolving, and additional requests for special mixes popped up constantly. This included setting up a number of pre-fade mixes to help the tape department record behind-the-scenes interviews and other elements to incorporate into the show while we were live on the air.

Instant Viewer Feedback
One thing inherent in esports that traditional sports are just starting to experience thanks to social media is immediate feedback. As we all know, technical difficulties are a part of any production. In the case of Twitch, difficulties are amplified because you have a direct conduit to the viewer, and vice versa. It’s more like an interactive broadcast with a chat room streaming comments.

For example, during one segment, we had a ground loop in one of the shoutcasters’ mic lines. Twitch viewers repeatedly wrote “bzzzz, bzzz” until the problem was corrected. Fortunately, they also congratulated us on correcting the problem. In another instance, some viewers tired of the theme music and voiced their opinion. Given the anonymity of the internet, some were ruthless with their criticism of parts of the broadcast as well as of the players and studio-audience members.

Although portions of the feedback were certainly in poor taste, the overall interaction definitely added a new level of critique and made me a better mixer. After settling in and getting a show rhythm, I began to play with that audience. For example, in one map, or scene from the game, a chicken pops up. I played a chicken sound effect to generate chat reaction. That started a new challenge of interactive mixing for me.