Navy Pier in Chicago is an important civic landmarks in the United States and a top-visited leisure and cultural destinations in the world. Since its reopening in 1995, the Pier has welcomed more than 180 million guests, including 9.3 million guests in 2016. Set in Chicago, widely recognized as one of the densest RF environments in the U.S., the Pier faced a major hurdle in finding a way to overcome the RF challenges that are common with these types of wireless installations. Already familiar with the spectrum challenges that the project faced, OSA’s Brandon Gardner and his team installed a wireless system from Shure. 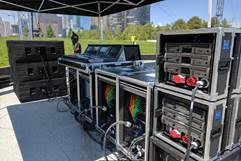 With roughly ten venues on the Pier competing for wireless spectrum space, there was a great deal of coordination needed among the venues, and the team had the ability to create group channel assignments with the ULX-D Digital Wireless system. The Pier was impressed by the capabilities of ULX-D Digital Wireless because the system does not further disrupt the wireless environment already in place.

“Navy Pier brings in millions of people every year, and with the addition of the new Polk Bros Performance Lawns, the Pier was severely in need of an audio system that would not only provide flawless audio, but wouldn’t interfere with the other venues competing for space,” says Gardner. “Since the installation of Shure’s ULX-D and other microphones, the Pier has never sounded better.”

By opting for the ULX-D wireless system, Gardner and his team were provided with flawless audio through extremely efficient RF performance, networked control, reliability, and ease of installation, to name a few benefits. The team at Navy Pier is pleased with the wireless system and other Shure microphones that have been put into place for this new venue, and expects to continue to rely on OSA and Shure for future audio projects.