This year’s AES Show (Oct. 18-21) is back in New York City, the most broadcast-centric of the three cities the expo has historically moved among. That creates the perfect context for AES to join forces with NAB Show New York, formerly Content and Communications World (Oct. 18-19), for the first time. On the two overlapping days, a huge array of broadcast-audio vendors will gather under the massive roof of Manhattan’s Javits Center. The two groups say co-locating the events will create “the most comprehensive and largest media and entertainment event held on the East Coast, with more than 600 exhibitors.” Here’s some of what you’ll see and hear at the show. 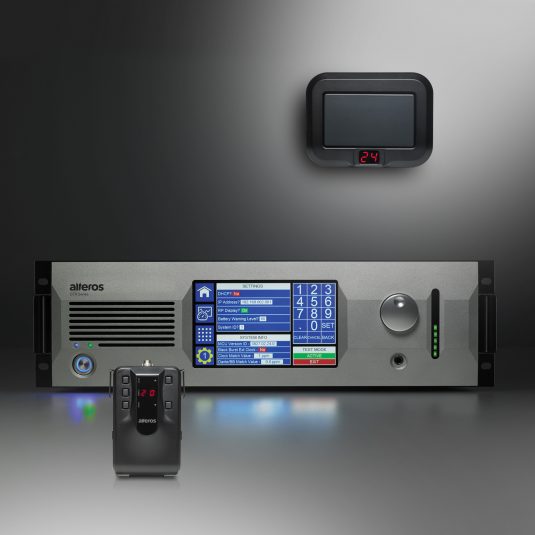 Audio-Technica (Booth 422) is now shipping its new AT5047 cardioid condenser microphone. The most recent addition to A-T’s 50 Series (which also includes the AT5040 vocal microphone and AT5045 instrument mic), the AT5047 is a premier studio microphone that features the same capsule as the AT5040 but with a transformer-coupled output and optimized electronics. It is equally capable capturing instruments and vocals.

Calrec
In addition to demonstrating products in the AES New York exhibition, Calrec (Booth 631) will participate in the Broadcast Audio Expo sessions, which will cover audio applications for radio and TV studios, remote production, and streaming over portable devices. A special AES-hosted insight panel will look into the present and future of AoIP and transport systems.

Clear-Com
Clear-Com (Booth 828) will present the latest enhancements to its HelixNet all-digital networked partyline intercom system. New features include binaural listening in the HelixNet HXII-BP-X5 beltpack, a six-fold increase in I/O ports, and direct connections to the Agent-IC mobile app and VoIP phones. Through the LQ interface, any user on the HelixNet system is now able to communicate with users on Clear-Com’s Agent-IC mobile apps running on smart iOS or Android devices over Wi-Fi, as well as users on VoIP phones via SIP connection.

Genelec
Genelec (Booth 322) will spotlight its Ultimate Point Source monitoring with “The Ones,” In this series, the 8351 three-way Smart Active Monitor is joined by the new 8341 and 8331, the world’s smallest three-way coaxial monitors, to create a complete compact coaxial range for near-field monitoring. Innovations include a motor assembly in which the midrange and the tweeter share the same compact magnet system, reducing size and weight with no reduction in response. The midrange coaxial driver cone is now composed of concentric sections, optimizing midrange linearity. Despite the size of the 8341 and 8331, each unit incorporates three stages of dedicated Class D amplification, developed in-house by Genelec and including eco-friendly Intelligent Signal Sensing (ISS) energy-saving technology.

Lectronics
Lectrosonics (Booth 927) will introduce two transmitters as the latest generation in the digital hybrid wireless SM Series product line: the “wide-band” SMWB (single AA battery) and SMDWB (dual AA battery). They have a similar look and feel to previous SM Series units but offer several new features, including the ability to act either as a transmitter or as a body-worn recorder and wideband tuning. As with current Lectrosonics transmitters, the SMWB and SMDWB units tune across three standard frequency blocks and come in several frequency ranges: A1 (470-537 MHz) and B1 (537-614 MHz) for the North American and export markets, B2 (563-640 MHz) and C1 (614-691 MHz) for certain export markets. RF power for these models is selectable at 100, 50, or 25 mW (North American version) and 50 or 25 mW (certain export markets).

NUGEN Audio
NUGEN Audio (Booth 504I) is showcasing a beta version of its AMB Dolby Module, the latest option for the AMB Audio Management Batch processor modular software. The company will also demonstrate an update for its Halo Upmix. The new 3D Immersive Extension builds on the Halo 9.1 Extension, adding further options beyond the existing Dolby Atmos bed-track capability. Also on display will be the Halo Downmix, a downmixing technology for creating the stereo mixes from original surround-audio sources as well as other software updates for its popular loudness solutions.

Riedel
Riedel’s (NAB Booth N853/AES Booth 953) new Bolero wireless-intercom solution is an expandable, full-roaming, DECT-based intercom system in the license-free 1.9 GHz frequency range and is fully integrated into Riedel’s Artist digital matrix intercom platform. Bolero can be applied three ways: as a wireless beltpack, as a wireless keypanel, and — in an industry first — as a walkie-talkie radio. The system runs over a standards-based AES67 IP network, and its decentralized antennas connect to AES67 switches and then to Artist frames equipped with AES67 client cards to provide a fully integrated, point-to-point intercom ecosystem with seamless-roaming capabilities.

RTW
RTW (Booth 504G) will preview the latest version of its Continuous Loudness Control (CLC) software, which enables users to operate live or batch-mode loudness processing with up to 24 channels. All surround formats defined in the ITU 1770-4 standard are supported. The Institut für Rundfunktechnik (IRT) (Institute for Broadcast Technology) partnered with RTW to further improve its CLC algorithm for even better, faster processing. This updated version of the CLC will be available for customers to download in the coming months.

Sennheiser/Neumann
Sennheiser and Neumann (Booth 724/Demo Room 1E04) will be showcasing microphones and monitors. Highlights from Neumann include the U 87 Rhodium Edition microphone and the KH 80 DSP monitor loudspeaker in a new white version. Sennheiser’s focus will be on its AMBEO 3D audio-recording technologies, presenting the AMBEO VR microphone for producing 3D VR/AR audio and the MKH 800 TWIN recording microphone for loudspeaker-reproduced 3D audio. The company will also host and participate in a series of demonstrations and panels on immersive audio. (Updated 10/16/17)

Solid State Logic
Solid State Logic (Booth 522) will announce the System T – S300, a new compact broadcast console that offers a combination of performance and value for a wide range of broadcast installations and production vehicles. The new S300 is a fixed-layout compact control surface that can be combined with the complete portfolio of SSL’s System T network objects: consoles, remote tiles, touchscreen interfaces, Tempest Processing Engines, remote PC software, and network I/O. It can be specified as part of a larger System T installation or in standalone configurations for smaller broadcast facilities or production vehicles. S300 presents the power and versatility of System T in a streamlined console layout that remains intuitive for operators with a wide range of skill levels. System T is the world’s first dedicated live-to-air broadcast-audio–production system to be entirely IP-based. System T uses AoIP as its core, not simply as an edge connection to the console’s audio infrastructure. (Updated 10/16/17)

Zaxcom
Zaxcom (Booth 933) will spotlight the U.S. debut of its ZMT3-HH handheld microphone. Among its features are wireless and hardwired transmission, internal microSD recording with timecode, a programmable function button, proprietary Zaxcom technology, and battery life up to 14 hours. Another highlight of the show will be the Zaxcom Deva 24, an advanced version of the line of Deva mixer/recorders, offering 24-track recording, 16 analog inputs, 16 AES inputs with AES42, Mix Ahead, NeverClip, ZaxNet, three recording formats, 12 hardware faders, a detachable interface, touchscreen, and many other features.