The Optical Devices Division of FUJIFILM is showcasing several of its newest lenses and accessories at the NAB Show New York this week (October 18-19) at the Javits Convention Center. Being shown for the first time in the U.S. after its introduction in Amsterdam is the world’s smallest and lightest broadcast lens supporting 4K production, the FUJINON UA24x7.8; along with the FUJINON MK Series of cinema lenses and new zoom control servos for the MK lenses from Chrosziel and Heden. 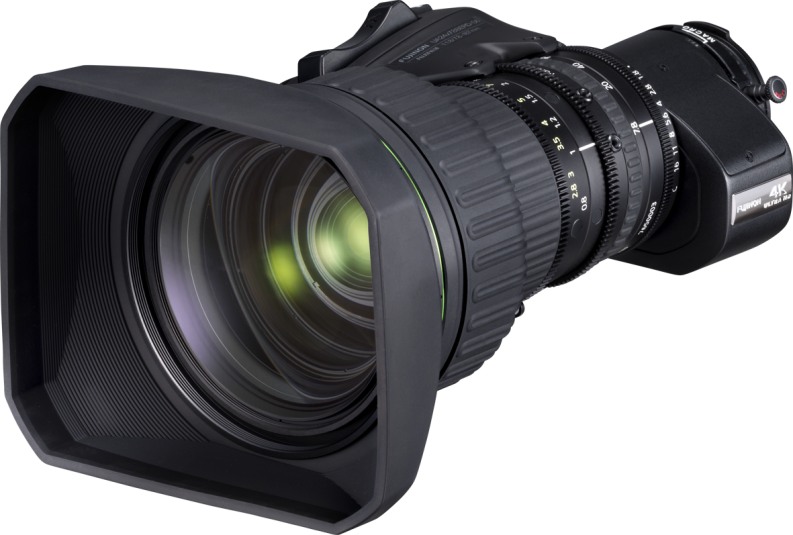 With a total length of 8.6’ (220.5) mm and 4,4 lbs (1.98kg) weight, the UA24x7.8 is the smallest and lightest broadcast lens supporting 4K. Despite its compact body, the lens features a 24x high magnification zoom, covering a focal length from the wide angle of 7.8mm to 187mm. This new portable lens allows users to shoot high-definition, realistic videos in environments requiring significant mobility, such as live sports and news from remote locations.

The new FUJINON UA24x provides advanced optical performance, with 4K compatibility, throughout the entire zoom range. The latest optical simulation technology was used in the lenses’ optical design to prevent resolution degradation around the edges and control aberrations, thus achieving 4K image quality across the zoom range. An aperture shape close to that of a circle is achieved by adopting nine aperture blades, which provides a more natural bokeh.

The UA24x is the latest zoom lens in the company’s Premier UA Series of 4K 2/3” lenses. The UA Series is the first designed specifically for UHD broadcast applications.  The addition of this product expands Fujifilm’s 4K broadcast lens lineup to eight models in total,  catering to the various needs for 4K HDR video production.

The FUJINON MK Series of cinema lenses are designed with the ‘emerging’ cinematographer in mind, whether shooting a live event, online programming, documentary, corporate video, wedding, independent or short film production. “MK” lenses are currently designed for E-mount cameras and boast advanced optical performance, ultra-compact and lightweight design, as well as superb cost performance. With a combined focal length range of 18mm-135mm, together the MK18-55mm and MK50-135mm lenses cover the most frequently used range utilized by emerging cinematographers. The series offers fast lenses with T2.9 speed across the entire zoom range, enabling a shallow depth-of-field.

In addition to their lightweight and compact build, the “MK” lenses are purpose-built for the operator. Only one matte box and one filter size are needed between the lenses. Time-saving features include a macro function that allows for a broader range of close-up shooting, and gears for the three rings are positioned in the exact same place, which eliminates the need to re-position accessories when switching lenses.

Also on hand are new lens servos for the MK Series from Heden and Chrosziel. The Heden FUJINON MK Zoom Servo offers lens control for the Sony FS5 and FS7 camera via the cameras’ Smart Grip. The controller provides motorized control over the zoom and allows the user to operate it via the native zoom rocker on the Smart Grip. The Heden FUJINON MK Zoom Servo Kit consists of a motor bracket, the motor itself and the motor driver.

The Chrosziel CDM-MK-Z Zoom Motor for the MK zooms is being demonstrated within the Fujinon/Fujifilm booth as well. As with the Heden version, all components are included within one piece of housing, and the servo is controlled via the Sony Smart Grip.

Additionally, a panel sponsored by the Society of Camera Operators (SOC) on October 18, “The Role, Art and Craft of the A Camera Operator,” will be moderated by Thomas Fletcher, Director of Sales, FUJIFILM Optical Devices Division. The panel will occur from 4:00-4:45 p.m. in the Forward Focus Keynote Stage during NAB New York.