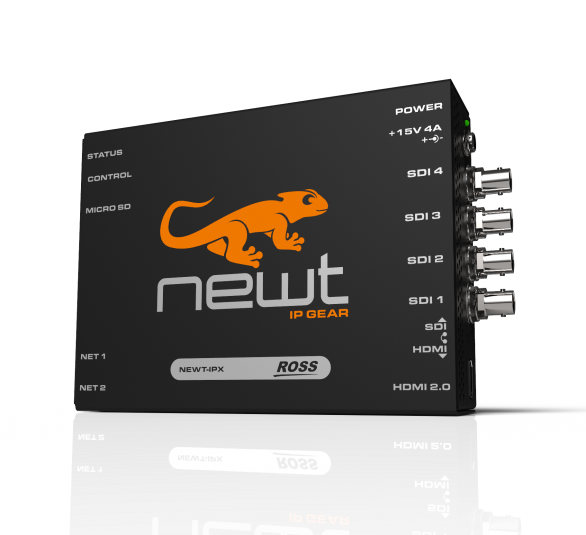 Newt is a UHD-over-IP to SDI/HDMI-2.0 converter. Newt easily adapts to rapidly changing IP environments. This is the first product species that brings to life UHD-over-IP to HDMI-2.0 drop-down conversion. Newt is robust and fluent in open control protocols such as NMOS, EmBER+/RAVENNA, and DashBoard, giving customers the freedom to throw this little guy down into the IP environment of their choice.

With Software Defined Production (SDP), Newt easily adapts to multiple uses and functions as the IP landscape unfolds.  In addition, Newt can go anywhere, thanks to flexible mounting options and studio-quiet operation. Housed in a compact 5” by 6” robust enclosure, Newt is ideal for use in both inside and outside studio environments.

“As the broadcast industry migrates to IP, the need to convert signals into and out of the edges of the IP production network becomes paramount. Even as broadcast and production workflows transition to support native IP interfaces, monitors are still using some form of baseband input, and there is a need to convert baseband cameras to IP,” says Nestor Amaya, Director of IP Solutions and Infrastructure Product Marketing, Ross Video. “Newt addresses this challenge by providing a point-of-use throwdown box that lets users monitor their signal chain using current displays, and to convert SDI outputs from cameras to IP.”