In live sports transmission, life is a balancing act between cost and reliability. So, when it comes to the three chief methods of primary backhaul, where does the industry stand on satellite, fiber, and IP (or use of the public Internet)? 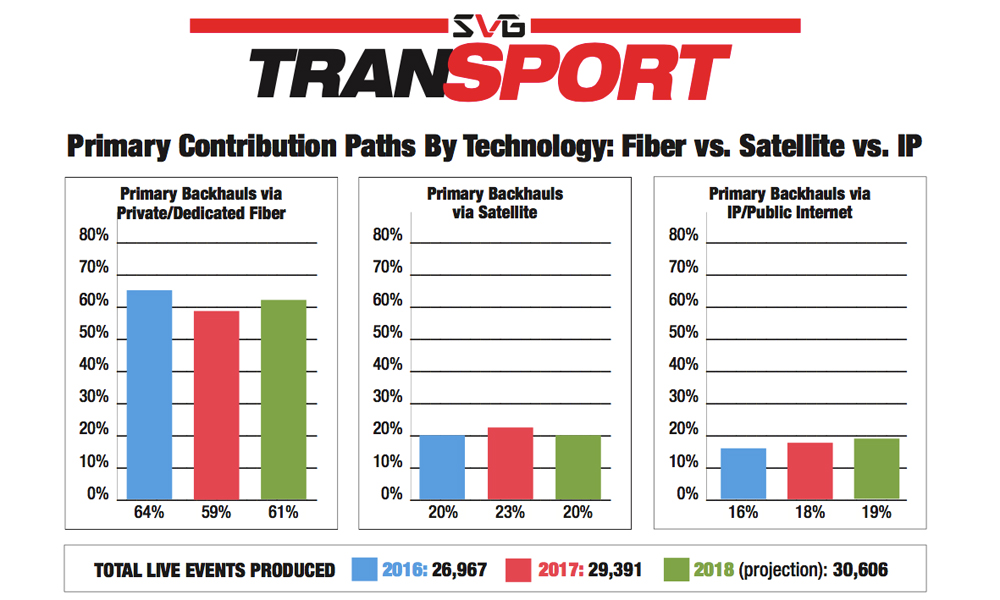 A panel of some of the industry’s top transmission executives tackled that very topic during an opening panel at SVG’s TranSPORT event at the Microsoft Technology Center in New York on Tuesday, which drew a record-crowd of more than 250 sports-video professionals. The decision came down to a few key factors: location of the event being produced, the caliber of the event, and the overall number of events being produced by that network.

Through an annual survey conducted by SVG and its TranSPORT Committee, the numbers revealed that, in 2017, 59% of all live event productions were carried over fiber infrastructures. Although fiber lost about 5% of the market from a similar study done in 2016, it remains far and away the most used form of primary backhaul among the major broadcasters, easily besting the traditional model of satellite and staving off the rapidly advancing use of the public internet, or IP. 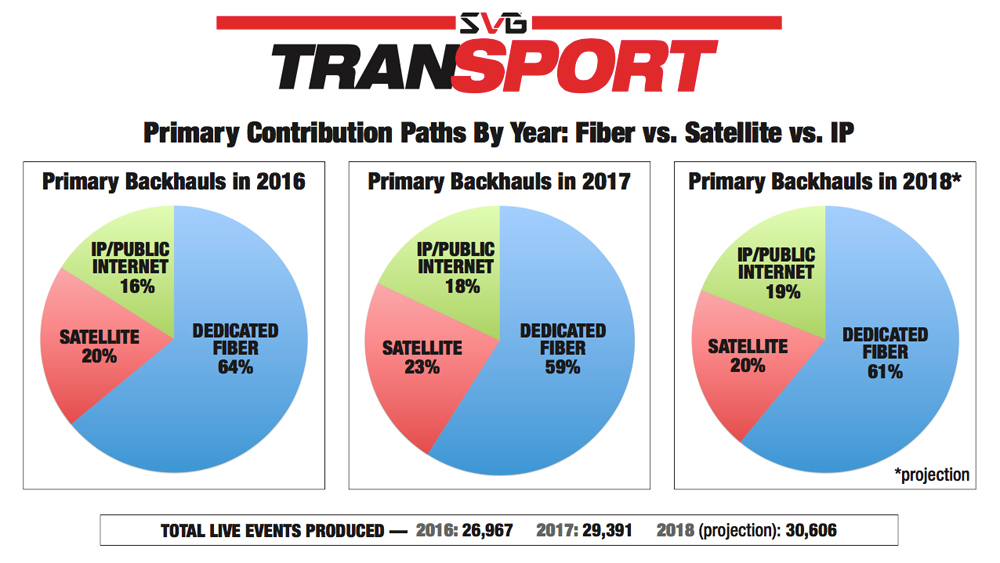 “At some of our largest events, we’ll always have satellite as backup, but we’re moving away from that for primary,” said Chris Connolly, senior director, transmission engineering and operations, NBC Sports Group, “but I think the biggest driver is the need for data and file transfer that is increasing the need for IP.”

Although some in the industry might be ready to count it out, satellite went against the run of play this year, its use rising 3% from the year before.

“A lot of it has to do with the location of the production,” said Keith Goldberg, VP, global operations and transmission services, Fox Networks Group, and Chair of the 2017 TranSPORT Committee. “There are many venues we enter where first-mile access is not prevalent. Satellite still serves a huge function. At the end of the day, though, a terrestrial backhaul is a preference, and location is dictating most of those decisions.”

Said Adam Whitlock, associate director, remote traffic operations, ESPN, “We have a lot of international and digital tiered rights where we continue to exercise those rights and find homes for that programming. Satellite happens to be a pretty efficient way for us to get quite a bit of international programming back to Bristol to redistribute. That’s the reason for the uptick on our end.”

Although fiber and IP are the darlings, many acknowledge that satellite remains the reliable old friend, always there to serve as a sure-fire back up.

“We don’t go all-in just [on fiber and IP],” said David Chilson, director. broadcast distribution operations and engineering, CBS, where he has been for 16 years. “If it’s a Tier 1, Tier 2 event, there will always be a satellite component. Satellite is still the guaranteed go-to space. Our country is a big country, and we all still have fiber cuts, fiber outages, redundancy, and rings. For us, it’s a hybrid. We’re still in the 40%-45%, where we will still have a satellite truck there in the secondary role.”

There’s no denying that satellite has staying power, thanks to its reliability and effectiveness in an increasingly international sports world, but many of the execs on the panel were apt to admit that they did see a much brighter future in IP and expect those annual numbers for satellite to tick down again in 2018.

IP is especially appealing to broadcasters specializing in the long tail of sports content. Sinclair Broadcast Group, for instance, produces thousands of high school and college sports events each year, and bringing a satellite truck to all of those events makes little sense financially.

“There’s only so much of the revenue pie you can draw from,” said Paul Spinelli, director of engineering, Sinclair Broadcasting Group. “We ride the internet for the first mile almost exclusively [on our college events]. Once it gets back to our partner’s data center, we’re co-located into that data center and put some QS around it to ship it around where we need to within our enterprise. We’ve found it to be very cost-effective and really the only way that we could justify putting on what some guys might call Tier 2 or Tier 3 events.”

IP certainly has its place, but it’s still got quite a way to go before it will be trusted by many of the major network broadcasters on their biggest events.

“We’re not at a point yet where we feel comfortable putting our contribution on the public internet yet,” says Goldberg. “It’s not that we don’t think about it or discuss it but with private line being a more secure form of transport as our first choice. Contribution into contribution, maybe, but for primary transport? No.”

According to Chilson, CBS Sports actually started experimenting with IP transport using the public internet years ago, but, when the cell carriers came around with offers for dedicated lines, there was little reason to go back to the public internet.

Plus, when it comes down to it at the end of the day, it’s making sure that signal is reliable.

“Internet is reliable, but, if you were carrying an event when a major catastrophe occurs and the internet slows down to a crawl, you’d be in trouble,” says Chilson. “For Tier 1, Tier 2 events, you’re going to want the insurance and reliability. I think the evolution is in bonded cellular, which is a public infrastructure, and sports organizations have not embraced it as much as the news organizations have, but that’s coming.”