The SDI-based truck is also capable of HDR production

Dome Productions continues its commitment to 4K-native mobile units with the launch of its third. Following in the footsteps of Pioneer and Trillium, Vista is the latest generation and most technologically advanced of Dome’s multiformat trucks capable of producing in 4K UHD.

Vista hit the road in July at BMO Field in Toronto, producing a Major League Soccer match between Toronto FC and New York FC live on TSN. Since then, the 53-ft. expando has done a wide variety of sports events — including CFL, NHL, and horse racing — and entertainment shows. 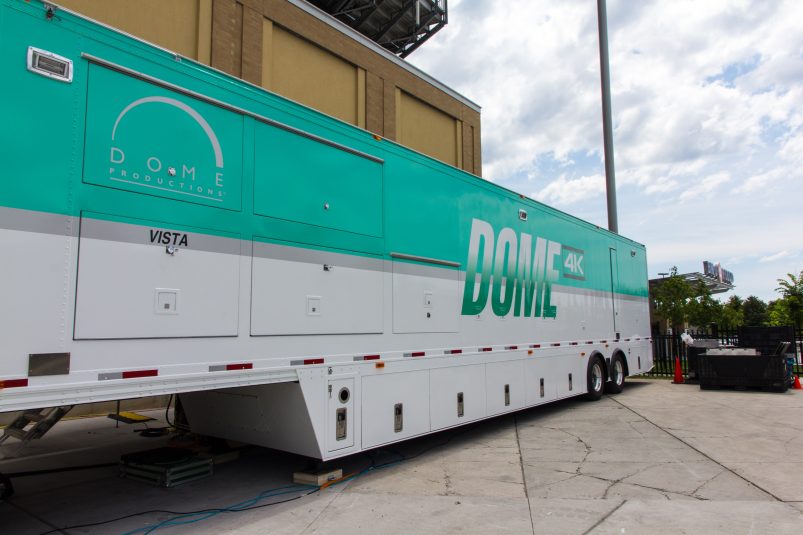 Since debuting in July, Vista has supported a wide variety of sports events and entertainment shows.

“The launch of Vista is another true testament to the qualifications and commitment of Dome’s innovative engineering team,” says SVP/GM Mary Ellen Carlyle, “who have been instrumental in the system design, wiring, and integration of Dome’s expanding fleet including 4K UHD trucks.”

Ever since Dome Productions co-owners Bell Media and Rogers Media announced in early 2016 their intention to deliver NBA and NHL games live in 4K, Dome has targeted the 4K-production market. First, the company reconfigured its existing Trillium production truck to handle 4K while it worked on Pioneer, its first purpose-built 4K truck. Pioneer hit the road in July 2016.

“That was really our first [move into] 4K,” says Director of Engineering Mike Johnson. “We modified a truck previously, but the Pioneer was a purpose-built 4K from the ground up. [With Vista,] we hoped that we might be able to take more advantage of IP serviceability, but we did not do that on Vista, so it stayed as an SDI truck. It’s a large router implementation of SDI, but it gives us that serviceability in 4K that we needed.” 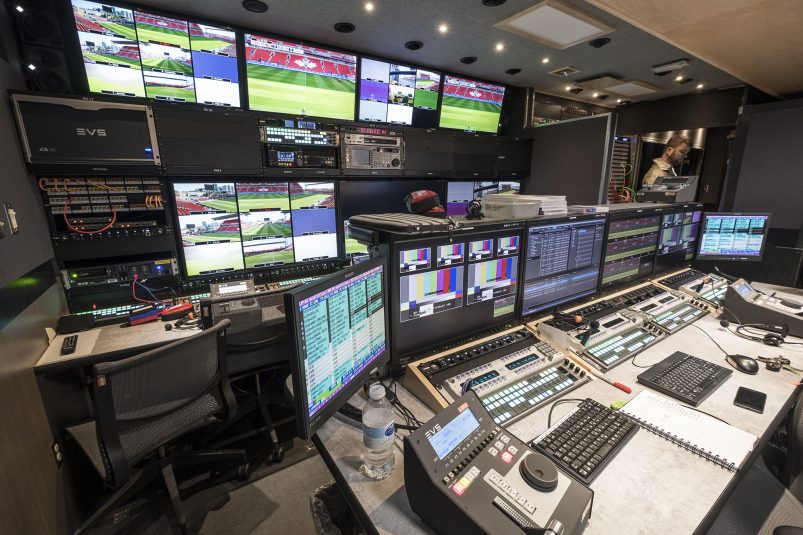 The truck features a ChyronHego Mosaic XL for graphics and, in a first for Dome, a Calrec Apollo digital console for audio. “We made a conscious decision to upgrade the audio board,” says Carlyle, “because we want to play in that even bigger market.”

Depending on whether Vista is producing an HD or a 4K UHD show, the truck is equipped with 10 Sony HDC-4300 cameras — which can be configured for 720p, 1080i, 1080p, or 4K60p — and a variety of Fujinon UHD lenses. According to Dome Productions, Vista is HDR-ready and capable of producing a 4K UHD feed in high dynamic range.

Since 2016, Dome Productions has supported well over 300 sports and entertainment events live in 4K, and Vista will be instrumental in supporting the company’s ever growing workload. For larger-scale shows, Vista easily integrates with any of Dome’s B units on the road today.

“Based on building blocks that are industry-proven,” says Johnson, “Dome is excited for what Vista can deliver in meeting the most feature-rich production requirements for the sports and entertainment industry.”