Schiavo, who was inducted into the Sports Broadcasting Hall of Fame in 2013, spent decades with ABC Sports and YES Network

Joe Schiavo, the longtime technical director at ABC Sports — including 22 years as the TD behind Monday Night Football — and technical manager for YES Network, died over the weekend from complications related to a lung infection. He was 74. 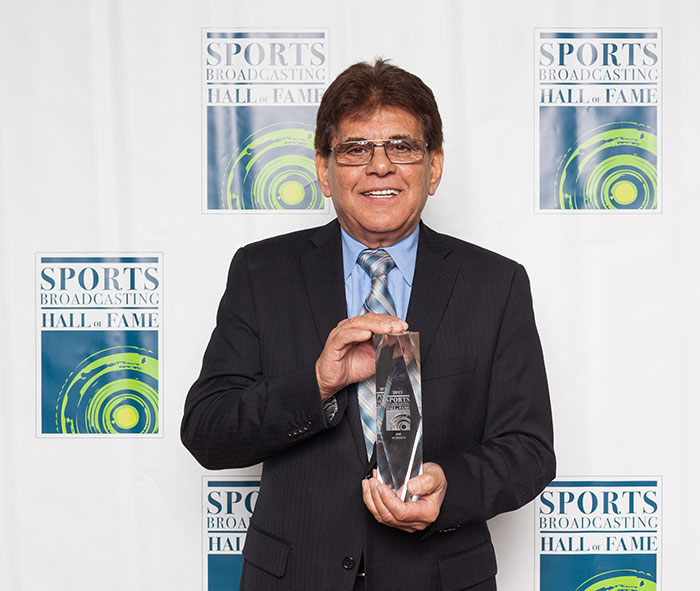 Joe Schiavo was inducted into the Sports Broadcasting Hall of Fame in 2013.

“Joey defined and earned the title of LEGEND,” said John J. Filippelli, president of production and programming, YES Network. “He was seamless under pressure; he handled everything as only Joey could: in his own style but also with kindness, humility, and grace. He will be sorely missed not only by everyone here at YES but by our entire industry. Our thoughts and prayers go out to his wife, Kelly, and to the entire Schiavo family.”

With his mile-a-minute Brooklyn accent and manner of treating everyone he met like a lifelong friend, Schiavo was a universally beloved figure in the industry. And friends of Schiavo — or Joey, as everyone seemed to call him — like to tell the same story about the journeyman technical director.

He was working at YES Network at the time, producing Mike Francesa’s radio show on location at a golf tournament in Westchester, NY. One of the guests slated for that day’s show was Frank Gifford, the former voice of Monday Night Football on ABC.

On seeing Schiavo, Gifford reportedly leaned over to Francesa. “Do you know who that is?” he exclaimed. “That’s Joey Schiavo! He’s a legend at ABC Sports. A legend!”

Of course, those who know Schiavo best know that he would never tell such a story about himself or tout his own “legend.” For all his accomplishments as technical director at ABC Sports and continued successes as senior technical manager at YES Network, Schiavo was always the kid from Sheepshead Bay, the youngest of four brothers, and the class clown, who grew up playing CYO baseball and dreamed of one day working in television.

After three years of night classes at the RCA Institute in New York, Schiavo was hired by ABC in 1968. Despite his lifelong love for the Brooklyn Dodgers and then the New York Mets, he didn’t actively pursue a career in sports. The kid who used to play with 8mm cameras would be a camera operator for Eyewitness News and later find his way into sports.

“When I went to work in television, I wasn’t thinking about sports. I was just thinking about getting into TV,” said Schiavo, speaking with SVG in 2013. “The first thing I did was Eyewitness News, which everyone did. … [ABC] sized you up, and, if you’re a city kid, they sent you out into the field because they figured you could work in rain or snow and it wouldn’t bother you. I think that was their logic in the beginning, so, when they found out about me, they sent me out into the field, and that’s how I got into sports.”

Schiavo, like all new ABC hires at the time, joined the company as a vacation-relief employee and did not expect to become a permanent employee right away. However, he had a leg up on the competition: a commercial driver’s license.

“I drove a school bus when I was a kid, and they knew that, [so] they sent me out to drive one of the TV mobile units,” he explained. “The money was good with the overtime, and [the bosses] said, Well, if you’re willing to drive, you have a job here. I said I’ll do whatever you want. And that’s how I got the job.”

In 1979, following a successful stint as camera operator, Schiavo was asked to be a technical director. “Actually, they didn’t ask me,” he laughed. “They told me.” “[ABC Sports director] Chet Forte put me on Monday Night Football,” said Schiavo. “I was one of Chet’s camera people on Monday Night Football. … They told me I was only going to do four or five games because the TD that was doing Monday Night Football was also doing baseball and it was a World Series year, so they needed someone to cover him. … After the fifth game, Chet walks in the truck and goes, ‘Oh, by the way, the other guy is never coming back.’ I was in a state of shock.”

Ken Aagaard, EVP, innovation and new technology, CBS Sports, recalls seeing Schiavo’s name on the opening credits for Monday Night Football: “I saw it for so many years, and I couldn’t wait to meet him. That show was always so well done, on the leading edge, and we all knew Joe was a big part of the show’s success. I was very proud to see him be inducted into the Sports Broadcasting Hall of Fame.”

“Joey had the hand-eye coordination, the dexterity, and the ability to listen and translate that was absolutely flawless,” Jack Kestenbaum, a close friend who worked alongside Schiavo at ABC and YES Network, said in 2013. “He was the best. He never made a mistake. As a technical director, he never made a mistake.”

Speaking of Schiavo’s passing, Kestenbaum said, “He was 74 years young and, up until this lung infection, was always so filled with life. He would walk into a room or a TV compound, and his personality was like a magnet. EVERYONE within earshot immediately got pulled in. Years could go by, and, right until the end, he could step into nearly any mobile unit in the country, and the response from the EIC would always be the same: ‘JOEY!!! How are you? Where have you been? What do you need, pal? Anything I can do to help, just let me know.’”

Said Geoff Mason, who worked with Schiavo at ABC Sports, “Joey was born with the qualities that every aspiring technical director longs to have: patience, passion, and an incredible sense of professionalism. He had all of those qualities in abundance. Plus he loved sport and people.”

“Joey is a legend at ABC Sports,” Ed Delaney, who worked with him at ABC Sports and YES Network, said in 2013. “Just a delightful guy to be around, brilliant at what he does, and a true leader. Back then, in the network days, the technical directors really were the crew leaders, and Joey was such an exceptional leader. … Joey got everything done and was beloved by everybody.”

Continuing a Hall of Fame Career
When Schiavo decided to leave ABS Sports in 2002, his time in sports television was hardly finished. He joined YES Network as technical manager, finally getting the opportunity to cover his favorite sport. He traveled for all New York Yankees road telecasts, including spring training in Florida, and cheered for the team — except when they played the Mets.

In 2013, Schiavo was inducted into the Sports Broadcasting Hall of Fame and reflected on his decades in the sports-broadcasting industry.

“I was lucky enough to work at ABC in the fantastic era, and I’ll be forever grateful,” said Schiavo. “And then to have the opportunity to work at YES [Network]. Well, somebody up there likes me to give me these positions in life.”