John Skipper, president, ESPN/co-chairman, Disney Media Networks, will take part in a closing keynote conversation at the 2017 SVG Summit on Dec. 11-12 in New York City. The Q&A session, which will take place on Dec. 12 at 3:45 p.m. at the New York Midtown Hilton, will conclude a packed two days of informational sessions, technology exhibits, and networking at the annual SVG Summit.

“It’s great to once again have a chance to discuss industry trends, our HOF inductees, and ESPN’s plans for 2018 and beyond with John Skipper,” says Ken Kerschbaumer, co-executive director, editorial services, SVG. “ESPN and Disney Media Networks have big plans for the future, and his observations on the thinking behind those plans, ESPN’s evolving programming strategy, BAMTECH, and more promise a lively and informative session.” 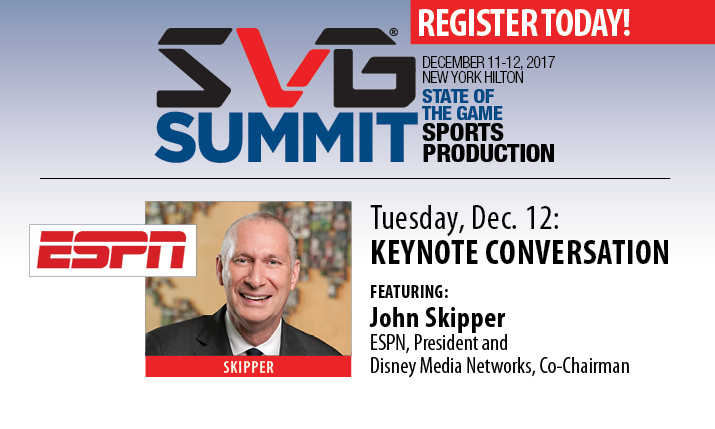 Since taking the helm on Jan. 1, 2012, Skipper has secured ESPN’s global leadership position in the competitive sports-media landscape into the next decade through groundbreaking multiplatform-rights agreements and embracing new technologies to serve fans wherever they are. Today, ESPN enjoys unparalleled television and digital scale in sports media.

Throughout, Skipper has continued to foster what he calls “our best strategic advantage: the people and culture of ESPN.” He has led ESPN to a series of long-term, multiplatform agreements with major rightsholders — all through at least 2021. He signed aggressive long-term affiliate agreements with cable and satellite providers and newcomers like Sling TV, PlayStation Vue, DIRECTV NOW, and Hulu. He has also expanded ESPN’s footprint outside the U.S. with Sony in India, Tencent in China, and Kwesé in Africa.

A 20-year agreement with the SEC covered creation and operation of the ESPN SEC Network and digital platforms and extended the existing media-rights agreement through 2034.

In 2016, ESPN and the ACC signed a 20-year agreement to launch the ACC Network across linear and digital platforms. ESPN’s rights agreement with the conference was extended until 2036.

Skipper holds bachelor’s and master’s degrees in English literature from the University of North Carolina and Columbia University, respectively. He joined ESPN in 1997 and served as EVP, content, prior to being named president.

CLICK HERE for more information on The SVG Summit, including the full program, hotel/location details, and sponsorship information. CLICK HERE to register now.