Turner Sports and Intel have agreed to a multiyear deal to make live NBA game action available in virtual reality via Intel True VR technology. Intel will become the exclusive provider of virtual reality for NBA on TNT and deliver live content for marquee matchups beginning with NBA All-Star 2018 in Los Angeles. Additionally, Intel is partnering with the NBA to become an authorized provider of virtual reality and 360-degree volumetric video with Intel freeD technology to official NBA broadcast partners globally.

Every virtual-reality game experience will be available to authenticated cable/satellite subscribers through the forthcoming NBA on TNT VR app on Samsung GearVR and Google Daydream headsets for download via the Oculus and Google Play stores. Intel True VR technology will enable viewers of NBA on TNT games to choose multiple camera angles during the VR experience. Intel can also integrate 360-degree volumetric video into the virtual-reality experience using Intel freeD technology.

NBA, Turner Sports Continue To Blaze VR Trail
Turner Sports and the NBA are no strangers to virtual reality, each having played a role in several VR productions and initiatives over the past 18 months.

For the second straight year, the NBA is working with NextVR to produce live virtual-reality game broadcasts throughout this season. The league is delivering a 27-game VR schedule that includes each of the NBA’s 30 teams that will be distributed within NextVR’s signature immersive 3D VR experience. Last season, NBA Digital teamed up with NextVR to live-stream at least one NBA LEAGUE PASS game per week in VR, as well as provide VOD content. 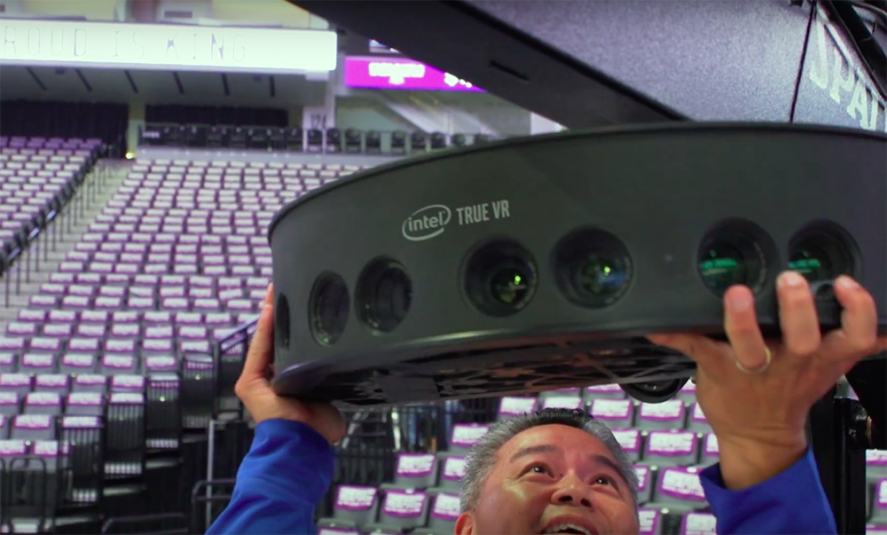 Intel True VR camera rigs will be used to produce live coverage throughout this season.

“This is an exciting time to be a basketball fan, and we are thrilled to be working with Intel and Turner Sports to make virtual reality and 360-degree content from the NBA on TNT games available,” says Jeff Marsilio, VP, global media distribution, NBA. “We are committed to bringing the most innovative and immersive experiences possible for our fans.”

Turner has helped produce VR experiences for two years at the NCAA Final Four in conjunction with Intel True VR (in 2015 it worked with VOKE, which was purchased by Intel later that year). It also played a major role in the first VR live-stream by U.S. major sports league, when it helped to live-stream the Golden State Warriors’ NBA Championship ring ceremony in VR prior to tipoff in 2015.

“Turner Sports and Turner Ignite Sports have been at the forefront of delivering thrilling new experiences to fans. This unprecedented partnership, with Turner Sports as the first NBA broadcast partner to offer the latest Intel VR technology, does just that,” says Will Funk, executive vice president of property marketing and corporate partnerships for Turner Sports. “We look forward to bringing this partnership to life through our broadcasts, as well as telling the story behind the power of Intel’s True VR technology in other unique, unexpected ways.”

This also marks the latest chapter for Intel True VR. In addition to its work on the Final Four, Intel has also delivered live VR experiences in partnership with Major League Baseball (one game per week last season), the PGA Tour (last year’s Players Championship plus a six tournament deal in 2017-2018), NESN (four Red Sox games), and several others. In addition, it will help to deliver VR content during the 2018 Winter Games in February in South Korea as part of its Olympic Partner sponsorship deal.

Intel freeD on the Rise for NBA Broadcast Partners

Working with the Intel, the NBA will also make 360-degree volumetric video available to global league broadcast partners, which collectively deliver games in 215 countries. In the future, Intel plans to integrate Intel freeD technology into the virtual reality experience to enable fans to freeze a moment of game action and view it from the player’s point of view as if they were on the court. The technology can also be incorporated into game broadcasts allowing commentators to pause key moments in the game and view the action in 3D from any angle.

freeD technology is already installed in 11 NFL stadiums (and was utilized during Super Bowl LIand Super Bowl 50) and has been utilized at events ranging from the US Open to the NCAA Final Four to the MLB All-Star Game.

“Intel is working with leagues and sports organizations all over the world to develop and deliver the most cutting-edge immersive media experiences that will make sports more engaging for the next generation of fans,” says James Carwana, vice president and general manager of Intel Sports. “This unique partnership with the NBA will enable us to work with official league broadcasters, including Turner Sports, to take their broadcasts to an unprecedented level and create new ways to immerse viewers in the game.”