After the successful implementation of six NanoLumens LED displays as part of the renovation of its U.S. Assure Club in 2016, the Jacksonville Jaguars recently added to EverBank Field’s digital infrastructure with the installation of a three-sided NanoLumens ENGAGE Series display as part of renovations to the Lycamobile South End Market located in the field level of the south end zone. According to Arch Nelson, NanoLumens Southeast Regional Sales Director, this installation is the natural evolution of a partnership between a visionary sports franchise and a leading technology manufacturer. 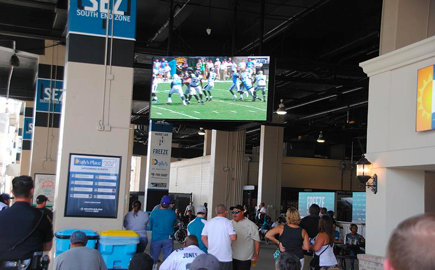 “The Jacksonville Jaguars are one of a growing number of valued repeat customers,” says Nelson. “This has been a great partnership between our two teams. When the Jaguars have a vision for fan experience in different areas of the stadium, they put their trust in NanoLumens’ design and manufacturing expertise to pull it off. The Jaguars are one of the most advanced and sophisticated technology customers that we serve, and we will continue to help them realize their technological vision as it progresses.”

The three-sided display is comprised of three separate NanoLumens ENGAGE Series displays, each measuring 11” by 6.3” and utilizing a 2.5 mm pixel pitch that provides bright, crystal clear viewing from any distance and any angle. The setup hangs from the ceiling in the south end zone concession area, providing pre-game coverage and live footage from the field in every direction. This is part of the location’s ongoing improvements to guest services, according to Nik Sobic, Director of Strategic Initiatives for the Jacksonville Jaguars.

Because it is essentially an outdoor display in an area of the country that is subject to hurricanes, it was determined that it needed to be built and installed to withstand 140 mph winds and receive a protective coating to shield it from the elements. “The new display met all our needs for performance and rugged reliability in an open area environment,” says Sobic. “We are thrilled to have NanoLumens on our team!”