X-ONE, the unified live production system from EVS, has been awarded IABM’s Peter Wayne Award for Design and Innovation, the system’s third win of the year. The award was presented to CEO Muriel De Lathouwer during a ceremony at the IABM Annual International Business Conference and Awards in London. X-ONE also picked up TVBEurope’s Best of Show award at IBC2017. 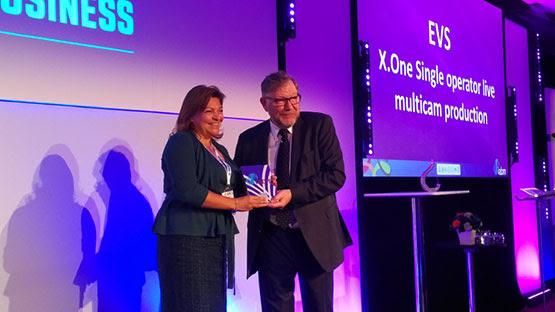 The all-in-one system delivers the signature speed and reliability of EVS’ technology with its new software-defined architecture. X-ONE puts the capabilities of an entire control room in the hands of a single operator who controls everything from EVS’ contextualized touchscreen user interface. This adapts to the type of production its deployed on, placing the user in a unique production environment with pre-defined functions.

Ideal for smaller scale productions of up to six cameras, X-ONE lets operators create replays, control audio, cut together a live feed with the built-in video switcher and even add graphics to live programming.

The IABM Peter Wayne Award – named after the former deputy chairman of the association – is judged by a panel of renowned industry specialists. The shortlist for the award is made up of the various winners of the IABM 2017 award program, including the Game Changer Awards and Design and Innovation Awards. At IBC2017, EVS’ X-ONE received the IABM Design and Innovation award in the Acquisition and Production category.

“Our whole team is incredibly proud to be the recipients of the IABM Peter Wayne award for X-ONE, which cements a very successful product launch,” says EVS CEO Muriel De Lathouwer. “The system addresses a real need in the industry for smaller scale live productions to benefit from industry-leading technology. It provides them with production tools that meet specific resource requirements whilst outputting the highest quality programming.”