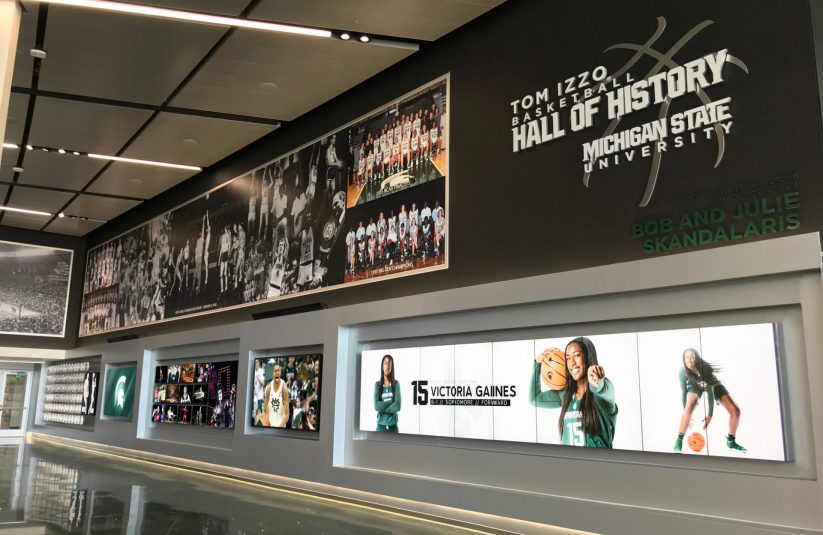 AJP worked closely with MSU to define the vision, determine a high-profile inventory of digital assets, and to apply a comprehensive audio visual system design. In addition to design and development, AJP provided procurement and construction oversight services for yet another exceptional technology project with the university.

As part of a larger $20 million addition to the Breslin Student Events Center, the Tom Izzo Basketball Hall of History is a 26,000 square foot space that blends customized, state-of-the-art programmable display technology with historical tributes designed celebrate Spartan accomplishments and to enhance recruitment efforts. The space has the flexibility to also be programmed for the more than 200 yearly events hosted by the Breslin Center for the greater Lansing area, ranging from major concerts to commencement ceremonies.

“Unbelievable,” says Tom Izzo of the space, noting that it is the technology that makes the Hall of History unique. “It is special.” Head Coach for Michigan State’s Spartans men’s basketball team since 1995 and a Naismith Basketball Hall of Fame inductee, Izzo is the force behind one the most successful basketball programs in the history of college sports. AJP’s design challenge was to come up with unique and technologically cutting-edge experience that honored not only the extraordinary coach, but a long history of MSU basketball players, coaches, fans and moments.

As Owner’s Representative and AV Consultant, AJP has supported Michigan State University on multiple technology projects, including the design, procurement and construction oversight of LED scoreboards and auxiliary displays for Spartan Stadium, Breslin Center, Munn Arena, and the new football Hall of Champions.

LSU’s new center hung is the largest in college sports and ranks 11th in size among NBA arenas. Featuring the latest in HD technology, the true 16:9 aspect videoboard features two sideline displays each measuring 42 feet by 21 feet. The two end zone displays each measure 24 feet by 20.5 feet. In all, the scoreboard gives fans a total of 2,748 square feet of HD video space. Additional LED assets include four new auxiliary displays (each 18.9 feet by 2.4 feet) and an LED scorer’s table to relay game-in-progress information, stats and other dynamic content.

AJP has worked with TAF and LSU on Video Replay AV in the past, and was called back for the latest SEC Network requirement upgrades. AJP designed and engineered a state-of-the-art 5x control room broadcast facility consisting of two large “linear” production control rooms (and associated audio suites) for producing live-to-air SEC events, as well as three “digital” control rooms geared to the school’s video replay board shows. The upgrades centered around a technical operation center with a 750 x 1280 router for distributing signals. AJP also worked on the design and integration of a shading/engineering room to facilitate the shading of more than 16 broadcast cameras, along with the incoming truck feeds and overall engineering duties of the house plant.

AJP is currently engaged with TAF in LSU’s $4 million IPTV system upgrade that will be phased over the next year. The project involves the integration of 1,017 high definition displays at the Maravich Center, Alex Box Stadium, and Tiger Stadium. Installed at concession stands, concourse areas, premium seating areas, and back of house, the HD displays will allow LSU to feed custom content and event footage throughout the three venues. The system will be run from the central control room located in the LSU Athletic Administration Building. The Samsung/VITEC solution integrated by Panasonic/ProMedia will allow LSU Athletics to expand to other campus facilities as desired for years to come.

With fall exhibition games around the corner, the University needed a quick turnaround with minimum disruption to the school. AJP’s comprehensive design and detailed financials enabled LSU and TAF to make legitimate and strategic budget determinations and design decisions in advance of the procurement process. As a result, the University knew precisely what the project would look like and cost before it went out to bid. As the Owner’s Representative, AJP stayed engaged through the construction, installation, and finally the commissioning to ensure TAF and LSU were more than satisfied with their new assets.