Tonight’s CFP National Championship Game on ESPN will feature the biggest production ever for a bowl game, thanks to the use of 125 cameras (between game, studio, and MegaCast coverage) and a game production coming out of nine Game Creek Video remote-production units. And viewers should expect some improvements in coverage, thanks to camera and audio developments that will bring the viewer closer to the action than ever. 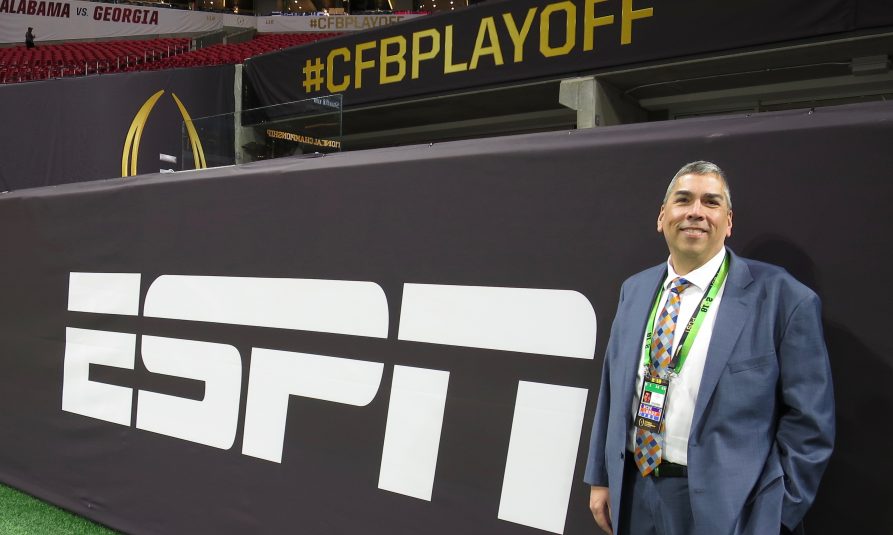 ESPN’s John LaChance says he is proud of the collective effort put in for the 2017 college football season.

“The personal highlight is seeing it all come together,” says John LaChance, director, remote production operations, ESPN, of a massive effort that caps off the 2017 college-football season. “To see the new angles, perspectives, and gadgets we are introducing and watch those get integrated from paper to plan to [execution] gives a great sense of pride. And it’s a partnership between those technicians, vendors, and production personnel.”

A new element this year will be a small RF camera that 3G Wireless installed into each of the four 1st-and-10 markers on each side of the field. It was tested at the Celebration Bowl and the Sugar Bowl.

“The cameras are on the top side of the 1st-and-10 markers and will offer viewers angles they have not seen in the past,” LaChance explains. “It’s a perspective right from the sideline, and they can see whether a player made the first down.”

Also new will be the use of two hat cams, cameras mounted in the caps of two of the folks who move the first-and-10 markers up and down the field. LaChance says the systems this year will not require bodypacks to be worn, making them lighter and less obtrusive for officials who are on the move.

The eight pylon cams are also getting a lift this year, with a microphone placed in each of the pylons at the corners of the end zones. The pylon cams will offer a total of 28 angles of video coverage.

“We have a next-generation pylon cam with embedded audio for the first time,” notes LaChance. “It will be a great element for the fans watching at home. They will not only be able to see great shots from the pylon cam but also hear them.”

The specialty cameras will complement the use of 51 other cameras for game coverage, primarily a mix of Sony HDC-4300, HDC-2500, and HDC-4800 cameras coupled with Canon lenses, including two 95x super telephoto lenses. Nine 4300 cameras will operate in super-slow-motion mode; five 4800’s, in 4K mode (four on the goal line and one hard camera on the main-camera level). Five 2500 cameras will be dedicated to the MegaCast production. In addition, there will be two SkyCam units, one operating as a super-slo-mo and both available to viewers via dedicated channels on the MegaCast. 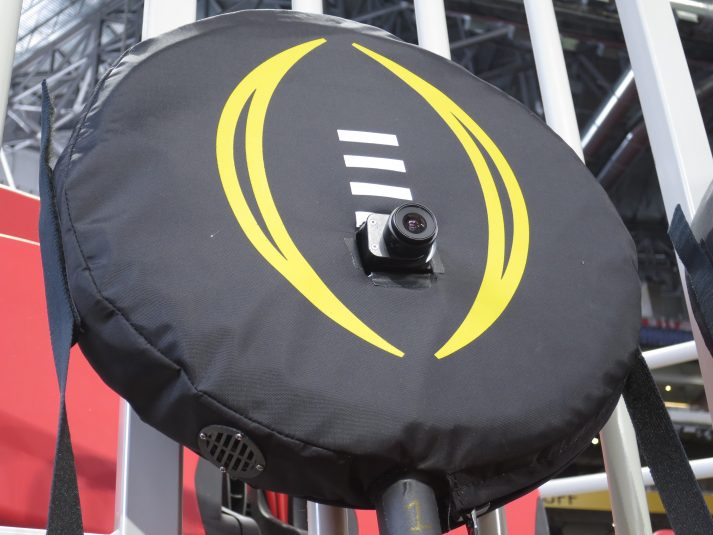 “The second SkyCam gives analysts and folks at home an angle they have not seen often, especially when it is behind the defense and showing all 22 players on the field,” says LaChance. “It’s still early in the process, but, when the directors and technicians get more reps, I think you will see [the use of dual SkyCam] evolve into more coverage options.”

ESPN will also use four prototype robotic microphone systems from DynaMount that will allow the submixer in the Game Creek Maverick truck to remotely rotate a microphone. DynaMount’s original system was designed for music-recording studios, but the company, in consultation with ESPN, built a water-proof housing and enabled a small camera to be mounted to the unit. That small camera gives the operator the ability to see where the mic is pointed and adjust its position manually. Presets are also available so that multiple mics at once can be quickly repositioned.

For tonight’s game, the four units are located in the broadcast booth and face out toward the field. If all goes well, for future events, the systems could migrate out of the booth to other microphone positions around the stadium, allowing microphones to be repurposed for multiple uses more easily. For example, an operator located anywhere in the world but controlling the system via IP could rotate a microphone covering a band in the stands so that it covers the field.

The nine Game Creek mobile production units and support vehicles onsite comprise Peacock A and B at the core of the game production, Nitro A and B handling GameDay and SportsCenter needs, Maverick overseeing the MegaCast, Webby on hand for the SEC Network, and Edit 2 and 3 supporting the game and MegaCast. BSI is onsite for RF needs (13 cameras), and PSSI is providing satellite uplink facilities.

“Peacock A and B and Nitro A and B probably give us the most robust combined fire power for an event like this,” says LaChance. “Part of our decision was to build resources that best match the needs of the game, MegaCast, and the studio shows. Nitro A and B have dual control rooms so both GameDay and SportsCenter can be on simultaneously and be more efficient as we don’t need a separate truck for each.” 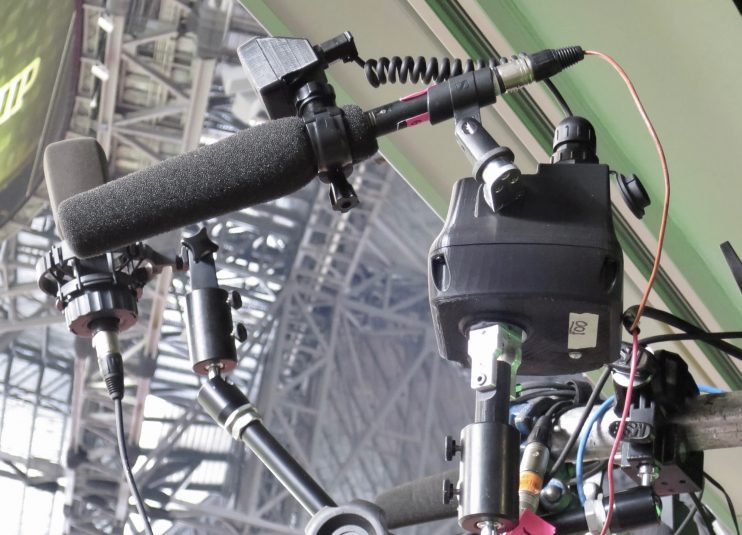 Prototype robotic mic mounts from DynaMount will give new flexibility to microphone positioning.

He is proud of the work done by everyone involved in getting the production facilities up and running in five days. Planning required two plans for the truck compound to be crafted: until two weeks ago, there was the possibility of the Atlanta Falcons’ hosting a playoff game the same weekend as the championship game. Tonight’s production dodged that bullet and was able to follow the original plans put in place months ago.

“This is one of the more challenging compounds that one could encounter,” notes LaChance of a site that is located inside the stadium and features numerous concrete columns that impact facility layout. “Getting all nine mobile units and support trucks inside and powered was a challenge, but we have a great set of vendors to help pull that together.”

The key, he says, is documentation and communication as well as a clearly defined game plan for everyone. In many ways, it is similar to the steps the two teams competing tonight, the University of Alabama and the University of Georgia, will bring to the event. And it’s safe to say that all involved in the production will experience a similar level of excitement and anxiety that all goes well.

“I think we had a great season for ESPN and the games that aired on ABC,” says LaChance. “We had some great finishes, and to be around college football when you are a college-football fan makes the season fly by. But it was a great season, and that is testament to some great technicians, staff, personnel, vendors who made it come together and great for the folks at home.”