When facing one of the biggest challenges of your career, it’s good to have friends in the right places.

At the College Football Playoff National Championship Game, Van Wagner Sports and Entertainment (VWSE) annually steps in to produce the in-venue videoboard show. That calls for a collaborative effort between VWSE and the home stadium’s video-production team. So, when VWSE was faced with working on the canvas of Mercedes-Benz Stadium’s iconic 360-degree Halo videoboard, it helped that VWSE EVP Bob Becker had a long-standing relationship with the man who calls this stadium home, Pete Soto. 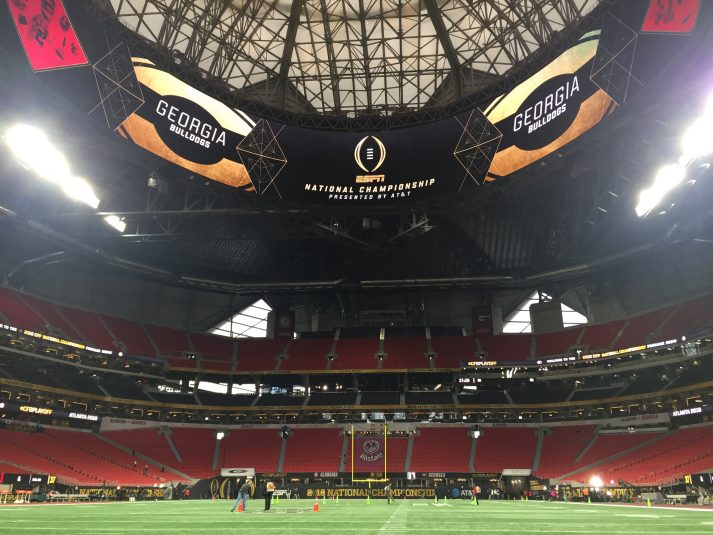 The pair were college roommates and actually worked together in helping launch the first videoboard shows for new franchises Florida Marlins and Carolina Hurricanes.

“We have the same cadence when we speak with our staffs; it makes me laugh,” says Soto, who is senior director, game presentation, live events, and stadium production, AMB Sports & Entertainment Group, which oversees the stadium and supports the Atlanta Falcons and new MLS club Atlanta United. “There’s definitely a comfort level, and it’s great to be back in the co-pilot’s seat with a guy that I’ve eaten a lot of dirt with.”

Mercedes-Benz Stadium steps back into the national spotlight again tonight when Alabama battles Georgia for the College Football Playoff National Championship, and Becker and Soto will find it hard to keep their eyes off the two spectacular videoboard structures that are groundbreaking in their own right. 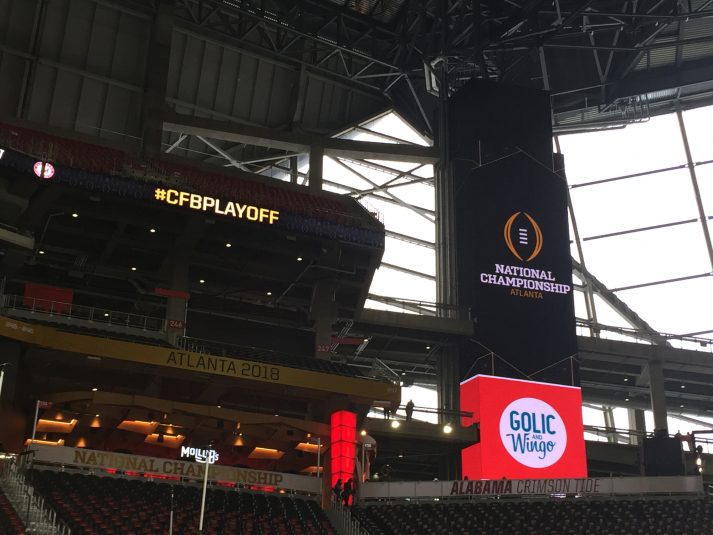 A vertical board called the Mega Column behind the west end zone at Mercedes-Benz Stadium provides 6,700 sq. ft. of videoboard space, is 101 ft. tall, and is used to display everything from stats to social-media integration and player cards.

As sparkling and beautiful as the Halo board is, it’s no surprise to anyone who works in this business that it has been a significant challenge for Soto and his team to not only figure out how to program it but to make it work technologically, period. The complexity of the structure led to a stretch in July, August, and September when AMB Sports & Entertainment Group staff plugged away for 77 straight days.

“We need to start designing control rooms like firehouses with bunks and kitchens,” laughs Becker. “I’m not equating what we do, but we certainly are working around the clock.”

So is it worth it to work on these one-of-a-kind boards? Soto sure thinks so.

“It’s been a challenge, but it’s been a really fun challenge. It’s trying, and it was a very aggressive season, but we’ve had a lot of great things happen in this building. This is the crown jewel of the season.”

Soto and his team have been very creative is using this new canvas over these past few months. They ultimately settled on splitting the videoboard into four quadrants: over each end zone and over each sideline. For live game coverage, the board is split in half and does a “flip-side” show so that the ball is always going in the direction of the field from which the fan is viewing it. It also offers the opportunity to try things an in-venue video team had never done before. 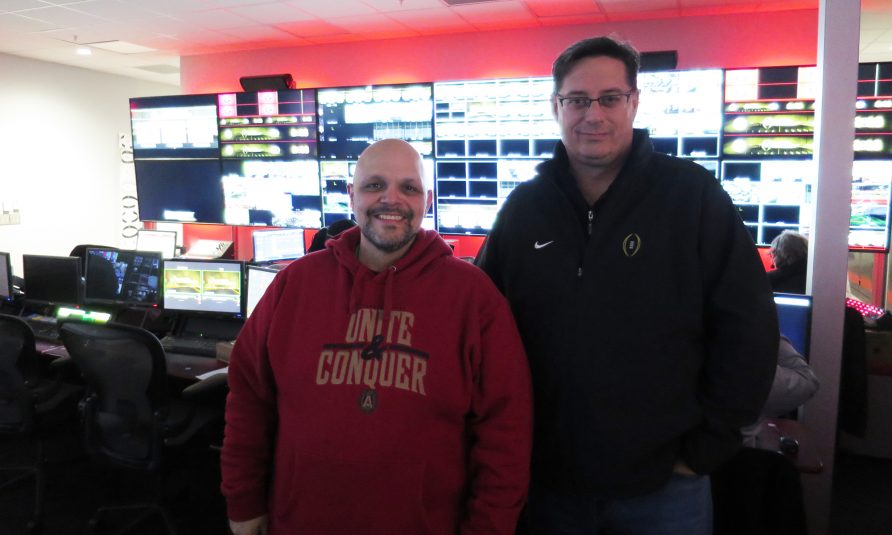 “It’s the largest surface in the world,” Soto explains. “It gives you a huge canvas to work with and do whatever you want. Anyone who comes in and works here I tell that their imagination is their limitation because we can make something happen. It also gives us a unique immersive experience with fans. It’s an experience that’s like a Disney attraction. You are almost on a ride.”

To technologically pull off programming the Halo board, AMB Sports & Entertainment Group turned to at Ross Video, which came up with its high-powered Tessera system. This one-of-a-kind engine enables AMB to link multiple XPression graphics engines to create a scalable matrix of channels to stitch together the images across the 360-degree canvas.

The rest of the control room is built around a pair of Ross Acuity switchers and Evertz DreamCatchers (for replay), Evertz supports the routing beneath it all, and the cameras on the field are Grass Valley units outfitted with Canon lenses.

Soto acknowledges that designing the control room early in 2017 was difficult given the current state of the industry, but he feels that AMB has set itself up for success.

“We hit the perfect storm when designing this control room,” says Soto. “We were facing IP broadcasting with AIMS vs. ASPEN and having to make the right decision there. There was 4K on the horizon. So we tried to be as forward-thinking as possible.”