NBC Sports Philadelphia and NBC Sports Boston are taking advantage of NBC’s NEWBERT remote-controlled flypack for tonight’s NBA game in London, a move that allows the production teams for both networks to produce the show from NBC Sports’ Stamford, CT, facility with only the on-air talent onsite in London.

“It’s a lot easier for those teams to take the train to Stamford rather than flying to London,” says Dominic Torchia, manager, remote technical operations and engineering, NBC Sports. He was heavily involved with the design of NEWBERT in early 2017. 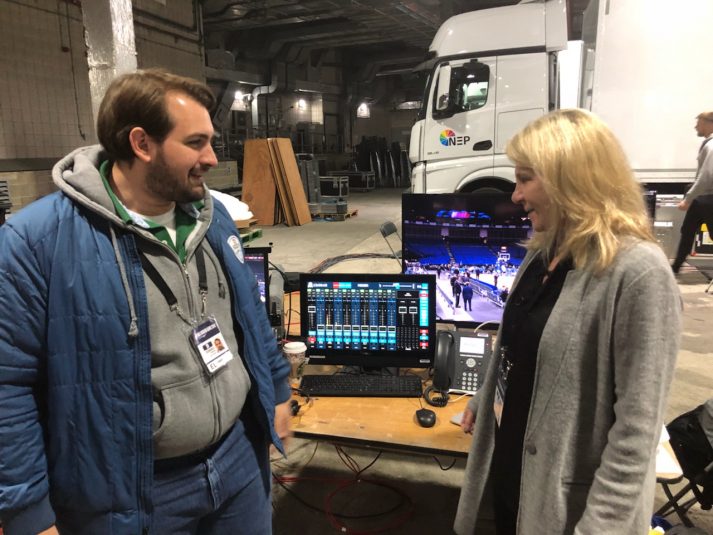 The NEWBERT system is contained in six flight cases and includes a good-size Evertz EMR64 router. It fits into only 3RU onsite and is connected to the Evertz Magnum switcher in Stamford, where operators can control NEWBERT remotely. The kit is used to support two talent teams and six cameras, with eight feeds sent to Stamford and four returning. Those signals use a combination of JPEG2000 and H.264 encoding and are delivered via Tata circuits.

“We expanded the kit,” says Torchia, “and it connects to two full control rooms in Stamford, CT, where the production teams from Philadelphia and Boston are able to do independent shows with their own graphics.

The flypack also houses a Lawo-based audio core, a small intercom system, and an EVS replay unit. The producer, director, technical director, and replay, graphics, and audio personnel, working at NBC Sports in Stamford, can remotely control the necessary equipment from afar. An Evertz IP gateway and a small Cisco router play an important part in making it appear as if the control room is located onsite.

“The Lawo commentary system provides the perfect number of resources we need for a show like this,” says Torchia. “It plugs into the Ethernet, and everything is ready to go.”

Local audio mixing is performed via Calrec Artemis audio consoles in Stamford so there is no need for an A1 to be onsite. And both control rooms have independent outputs.

The next stop for NEWBERT will be Minneapolis for Super Bowl LII, where it will be used for Super Bowl Live, which will be set at the Nicollet Mall. It will be tied to both NBC Sports in Stamford and the Super Bowl pregame truck at U.S. Bank Stadium. A second NEWBERT system will make the journey next month to South Korea for the 2018 PyeongChang Olympics, where it will connect the ice-hockey venue to Stamford.