Ratings roundup is a rundown of ratings news from the past week and is derived from press releases and reports around the industry. In this week’s edition, ESPN’s CFP National Championship ranks as the second most-watched cable telecast in history, The NFL’s Wild Card Game ratings were down across the board, ESPN matches its best regular season rating in nearly two years with Celtics-Cavaliers, ESPN and Sportsnet report their year-end viewership numbers, and First Take gets off to a huge start to 2018 for ESPN. 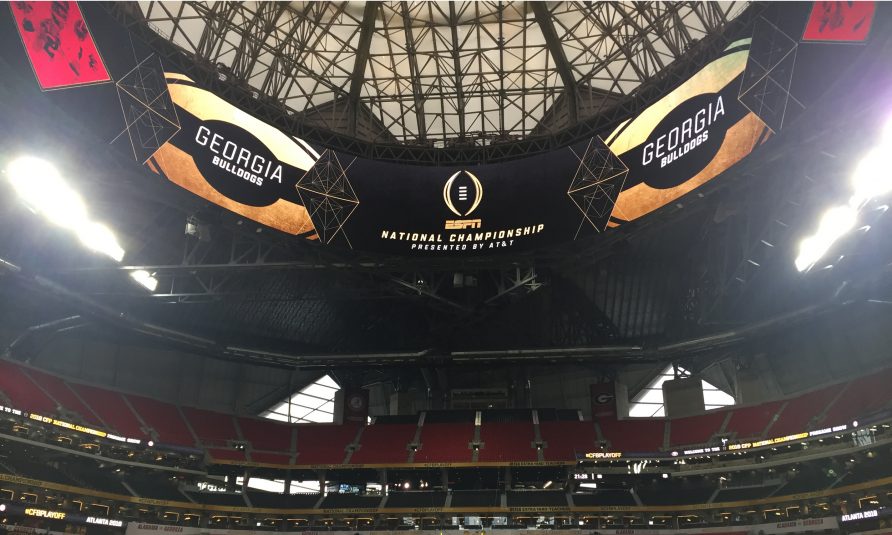 ESPN’s presentation of the Georgia-Alabama College Football Playoff National Championship averaged 28,443,000 viewers on its Nielsen-rated networks (ESPN, ESPN2 and ESPNU as part of its MegaCast production), up 13% from last year and good for the second most-watched cable telecast in history. The game was also up 9% from ESPN’s MegaCast presentation (ESPN, ESPN2 and ESPNU) of the second CFP National Championship (January 11, 2016). For Georgia-Alabama, the ESPN-only telecast averaged 27,383,000 million viewers. The College Football Playoff Era has delivered ESPN the four biggest audiences in cable history and seven of the top 10 with the 2015 CFP National Championship (Oregon/Ohio State) atop the leaderboard with 33,917,000 viewers.

The audience peaked at 30,759,000 viewers late in the first half (9:30 – 10 p.m.) and more than 28.4 million viewers were watching as Alabama scored its game-winning, national championship-winning touchdown

Birmingham was the No. 1 rated market, with an astounding 57.6 overnight. Atlanta also had a record-breaking audience. All market information was distributed this morning and can be found here.

ESPN’s entire presentation of the three game College Football Playoff  averaged an 26,266,000 viewers, up 21% from last year’s three-game presentation. In addition to the championship game, each of the two CFP Semifinals were also up year-over-year individually as well.

Factoring in the entire New Year’s Six, the seven games (New Year’s Six + CFP National Championship) averaged over 17 million viewers, the best ever in the four years of the new system. The seven-game average was up 10% from last year’s same seven games and 25% from the 2015 season’s slate.

This season’s two CFP Semifinals averaged  24,590,000 viewers, up 27% from last year and 44% from the 2015 season. Individually, both games rank as the third and fourth most-viewed CFP Semifinals ever, trailing only the two record-breaking CFP Semifinals from the inaugural year.

ESPN’s Celtics-Cavaliers Telecast Matches Best Regular Season Rating in Nearly Two Years
ESPN’s telecast of the Boston Celtics victory over the Cleveland Cavaliers on Jan. 3 delivered a 2.4 metered market rating, according to Nielsen. It matches two Christmas telecasts as the highest-rated NBA regular season game on ESPN in nearly two years. The 2.4 rating is up 60 percent from a 1.5 rating for last year’s comparable game – Cleveland vs. Chicago. Last night’s telecast peaked with a 2.7 rating between 9:30-10 p.m. ET. In the Cleveland market, the game delivered a 6.2 rating, the best since a Cleveland-Miami matchup on ESPN drew a 6.4 on October 30, 2015. Wednesday’s telecast generated a 4.2 local rating in Boston, which is the second best rating on ESPN this season in the market.

ESPN Sees Live Events Drive Audience Increases in 2017
ESPN’s 2017 viewership in prime time and in total day rose vs. 2016, while the network returned to its familiar spot atop cable networks in fourth quarter prime-time viewership and continued its streak of leading full-time cable networks in the key male demos to 18 consecutive quarters (4.5 years). In 2017, ESPN averaged 2,058,000 viewers (P2+) in prime time across TV and streaming, an increase of 7% over 2016.  ESPN grew its audience among men and adults 18-34, 18-49 and 25-54. ESPN also saw its total day viewership rise 1%.

In the fourth quarter, ESPN grew its audience 13% in prime to 3,052,000 viewers across TV and streaming, the best on cable, as it had accomplished from 1999 – 2015 before the aberration of last year’s political climate pushed ESPN to second place (behind Fox News).  Audiences also rose by a double-digit percentage among men and adults 18-34, 18-49 and 25-54.  ESPN’s total day viewership rose 9%. In addition, the recently completed quarter was the 18th straight in which ESPN led full-time cable networks in delivering the key male demographic groups advertisers covert:  men 18-34, 18-49 and 25-54.

The prime-time edition of Sportsnet Central was the most-watched sports news program in 2017, delivering an average minute audience 48% higher than its closest competitor. Sportsnet’s Hockey Central national pre-game show has grown 60% year-over-year and outperforms its closest competitor by 147%, solidifying Sportsnet’s roster of hockey experts as the go-to source for opinion and analysis.

For the 2017-18 NHL season to-date,Hockey Night in Canada Game 1 is up 5%, Hockey Night in Canada Game 2 is up 2%, Scotiabank Wednesday Night Hockey is up 31%, Calgary Flames regional broadcasts are up 17%, Toronto Maple Leafs regional broadcasts are up 2%. When including Sportsnet’s Hockey Night in Canada broadcasts that air simultaneously on City and CBC, the overall audience share for Sportsnet-produced programming in 2017 increases to 6.6 from 5.2. The 2017 Stanley Cup Playoffs delivered an overall average minute audience of 1.61 million on Sportsnet and CBC channels, marking a 94% increase over the2016 Stanley Cup Playoffs. The Top 10 broadcasts of the year on Sportsnet were all from the 2017 Stanley Cup Playoffs, with Game 6 of the Washington vs. Toronto first round series being the most-watched hockey game in Sportsnet history, reaching 8.4 million Canadians.

On the digital front, 3.22 million Canadians visited Sportsnet digitally each month in 2017, jumping two spots to #4 on the most-visited sports websites in Canada. April 2017 was the highest month in Sportsnet.ca history with 4.5 million unique visitors, with NHL playoffs and the start of the Blue Jays season. Based on current 2017 year-to-date data, the Sportsnet App has experienced a 35% year-over-year growth in average monthly unique visitors and set an all-time record in the month of April with 498,000 unique visitors. With more exclusive content and the ability to access the sports fans love from anywhere on any mobile device, Sportsnet NOW has experienced a 35% increase in paid subscribers over this time last year.