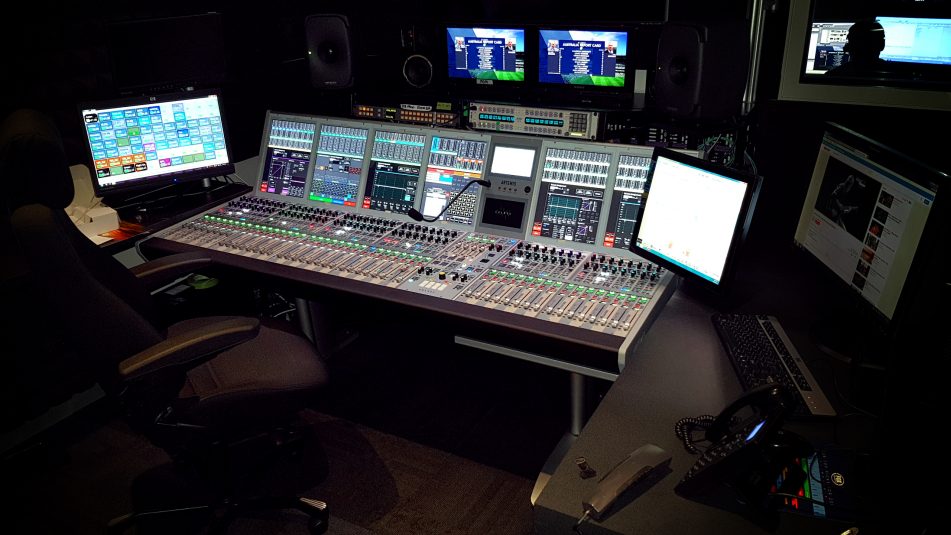 The decommissioning of the Zeta and then installation and commissioning of the Artemis took less than 48 hours by a team assembled by FOX SPORTS Australia Broadcast Projects Engineer Mick Gergos. The show files were prepped and checked beforehand, so when show time arrived, the operators pushed up the faders and were off without a hitch into very familiar territory.

“When it came time to upgrade to a new console in our main broadcast facility, the Artemis was an easy choice. Since we already work with the same desk in our other studio, adding a new Artemis guaranteed a smooth transition for our crew,” says FOX SPORTS Australia Network Head of Audio Antony Koveos. “We effectively mirrored and networked the facilities by adding Dante cards in both studios and the intercom system. This has given us a high-capacity intercom interface that extends to the outside world and is now available on our outside broadcast network.

“Through our years of experience with the Zeta consoles and previous Calrec compacts, we’ve become accustomed to the core feature set, outstanding reliability, and quality of Calrec products — especially the sound quality,” he adds. “In a world of many look-alike, me-too products, it is very easy for the uninitiated to be swept away by marketing promises and sales hype, and it’s become even more difficult to find the essential operational functions and features. Simple things like the quality of faders, switches, and knobs, as well as logical, instinctive, and comprehensive monitoring and metering, are other requisite areas many fail to appreciate, but that really stand out on Calrec desks.”

The new 48-fader Artemis console is installed in Studio B. Key drivers for FOX SPORTS to add the second Artemis were the ability to link it via Calrec’s Hydra2 network to the existing Artemis in Studio A for a seamless exchange of audio signals, and the ability to add Calrec’s RP1 remote production unit to remotely control signals in the field from an Artemis surface in a studio control room.

Koveos adds, “The opportunity to call up any function on any panel, replicate them on multiple panels, split the surface for multiple users, and set up alternate monitoring quickly and easily are just some of the benefits that make Calrec consoles user-friendly and highly functional in an ever-changing production environment. Add to this the on-board automix, fader / function control from GPI, or external automation control, and you have a very powerful and versatile system. But we don’t just value Calrec’s advanced feature set — we also know we can count on outstanding customer support from both Calrec and our local distributor, Syncrotech Systems.”

Calrec International Sales Manager Anthony Harrison says, “Like many other high-profile broadcasters around the world, FOX SPORTS knows it can count on Calrec consoles to deliver not only the industry’s most robust, flexible, and easy-to-use feature set, but also the highest-quality sound output. It’s a privilege to continue our long-time collaboration with FOX SPORTS. They know from experience that our solutions will take them forward as they expand into emerging paradigms, such as remote production, that open up new possibilities for efficiency and cost savings.”