The Ivy League has promoted Matt Panto to Associate Executive Director for Strategic Communications and External Relations. In his new role, Panto will oversee the League’s communications team and overall strategy. He will also manage all of the League’s external relations efforts, including television, licensing, merchandising and the League’s marketing and sponsorship partnership with JMI Sports. 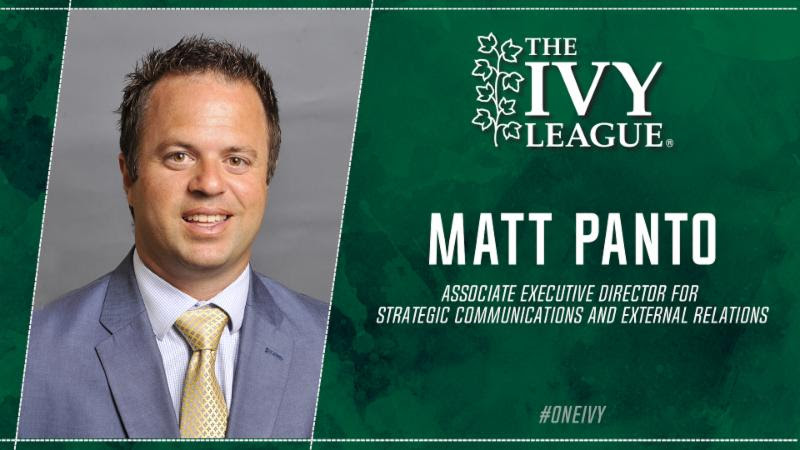 Matt Panto has been promoted to Associate Executive Director for Strategic Communications and External Relations.

“After conducting a national search that resulted in an incredibly deep and diverse pool of candidates, I am confident that we have identified the right person for this critical position,” said Ivy League Executive DirectorRobin Harris. “Matt has been an invaluable member of our staff for over four years, most notably with his management of the Ivy League Network (ILN) since its inception, as well as more recently his oversight of the League’s television arrangements. He has shown a deep appreciation for the unrivaled experience the Ivy League provides at the pinnacle of higher education and intercollegiate athletics. I look forward to his progressive thinking, enthusiasm and leadership skills taking us to new heights.”

In addition to the oversight of the Ivy League Network (ILN) and the League’s overall digital media initiatives, Panto has managed the League’s television partnerships since September 2016. He is also responsible for the live production and on-demand content for the League’s 14 championship events. Prior to arriving at the Ivy League in 2012, Panto spent seven years at Lafayette College, beginning his time as the Multimedia and Marketing Manager before being promoted to Assistant Director for Digital Media and Marketing.

In addition to Panto’s promotion, the Ivy League announced the hiring of four key staff members.

Rutledge-Leverenz will continue to manage the League’s day-to-day sports communications efforts as well as serve as the primary media contact for several sports and League championships. He also plays an integral role in the administration for select sports.

In addition to the two promotions, Harris announced the hiring of Kelson Lumpkin as Assistant Executive Director for Compliance and Governance and Lisa Gratkowski as the office’s new Business Manager following the retirement of Regina Maguire.

Lumpkin came to the Ivy League after spending a year as a postgraduate intern at the NCAA office in Enforcement. A 2005 graduate of the United States Military Academy, Lumpkin competed on the men’s gymnastics team. He later received his Juris Doctor degree from Villanova University Charles Widger School of Law. Lumpkin will provide support to the League’s compliance and governance efforts and responsibilities.