Live From Super Bowl LII: With 16 Setups in Seven Locations, NFL Network Aims To Capture All of Chilly Minneapolis

In addition to the obvious cold weather here at Super Bowl Week, the Twin Cities have presented some geographical challenges for many broadcasters. To that challenge, NFL Media and its linear property NFL Network have one answer: be everywhere. 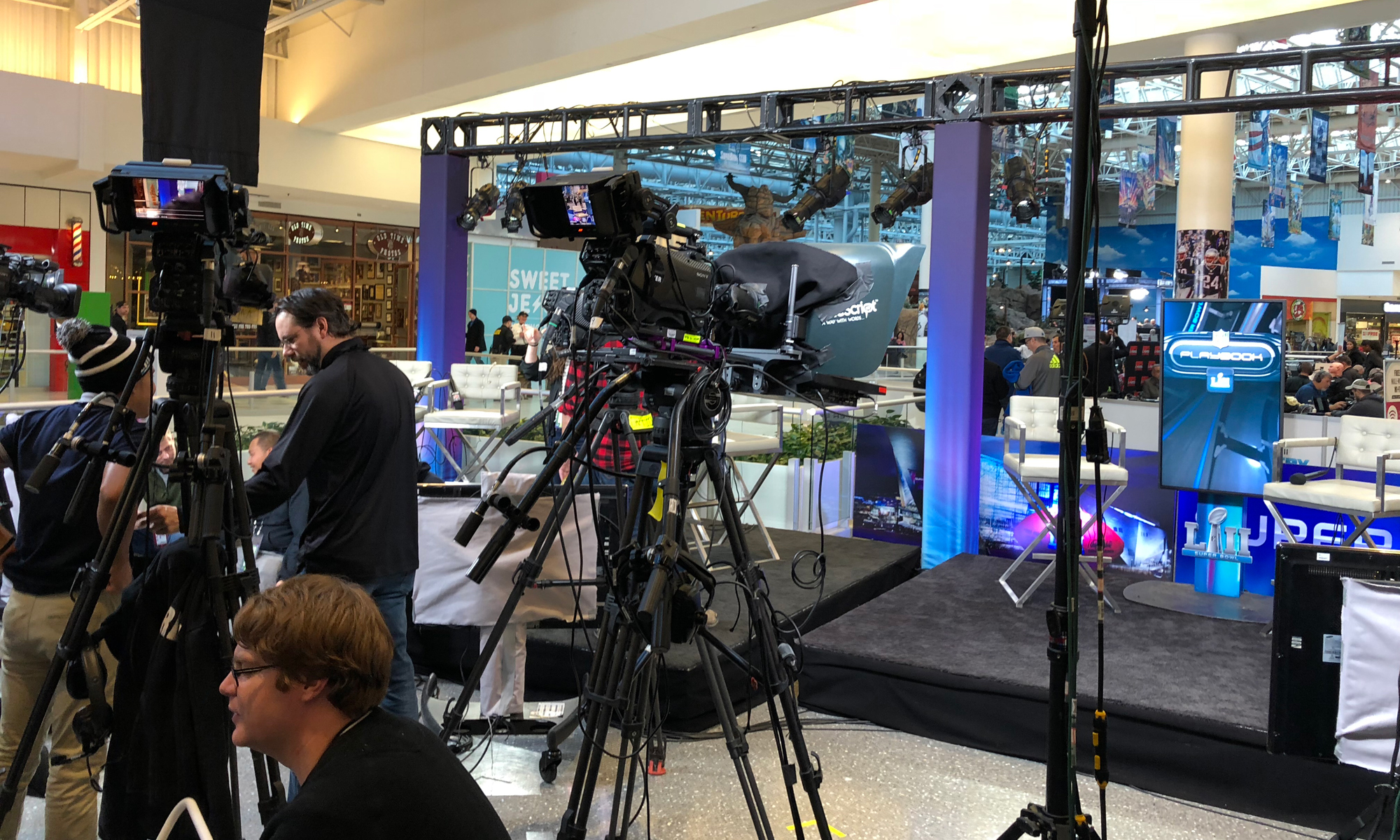 NFL Network’s set at Mall of America is one of its 16 locations across the Twin Cities for Super Bowl Week.

As with the Minnesota Metropolitan Area, there isn’t a unifying center point where everything happens. Instead, it’s a sprawling footprint with many exciting places to see and experience. Sure, one could point to Nicollet Mall — the 12-block portion of Nicollet Avenue cutting through downtown Minneapolis where the NFL has chosen to host the event’s linchpin fan activation: Super Bowl Live — but there’s also Opening Night across the Mississippi River at Xcel Energy Center in Saint Paul, Super Bowl Experience (or SBX) across downtown at the Convention Center, and Radio Row almost 11 miles away near the airport in Bloomington.

So, when it came down to establishing its presence at its biggest event of the year, NFL Media decided against the traditional method of a single mega remote set for all its programming and instead decided to sprinkle smaller setups throughout the Super Bowl experience. As a result, NFL Media has 16 setups in seven locations around the area.

“Our philosophy at NFL Media and NFL Network is to be everywhere,” says Dave Shaw, VP, production, NFL Media. “That’s what we do all day, every day. When we looked at Nicollet Mall, we had the choice of putting up a glassed-in set of some sort, but you have to look at the location. When you look at Nicollet Mall and what’s going on, there’s a lot of neat interactions along the route. So we decided to have three smaller locations along the way that allow us to capture more of it.”

NFL Network will deliver 85 hours of live coverage this week leading up to the game. That includes studio shows NFL Total Access and Good Morning Football and is highlighted by a pair of major productions in Monday’s Opening Night (formerly Media Day) and the NFL Honors awards show on Saturday night.

Here’s a list of NFL Media’s 16 locations: four along Nicollet Mall (three outside and one inside); two sets at the Convention Center (where many core studio shows will be filmed, including NFL Total Access, Players Only, and Super Bowl Live on game day); a set at Mall of America with Radio Row; also at Radio Row, a social-media–centric set called “Check Down” (which features a large purple couch); two sets at Xcel Center for Opening Night; two more positions at the Red Carpet Show for the NFL Honors; one setup at each of the team hotels; and three setups at U.S. Bank Stadium (a Filmwerks-designed glassed-in set outside the stadium, one on the sideline, and another up in the concourse near the stadium’s famous Gjallarhorn).

It’s a staggering effort that has NFL Media credentialing more than 700 people across all divisions of the company. Onsite crews are supported by a fully staffed facility at company headquarters in Culver City, CA, where three control rooms are working around the clock taking in feeds and producing the final cuts for much of the programming originating in Minnesota.

That brings us back to the cold, which, aside from sounding like simply a water-cooler talking point among a crew largely from Southern California, is a genuine concern for humans and equipment alike. All of the outdoor sets — including the three along Nicollet Mall — feature heaters and a nearby indoor warming station, where on-air talent and behind-the-scenes technical crew can retreat when not live.

“It feels like all we do is talk about the cold, but it is a real concern,” says Shaw, who is working his sixth Super Bowl for NFL Media. “We try to keep most of our sets and everything else inside, which is logical, but you want to get the outside flavor of Super Bowl Live. We embrace the fans, so we want to have our reporters right out there with them. But, yes, it’s cold.”

For technological support of these efforts, NFL Network has again enlisted Game Creek Video and VER. Game Creek’s Encore mobile unit is parked at the stadium to support work done there. In the meantime, Game Creek Pride will work NFL Honors on Saturday after having worked Opening Night on Monday. All the remaining setups are supported by VER-supplied flypacks, which send feeds to a basement location at the IDS Center, the tallest building in Minneapolis (and the whole state of Minnesota, for that matter). Mall of America also has its own flypack.

The long list of locations has also meant a greater need for fiber and redundant backups. NFL Media is working with The Switch, Level 3, and PSSI Global Services on connectivity and uplink to Culver City.

“Minneapolis has clearly been the most challenging Super Bowl we have had,” says Shaw. “Timing and changeover are so important. Technically, it’s as hard a [Super Bowl] as we’ve had. But our teams are amazing: it’s also been one of the smoothest we’ve had.”