Taking the new Golic and Wingo morning radio/TV show on the road for the first time, ESPN was challenged to come up with a way to institute a trim production while not skimping on quality. That led to the network’s first use of Azzurro Group’s Pop Up Studio product here at the Hard Rock Café inside Mall of America. 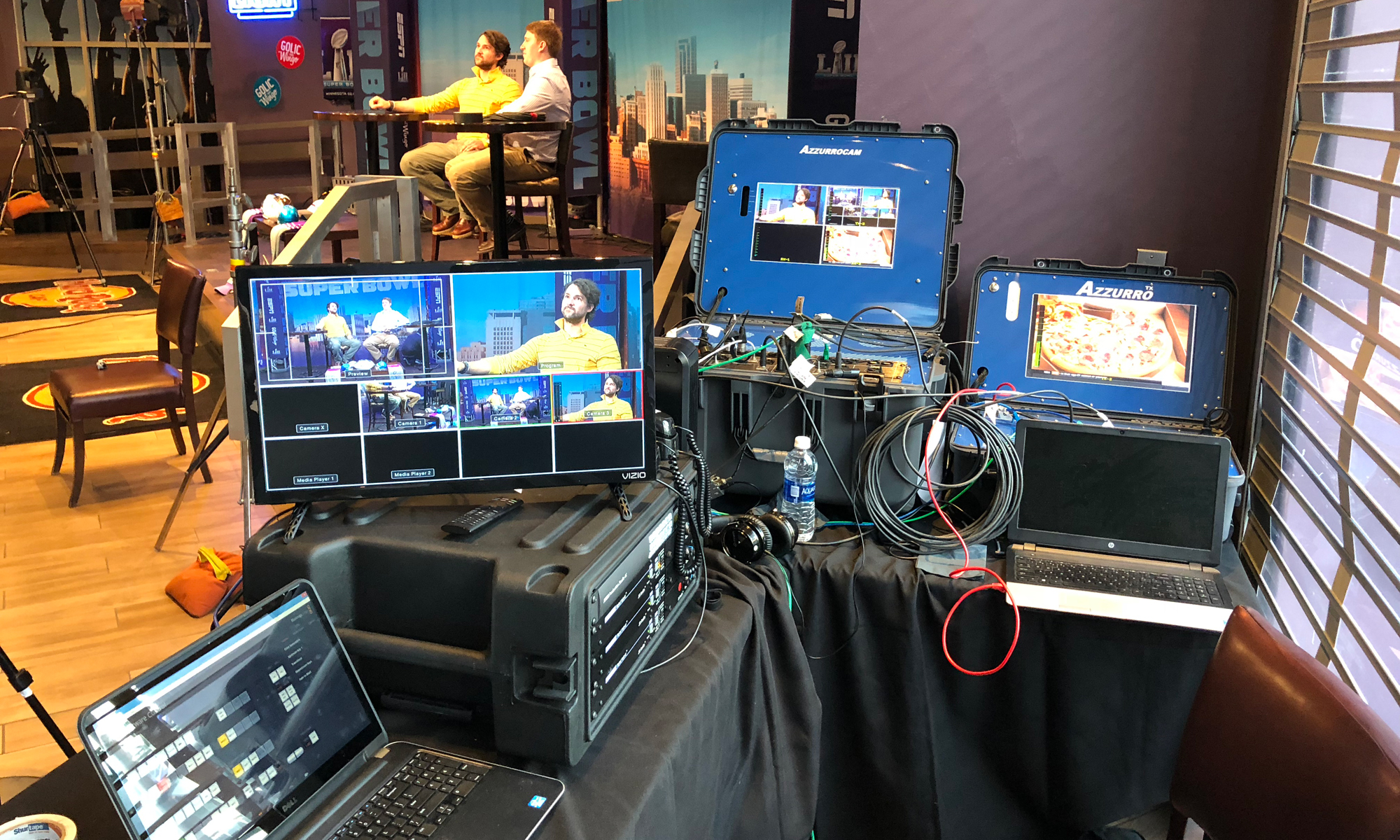 Azzurro Group’s Pop Up Studio is being used by ESPN at its onsite set at Hard Rock Cafe inside the Mall of America for Super Bowl LII.

The solution, essentially a studio in a box, keeps ESPN from having to roll up a production truck into the parking garages at the Mall and running cables to the set. Now, with the use of four discrete internet drops, the onsite crew is able to use the public internet to transmit both the television and radio feeds of the program to Bristol, CT, for final packaging.

The setup has proved so effective that ESPN is now also using it for popular on-air personality Stephen A. Smith, who will originate his portion of the debate show First Take (while his partners Max Kellerman and Molly Qurim remain at their set in Bristol) and for a Twitter-exclusive show called Double Coverage, which is hosted by Mike Golic Jr. and Katie Nolan.

“We’re learning, and, each day, I think we’re going to tweak some things,” says ESPN Operations Manager Carlton Young. “By Friday, I’m sure, we’ll have this down, and we’re hoping to create a blueprint of sorts where we can deploy this more often in the right environment.

“Every location may not be user-friendly for this application,” he continues. “If you want to plop a setup in a tailgate outside of a stadium, you are likely going to have to bring in a truck because all of this cabling can’t be hanging out in the elements. We would take something like that into consideration, but, in a format like this, it’s very feasible.”

The onsite set features three PTZ robotic cameras, all of which can be operated by the director sitting at a laptop with the Pop Up Studio equipment off to the side of the set. The solution has really slimmed down the onsite crew, which, from a technical standpoint, comprises three lighting techs, two operations managers, a network traffic technician, two Azzurro Group techs to set up the pack, a radio engineer, a director, and two utilities.

As for using the public internet for transmission, it’s certainly not a first for the company, but it is the first time it has been tried for this kind of remote studio programming surrounding a major event like the Super Bowl.

“If you take a look at the picture [on-air], it looks and sounds just as if we had a mobile unit out here,” says Young. “Bringing a truck in here and running cables would have been extremely challenging and costly to say the least.”