NEP is out in full force with one of its largest mobile-unit deployments ever for a single event. In addition to serving NBC Sports’ profusion of shows onsite, including providing its ND1 truck quartet for the main game production, NEP is serving a cavalcade of other clients in Minneapolis. In all, 14 NEP production trucks are on hand, totaling a whopping 32 trailers. In addition, nearly 90 technical and mobile-unit staffers, plus NEP’s management team, are onsite to drive the company’s various operations at Super Bowl LII. 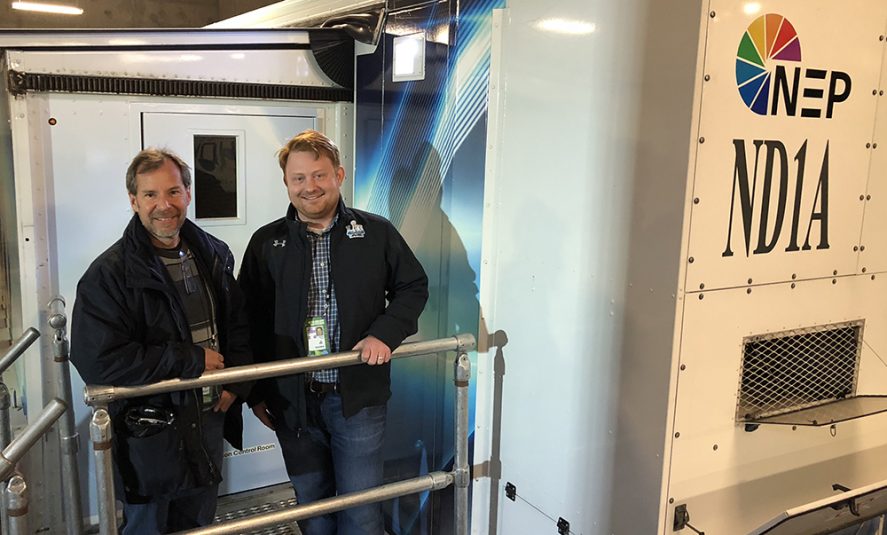 “This is definitely one of — if not the — largest NEP presences and largest shows that we have ever done,” says NEP U.S. President Glen Levine. “It not only shows our scale; it shows that we’re able to keep the small-company feel with the big-company resources. We have the ability to have account managers and engineering teams working with each individual customer, so they get what they need and aren’t lost amongst everything that’s going on. But we also have the resources to back it up with mobile units and now a full-service rental company, so it’s pretty incredible.”

ND1 at the Center of It All

In NBC’s lower compound at the U.S. Bank truck dock are ND1’s A, B, C, and D units, serving the main game production, and ND4 (A, B, C and D), housing tape release and additional camera/replay resources.

“ND1 was built to do this show,” says Levine. “When we built it, we [designed] it specifically for an NBC Super Bowl, and here we are. From a technology standpoint, we continue to upgrade as need be, but we haven’t run out of resources. This is really ND1’s opportunity to shine.”

While the Super Bowl marks ND1’s largest production of the year, the mobile unit is no stranger to massive shows, having worked NBC’s Sunday Night Football production for four seasons.

“The reality is that the Sunday Night Football package is a near-[Super Bowl-level show] every week,” says Dan Turk, chief engineer, NEP U.S. Mobile Units. “This isn’t a huge change for [ND1]. [NBC] and our team have built things up throughout the whole year to make this week easier. This is the culmination of a lot of planning and buildup [starting in] August.

From Truck to Flypack: Building an ESU From Scratch

NBC also required NEP’s ESU signal-distribution mobile unit, but the U.S. Bank Stadium truck-dock area could not accommodate another truck in the crowded lower compound. Therefore, NEP created an ESU flypack, which can serve NBC’s colossal signal-routing needs in Minneapolis without the footprint of a full mobile unit.

“For this Super Bowl, the major challenge was that there just wasn’t enough room at this facility for everything [NBC] needed,” Turk explains. “NBC loves ESU and wanted it here, but they had nowhere to put it. So NBC came to us with the idea for a flypack, and we were able put that together to handle [tasks] like inter-truck wiring and connections, as well as reference and timecode for all the trucks. We built up a rack with router redundancy and all the normal standards that they would expect with ESU and brought it here. And I think it’s been very successful.”

In addition to ND1, ND4, and ESU, ND7 (A, B, C, and D) is serving the NBC Sports pregame studio show, and NCP14 is handling Telemundo’s Spanish-Language feed. In addition, SS32 hit the State Theater on Thursday to produce Golf Channel’s Feherty Live: Super Bowl Week.

Beyond NBC: Much More NEP in Minneapolis

Of course, NEP’s presence in Minneapolis is not limited to NBC. The production-services company is also providing EN1 A, B, C, and D and full fiber support for the NFL world-feed production, as well as ND5 for NFL Films’ production of Inside the NFL.

“One of the biggest pieces of our [support for] the NFL and the world is that is we provide all the fiber infrastructure,” Levine notes. “It all comes out of our fiber department. We send our crack team that essentially manages all the fiber, and they do an amazing job.”

NEP has also deployed four of its five Denali trucks throughout Minneapolis for various entertainment shows and shoulder-programming productions. Denali California will serve as the primary mobile unit for the Super Bowl LII Halftime Show, Summit will handle the NFL Honors awards show on Saturday at Cyrus Northrop Memorial Auditorium at the University of Minnesota, Yukon is working the DirecTV Now Super Saturday Night concert at The Armory in downtown Minneapolis, and Gold is on hand for the official NFL Tailgate Show on Sunday.

In addition, EN2 A and B are supporting ESPN International’s Super Bowl LII coverage.

Bexel has been a staple at Super Bowl compounds for years, but this week marks its debut as part of NEP after being acquired in August. The combination has not only expanded NEP’s arsenal of rental equipment but also significantly boosted its fiber-integration capabilities.

“We integrated the two fiber departments, and, obviously, Bexel had a very high-end fiber department,” says Levine. “Some [Bexel] folks are now NEP employees and are working with the fiber team, and there is also a long list of rentals that Bexel’s providing. [With] Bexel part of NEP now, it’s just one call for NBC to get whatever they need.”