NBC has a yurt-style set at Nicollet Mall, the main set and Coach’s Clicker set on the stadium concourse, and an on-field set

When Super Bowl LII kicks off on Sunday at 6:30 p.m. ET, NBC will have already been on the air for more than six hours in Minneapolis and used four state-of-the-art studio sets. And that’s in addition to the Peacock’s weeklong studio presence here, with an array of NBC Sports programs airing live from Nicollet Mall, the Mall of America, and outside U.S. Bank Stadium; also airing from the Twin Cities this week have been Today, The Tonight Show With Jimmy Fallon, NBC Nightly News, CNBC shows, Telemundo Deportes, and a variety of other NBCUniversal properties. 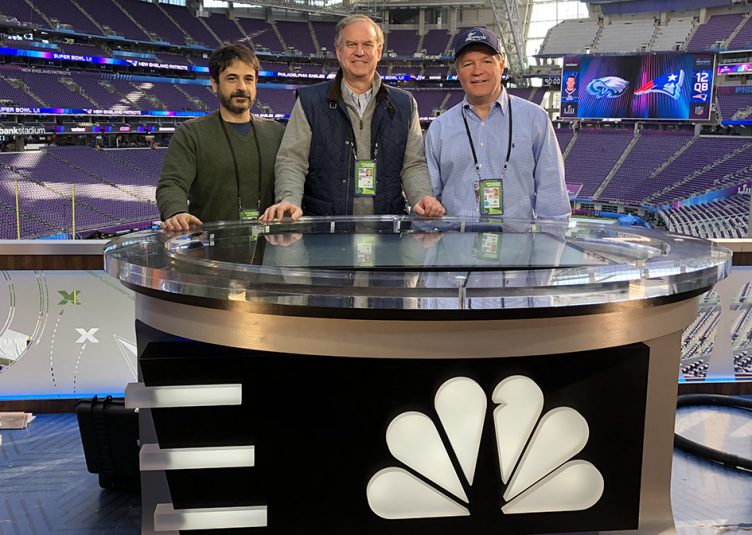 From right to left: NBC Sports’ Tom Popple, Ken Goss, and Craig Bernstein at the Coach’s Clicker set inside the stadium

“There is definitely a lot of synergy here, and we’re trying to provide opportunities for [all of our shows] to shine,” says Tom Popple, VP, studio operations and facilities, NBC Sports. “Thankfully, we have great support teams to handle all that. If we didn’t all work together, this just wouldn’t work. You can’t do something like this without everybody being on the same page. You’re going to run into issues, and we’ve had a little bit of that. But we’ve been able to respond, and it’s been really great.”

NEP’s ND7 mobile unit (A, B, C, and D units) is on hand to serve as the home for NBC’s studio productions onsite. Construction and setup on NBC’s sets inside U.S. Bank Stadium began on Jan. 22, on its Nicollet Mall location Jan. 18.

“This is a one-team effort, reflected  in the synergy we are seeing both technically and operationally across all our productions,” says Ken Goss, SVP, remote operations & production planning, NBC Sports Group.

The Yurt Set at Nicollet Mall: A Key Multipurpose Tool for NBCU 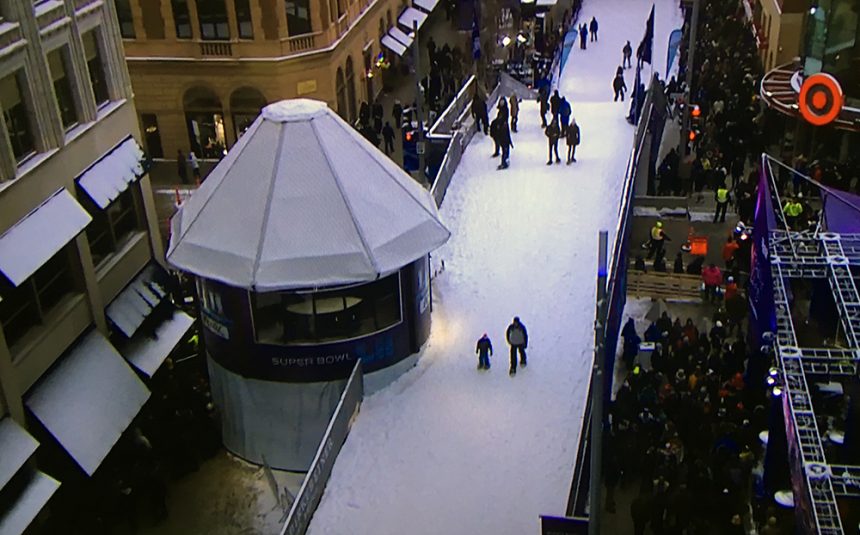 NBC’s yurt set is a circular set topped by a 20-ft.-diameter crown that is attached to a snow hill at Nicollet Mall in downtown Minneapolis

Dubbed the yurt set, a circular set topped by a 20-ft.-diameter crown is attached to a snow hill at Nicollet Mall in downtown Minneapolis. The snow hill serves as a fan activation with skiing, snowmobiling, and hockey. The set features four cameras, including a jib, and a new desk with a front-mounted monitor.

The set has served as the home to NHL on NBC intermission breaks all week and will host Today on Friday and Saturday morning and NBC Nightly News on Saturday night. On Sunday, NBC will open its Super Bowl Pre-Game show at noon from it.

“It’s a really amazing set, so we are using it wherever we can,” notes Popple. “When you look at all the shows that are running out of there, we are really getting the bang for the buck.

At 1 p.m. on Sunday, NBC Sports pregame coverage will move inside the stadium with two side-by-side sets on the concourse level serving as home to four-plus hours of pregame coverage. 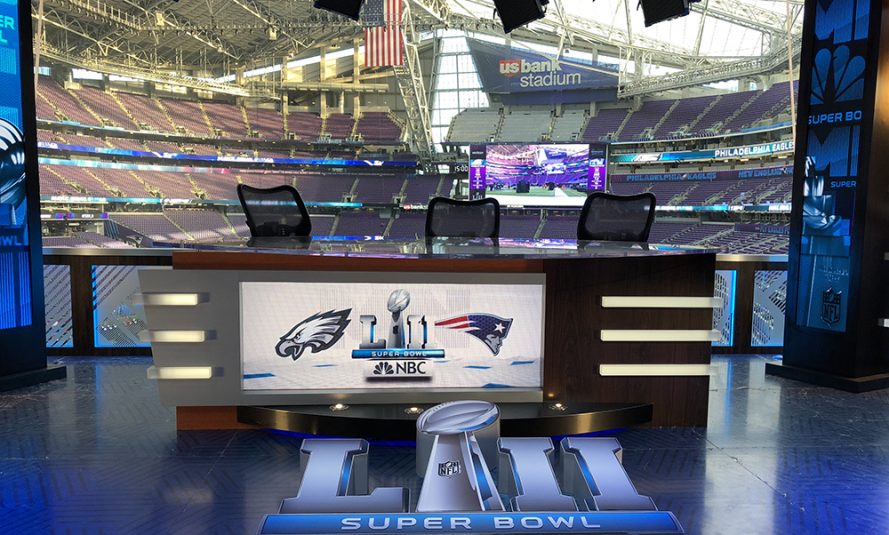 “In Phoenix, we had a double-decker set, which made sense because of the footprint we were given,” says Popple. “But here, we were able to get enough space to go side-by-side. The double-decker was a really cool concept and looked great, but, for functionality and space, this is obviously a better design. And everyone has been really happy with it on the production side — both [producer] Pierre [Moossa] and [EP/President of Production] Sam Flood — so it’s really been a great fit.”

The primary 20- x 16-ft. set is outfitted with four cameras, including a jib. It also features the same desk that NBC deployed at Super Bowl XLIX in Phoenix and used all season for its Thursday Night Football coverage but with an LED display in front (instead of the lightbox used on TNF). AG National is providing all the LED displays throughout the set, including the vertical columns, header, and front-of-the-desk displays. 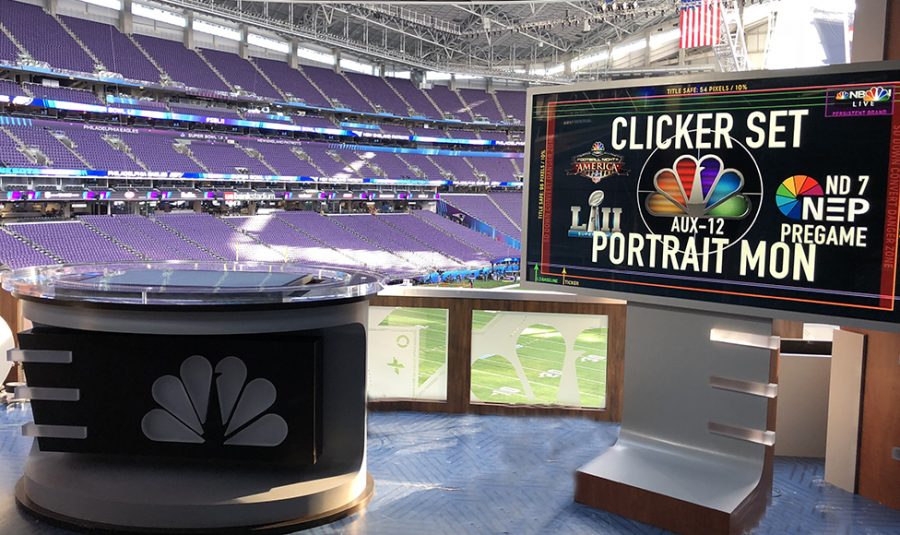 NBC Sports has created a “Coach’s Clicker” set next to the main set, where analysts will dissect the game using a touchscreen.

Immediately adjacent to the primary set is the Coach’s Clicker set, which features a small desk and a large touchscreen that will allow analysts (including special guest Baltimore Ravens head coach John Harbaugh) to break down specific elements and schemes from the Eagles and Patriots. The set is equipped with two hard cameras and a Steadicam.

A small bridge built between the main set and the Coach’s Clicker set will allow talent to move between the two locations without having to reenter the public concourse area.

Roughly an hour before game time, Dan Patrick, Tony Dungy, and Rodney Harrison will head down to the field set for On Field Live. This set, the same one used for Sunday Night Football, will have three hard cameras, an RF Steadicam, and an RF handheld. 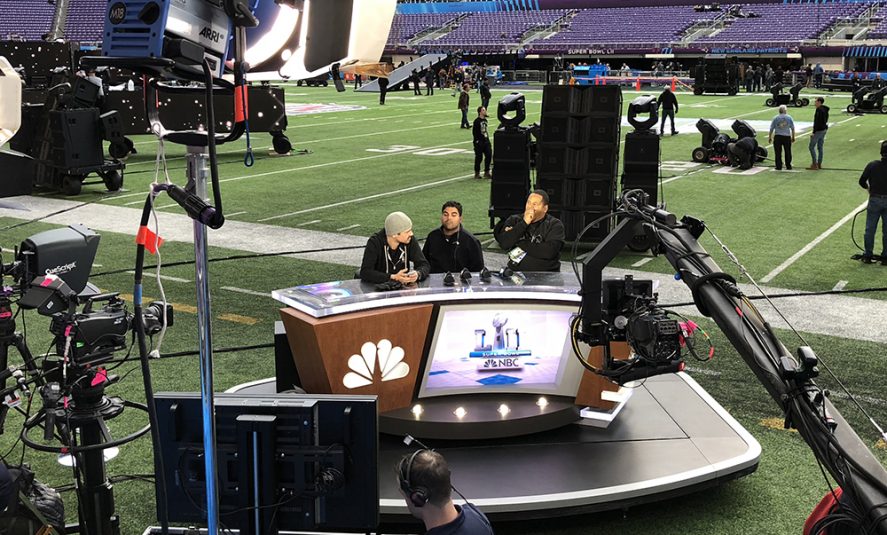 Design and infrastructure for all of NBC’s Super Bowl sets were provided by ISD (Innovative Show Design) with lighting by LDG (The Lighting Design Group). In addition, Saturday Night Live lighting director Geoff Amoral is serving as the lighting director for the interior sets.

NBC’s Pre-Game Show will also include live segments and musical performances by Sting and Darius Rucker from the Super Bowl NFL Tailgate Party at the Minneapolis Convention Center. NBC has established a fiber pipe via Centurylink to home-run these feeds to ND7 at U.S. Bank Stadium for integration into the Pre-Game Show.

“We’re definitely ready to go today, but we’re polishing,” says Popple. “You don’t try to rush because, with [background] scenery like this, you want to make sure it’s perfect. Everything looks great. We have a full run of show on Saturday, then we’ll get some sleep, and the big day comes on Sunday.”