At Super Bowl LII, Canon lenses will be ubiquitous throughout NBC Sports’ game production. NBC is deploying almost exclusively Canon lenses — more than 60 in all — the only exceptions being for the specialty camera systems: the pylon cams at both end zones, four Sony HDC-4800 4K cameras, and a pair of SkyCam systems. However, it’s not just gear that Canon is providing in Minneapolis; it’s also a high level of onsite technical support. 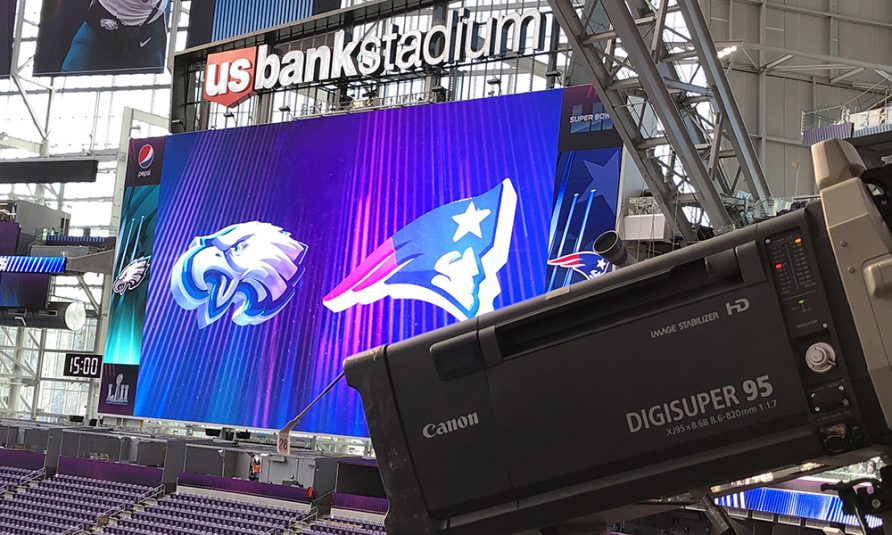 NBC is using more than 60 Canon lenses for its Super Bowl LII production.

“This one of the biggest shows of the year — or even multiple years — for a lot of people out here,” says Richard Eilers, national accounts sales director, ITCG Professional Products Sales Engineering Division, Canon USA. “And then you have a lot of them heading over to Korea on Monday [for the Olympics], so there is definitely a lot of stress surrounding these shows. It’s our job to take away the stress point from a technology standpoint. We just want to make sure that the lenses are well-dressed and ready to do any shot that might be asked of them.”

Ron Brevot, technical support supervisor, Canon USA, is onsite here in Minneapolis supporting any questions or issues that may come up during NBC’s operation.

From 95Xs to ENG Lenses, Canon Is Everywhere

“We have found that the bread and butter for this show is the 95X lenses,” says Eilers. “It is perfect for the cameras that are going to be closer to the field, like the Chapman [carts] on the sidelines and low–end-zone reverses. Not only are they reaching down to the other side of the field and doing their reverse work, but, at the same time, they can get some great shots on the near end of the field, too.”

“These lenses are tough, they’re resilient, and they can take a beating. But you always want to prepare with backups,” says Eilers. “On a show of this magnitude, we don’t want to leave anything to chance, so we brought in box-lens and handheld-lens loaners, just to ensure that, if something happens, God forbid, we are prepared. [NBC Sports director] Drew [Esocoff] is going to take every single one of these cameras; he’s one of the guys that uses everything in his arsenal, so we want to make sure that we have something to back up every camera just in case one of them goes down.”

CPS on Hand Supporting Pro Clients in the Twin Cities

Canon Professional Services is also on-site in full force with CPS Director Elizabeth Pratt leading the way. CPS has deployed a massive amount of equipment in Minneapolis, stocking and loaning out anything from DSLR bodies and lenses to cinema EOS bodies and cinema lenses to pro clients in attendance at the game.

Canon also provides free loans of gear to the pro market base, as well as full photographic and cinema service and support. In addition, two techs are on hand to support sports clients utilizing Canon DSLR’s.

Not Done Yet: Canon Heads to PyeongChang To Support the Peacock

With yet another major sports event on the horizon for NBC, Canon’s extensive onsite support won’t end in Minneapolis. The company has already sent two full-time support staffers to PyeongChang to be embedded in the NBC Olympics operation.

“We know that [the Olympics] is the most premium show on the planet, and we know what that requires. So we have to be there in force to support NBC,” says Eilers. “We have two techs that are going to be there full-time, and they’ve already been over there for a few days now. The NBC folks are our complete and absolute priority in terms of taking care of their needs and supporting them in the field.”

Brandon Costa contributed to this article.