Live From Super Bowl LII: U.S. Bank Stadium Ready To Put on the Video Show It Was Built For

Since the first beam went up on this massive structure in Downtown Minneapolis, U.S. Bank Stadium has been building to this moment. Super Bowl LII is here, and an all-star team from Van Wagner Sports & Entertainment Productions, stadium manager SMG, and the Minnesota Vikings is ready to put on a Super Bowl videoboard production for the ages. 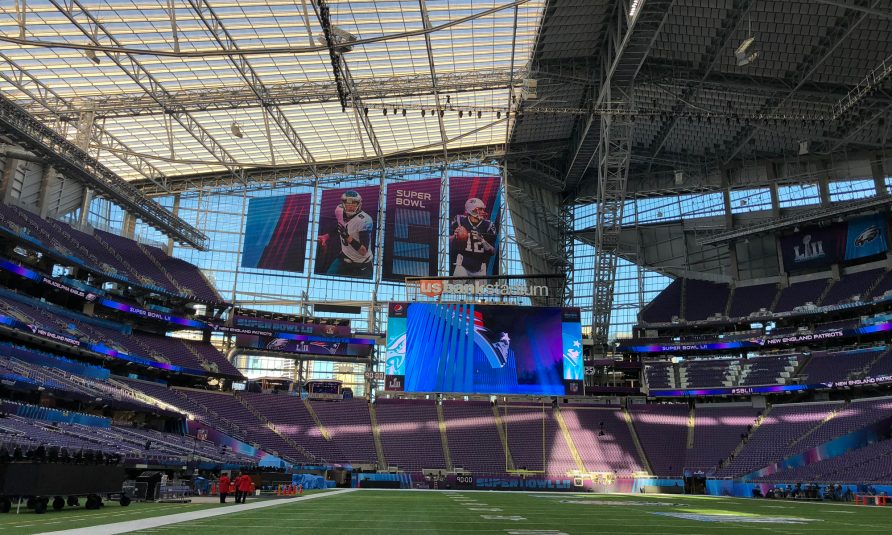 U.S. Bank Stadium in Minneapolis is playing host to its first Super Bowl.

When 66,000-plus pack into the sparkling bowl, they’ll be treated to quite a few in-venue firsts on those boards, including the Super Bowl debut of SMT’s Yellow 1st & 10 line, a completely new Super Bowl LII graphics package, and an expanded arsenal of camera angles.

“Every Super Bowl, we’re tasked with moving the needle,” says Bob Becker, EVP, ‎Van Wagner Sports & Entertainment (VWSE) Productions, which has designed the videoboard. “What can we do differently this Super Bowl that we haven’t done in the past? That’s our constant challenge. This is my 23rd [Super Bowl], and, every year, it gets bigger and bigger and bigger. When it’s over, you say, ‘Wow, what a great job,’ and then you start stressing about next year and wonder, ‘Well, how do we top that?’ That’s how I feel about that: you’ve got to always up your game.”

The stadium’s crown jewels are a pair of Daktronics video displays behind the end zones that measure 68 x 120 ft. and 50 x 88 ft., respectively. This year, for the first time at a Super Bowl, those boards will feature a full complement of the Yellow 1st & 10 line. SMG and the Vikings had a standing relationship with North Carolina-based SMT throughout the season, offering the yellow line encoded on their 50-yard-line camera. For the Super Bowl, they chose to expand it to include the other main cameras at each of the 20-yard lines. SMT’s Ben Grafchik will be sitting at the front of the control room, calling up specialty data-driven graphics, tickers, and data feeds for the control-room crew to call up as they desire.

Those advanced graphics are part of a completely fresh graphics package that Van Wagner has developed for this game. It’s the classic hard work done by the company: build a season’s worth of graphics to be used on a single night. Also, not only does Van Wagner come in and take over the U.S. Bank Stadium control room, but its team has basically torn it apart, pulling out gear and replacing it with specialty systems in order to take the videoboard show to that next level. 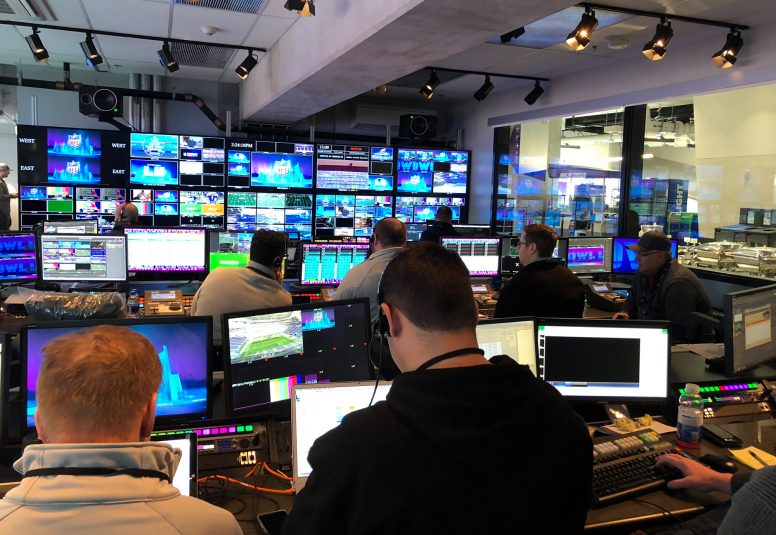 A crew of nearly 100 people are working the in-venue show at Super Bowl LII at U.S. Bank Stadium.

“It’s not because it’s not good,” says Becker, “but that’s how we make it bigger and better. Sometimes, you’ve got to b