Tons of live programming, UHD HDR are on tap for viewers across the U.S.

The 2018 Winter Olympics from PyeongChang, South Korea, will be under way in less than 24 hours, and, for Dave Mazza, SVP/CTO, NBC Sports Group and NBC Olympics, launch preparations have gone smoothly so far. 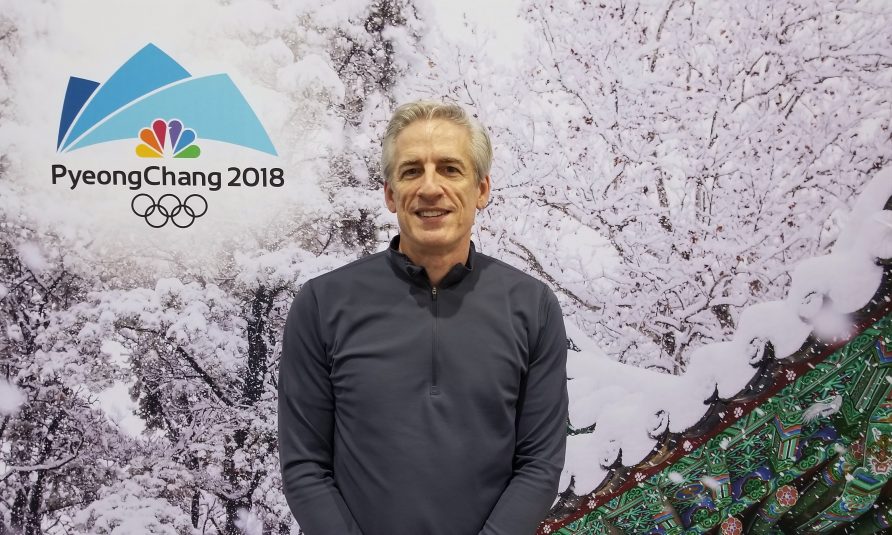 “Things are going really well, and it has been a good setup, better than the past three or four Games,” says Mazza. “Our team has been awesome, and, while we had a few snags with people getting sick, fortunately, everyone is doing well now.”

He credits a few things for NBC’s being ahead of where it usually is at this stage of preparation. Olympics Broadcast Services (OBS) and the PyeongChang Organizing Committee for the Olympic Games (POCOG) took construction of the International Broadcast Center (IBC), venues, and facilities to a new level of readiness, especially compared with recent Games. The 2016 and 2014 Olympics in Rio and Sochi, respectively, were plagued with construction delays, equipment shortages for things like outlets and power, transportation issues, and more. That is not the case in PyeongChang.

“The Koreans understand technology. They also do a nice job with construction,” says Mazza. “And they don’t do anything halfway. At times, we had to tell them, ‘Hey, guys, this is just a temporary setup’ while they were welding something that was designed to last forever.”

This is also the second Games for which OBS broke down the previous IBC building, packed it into more than 300 shipping containers, and rebuilt it for the next Olympics. 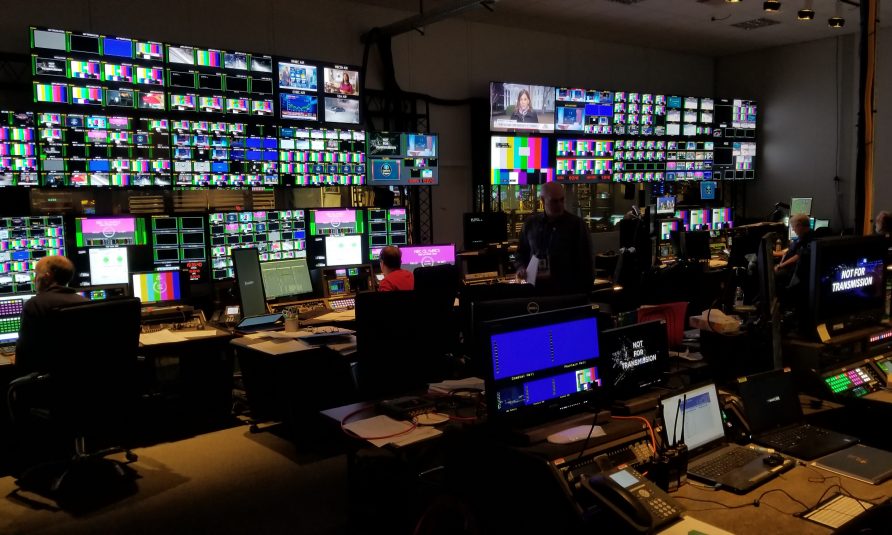 The NBC Olympics broadcast operations center is gearing up for 18 days of Olympic coverage.

“All of the panels, columns, and electrical systems were up when we got here. It was a godsend because it took all of the variables out of the equation,” says Mazza. “Our space was clean, ready to run cables, and the power was good. And, so far, the telco connections have been without incident. Both OBS and the KOBOC have done an excellent job of getting everything ready.”

While OBS and the South Koreans were busy getting the venues and IBC ready to go, the NBC Olympics team in Stamford, CT, spent months making sure the IBC systems were tested and retested to ensure that they would be ready for the massive workload of the next three weeks.

“We did a much better job of prefabricating and preconfiguring everything in Stamford,” says Mazza.

For example, the media-asset–management (MAM) system in PyeongChang was configured in Stamford, a floor below the system that it is now connected to. That gave the NBC Olympics MAM team, as well as vendors and freelancers, a chance to test the system and make sure it was running properly before it was packed up and shipped to PyeongChang.

“Avid also wrote some bots to simulate hundreds, if not thousands, of users and keystrokes to test the load that was a problem in Rio,” says Mazza. “And we had a WAN simulator to test latency.”

NBC also brought in some of the members of the freelance team that would use the system in PyeongChang to work with it in Stamford. The result was a team that was able to hit the ground running on arrival in PyeongChang.

By the end of December, the NBC Olympics technical team was about two weeks ahead of where it has usually been in terms of readiness. In fact, the main drain on people was not the strain of getting ready for the Olympics but, instead, being in South Korea during a tense time geopolitically.

“Even though we have learned to keep our heads down and get the job done, we haven’t been anywhere where there are actual threats of an all-out war from both sides,” Mazza points out. “We have dealt with Zika, security problems in Russia, and terrorist threats, but not a threat of war. Having said that, PyeongChang feels like an incredibly safe place.”

In terms of technical and production changes, the team has made a lot of changes on the venue side of operations and a bunch of small tweaks to the IBC operations.

“On the venue side, we took what we have been doing with the at-home efforts in the States and applied it to the venues,” Mazza explains. “So we are doing some significant at-home productions in the IBC and also back in the States.”

“Also, the jumping venue, which used to be done from a flypack, is now using an AT&T Media Links kit to move eight feeds from the venue to here at the IBC, where it will be produced from Control Room X,” says Mazza. Control Room X made its debut in Rio and was used to remotely produce women’s basketball games.

NBC’s NEWBERT flypack will also be in use for both hockey coverage from the smaller hockey arena and the Closing Ceremony. The NEWBERT system is contained in six flight cases and includes a good-size Evertz EMR 64 router. The flypack also houses a Lawo-based audio core, a small intercom system, and an EVS replay unit. An AT&T Media Links frame will send 36 feeds to Control Room X for the Closing Ceremony through a 10-Gbps link.

The Alpine events will also make use of some remote connectivity. The core NBC production-truck facilities, provided by Game Creek Video, will be located at the speed hill and connected to an eight-camera flypack and a routing switcher located at the technical-skiing venue, where the slalom events are held. Located an hour apart, the production team at the speed hill will be able to cut the technical-skiing show, thanks to a 10-Gbps circuit that will deliver eight camera feeds and 20-24 split feeds from the host production.

“We also have been able to save a truck at the Alpine events by having an eight-camera flypack and a C-World flypack routing switcher,” says Mazza. “We will cut all the alpine events in that truck.”

Latency for the at-home systems is about 250 ms, and the Lawo long-distance commentary units have been designed to remove latency when throwing to announcers.

“We also expanded the VSM control system,” says Mazza, “so it touches all of the venues.”

The decision to keep some of the at-home efforts based in the IBC, he adds, was based on two factors: cost of the bandwidth to transport dozens of camera signals to Stamford and also the emotional impact on the production teams.

“The producers want to be able to meet with the talent every day or talk and do camera diagrams with the camera guys,” says Mazza. “We think we have overcome the technical side of being at home, and we have moved everything home that doesn’t have an intimate relationship between the production team, the local team, and the talent.

“There is a lot of subtle getting to know each other on a live event,” he continues. “And that doesn’t come just because they worked together last week.”

Going Live Coast to Coast
A big change this year for U.S. viewers will be that viewers outside of the East Coast will experience live primetime coverage rather than tape-delayed. On the West Coast, live programming will begin at 5 p.m., with local news following at 8:30 p.m. or 9 p.m. That will be followed by “Prime Plus,” NBC’s name for additional Olympics coverage that will air following the local news on the East Coast.

“It’s not a dramatic change but just means that the primetime crew carries over to what used to be the late-night crew,” says Mazza. “When the East Coast dips to black for the [late-night news], the West Coast will come on with something live that the East Coast won’t miss. And then, when the news is over, we will come back on with Prime Plus [on the East and West Coast].”

Despite the massive time-zone difference (PyeongChang is 14 hours ahead of the East Coast), there will be a tremendous amount of live programming in primetime (live skiing will be featured on 11 of 18 nights, figure skating on 12), and that is just the way Mazza likes it.

“Everyone is performing at their peak, and, when it’s done, it’s done,” he says. “There is a higher risk and definitely more pressure, but that usually just means people perform better. You just need to manage the risk of things going wrong.” 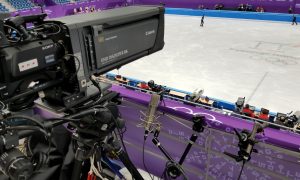 NHK 8K cameras will play a key part in NBC’s UHD plans as the 8K HDR signal will be downconverted.

UHD, HDR, and Atmos
NBC will expand its UHD and HDR coverage of the Games and also plans to distribute audio in Dolby Atmos.

“I’m excited about that,” says Mazza. “We are taking the 8K feeds with HDR from NHK and downconverting them to 4K in the HLG [format]. We have a couple of circuits going home to route the signals to Mobile TV Group’s Flex 39 truck, which is in Stamford. It receives the two feeds, and we have two announce booths in Stamford.”

The Dolby Atmos experience, which adds a more immersive sound field by adding in channels that deliver audio from above and more positions than the traditional 5.1-channel setup, will make use of additional microphones.

“OBS was kind enough to put out some height mics,” says Mazza. “We will send those home along with the 5.1 channels for a 10-channel mix that can be fed into the Atmos encoders.”

The UHD programming will be delayed by a day, similar to what occurred in the early days of HD for the 2004 Athens Olympics and also for Rio 2016.

“It’s primarily because we can’t scoop primetime; the affiliate stations cannot participate in 4K delivery,” says Mazza. “We still consider it a technology demonstration: it isn’t up to the level of production our viewers are used to and the distribution methods have to catch up.”

With less than 24 hours until the action begins in earnest, it’s now time to recheck the systems, start the countdown, and get ready for the run ahead.

Says Mazza, “Every part of the team — NBC, OBS, and POCOG — has been firing on all cylinders.”