Golf fans unable to attend the AT&T Pebble Beach Pro-Am for Bill Murray’s annual hilarious antics and notorious apparel this week have the chance to see the next best thing from the comfort of their living room: Bill Murray in 4K HDR. Working with CBS Sports, which is producing the HD broadcast and 4K HDR coverage, DirecTV is delivering golf live in 4K HDR to the home for the first time at Pebble Beach from Holes 7, 17, and 18. 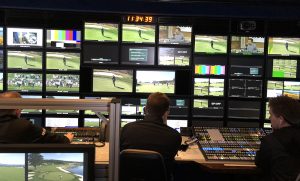 “Pebble Beach is the perfect venue for [4K HDR] because it’s such a beautiful course,” says John Ward, SVP, content operations, AT&T Entertainment Group. “What has really blown me away are the flecks of sand in the sand trap and blades of grass flicking up from the fairway. For the first time, I believe it looks like what your eyes see in everyday life: incredibly lifelike. The level of detail is just phenomenal.”

Although CBS Sports and DirecTV have worked together on several 4K HDR test productions (including the 2017 Pebble Beach Pro-Am) over the past year or so and have teamed up to deliver multiple tournaments in 4K SDR to DirecTV viewers, Pebble Beach marks the first time a live 4K HDR golf telecast will be delivered to DirecTV subscribers (who have a Genie HD DVR, 4K-ready TV, and authorized account). Thanks to the line of 4K shows and 4K HDR tests, CBS and DirecTV are hitting their production grove in Monterrey.

“We are seeing a lot of progress, and we’ve got it to a point now where we’re not sacrificing much of anything because of HDR,” says Mike Francis, director, remote engineering, CBS Sports. “We are basically able to do a show on the level that we are used to [for HD], especially with native HDR replay, which is a very big step forward.”

Inside the 4K HDR Production: Yogi at the Center of 10-Camera Show

CBS has deployed nine unilateral Sony HDC-4300 cameras for the 4K HDR show. An additional HDC-4300 serves as primary camera on the 18th green, delivering both a 1080i SDR and a 4K HDR feed. In addition, an upconverted 1080p feed from the blimp camera will provide added coverage on Saturday and Sunday.

“The camera on 18 is being controlled by the main show[-production team], but we are able to utilize it for the 4K HDR show. It’s a great way to get a little more coverage and also be efficient. Shared services [between the HD and 4K HDR productions] have been something we have really focused on every time we have done these shows.”

Game Creek Video’s Yogi A and B units are onsite, serving the 4K HDR production at No. 7, 17, and 18. The dedicated 4K HDR production team is inside A, and B is being used primarily as an office and 4K HDR viewing area. In addition, the audio room in B has been transformed into an announce booth for the 4K HDR show. 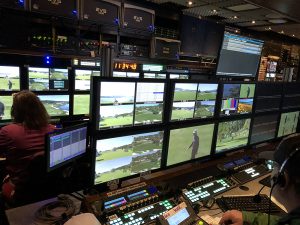 “Luckily, since Yogi is such a new truck, it had most of the correct equipment [for 4K HDR],” says Francis. “We licensed some conversion [equipment] to handle the HDR and got some HDR licensing in the video-shading area. Normally, we would have to have lots of [HDR] monitors, but it was just licensing on this [production].”

The replay portion of the 4K HDR production ecosystem has come a long way over the past year: all replays this week will be native 4K HDR using Yogi’s EVS XT4K replay servers.

Graphics continue to be upconverted to 4K HD in real time because of current hardware and color-space limitations. In addition, CBS will integrate a 1080i commercial reel into the 4K HDR show for the first time — another significant step in the evolution of live 4K HDR sports coverage.

Over the past year-plus, CBS Sports has settled on hybrid log gamma (HLG] as its HDR format for a variety of reasons, including its backwards-compatibility with SDR monitors. 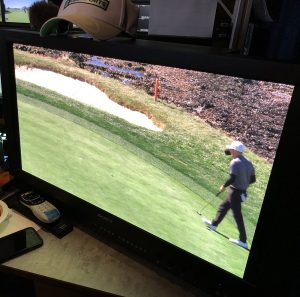 “Our HDR-format [decision] has taken some time, but we’ve settled on HLG, and that is the format that we will continue to move forward on,” says Francis. “Today, It’s the only way to go from the camera to the consumer without changing the tone-mapping. The other advantage is that it’s still credible for SDR monitoring in the mobile units, which is still what 95% of the monitors in trucks today have. As more equipment supports HLG, we will continue to integrate more elements into the show.”

Transmission Scheme: HEVC to Broadcast Center
In terms of transmission, the 4K HDR feed is HEVC-encoded by two ATEME encoders and carried via two redundant AT&T 200-Mbps data circuits from Pebble Beach to the AT&T Broadcast Center (LABC) in Marina Del Rey, CA, where it is then distributed out to homes. 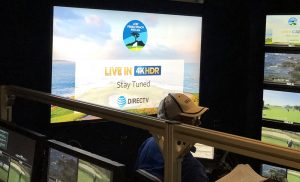 A 4K HDR monitor inside Yogi displays the downlinked feed to monitor the quality of the feed for viewers at home.

In an effort to QC the experience that viewers have at home, AT&T is displaying the downlinked feed on a 4K HDR monitor inside Yogi at Pebble Beach.

“I’m really impressed with how the image looks on the downlinked feed to the home customer,” says Ward. “That is obviously what we’re most concerned with. I know it looks great in the truck, but how does it look to the viewer at home? Thankfully, those images have been stunning.”

Looking Ahead: Much More 4K HDR To Come for AT&T/DirecTV
Since delivering the first 4K HDR telecast to U.S. homes on Dec. 14 with a Penguins-Golden Knights NHL Matchup, AT&T/DirecTV has continued to blaze the live 4K HDR trail. It has committed to delivering 13 NBA games live in 4K HDR this season (beginning with Cavaliers-Bucks on Dec. 19) and carried Brian Setzer’s Christmas Rocks! concert on Dec. 18, the Rose Parade on New Year’s Day (in conjunction with Scripps), and UFC 220 in Boston on Jan. 20. In addition, beginning today, DirecTV (along with Dish Network and Comcast) is offering 4K HDR coverage of the 2018 PyeongChang Olympics on a one-day delay. And Ward says to expect announcements of live 4K HDR programming surrounding sports events in the coming weeks and months.

“Obviously, we don’t want to go backwards; we want to keep pushing this forward. And that means doing more 4K with HDR,” he says. “We went from 600 hours [of live 4K content] in 2016 to more than 800 hours in 2017, and I’m hoping for 1,000-plus hours this year, and I want the bulk of that to be in HDR because we believe that to be the truly unique visual difference.”

CBS Sports and AT&T’s live 4K HDR presentation of the AT&T Pebble Beach Pro-Am can be seen on DirecTV 4K channel 106 by subscribers who have a Genie HD DVR (model HR54 or later), DirecTV 4K-ready TV (or a 4K TV connected to a 4K Genie Mini), and SELECT Package or higher.