Live From PyeongChang: Enhancements in Store for Viewers Around the Globe

OBS has 4,000 staffers on hand to deliver 20 HD multilateral feeds to rightsholders

A week that began with the largest sports event in the U.S. will end with the beginning of the largest winter sports event in the world: the 2018 Winter Olympics. Held in PyeongChang, South Korea, located about a three-hour drive east of Seoul, the 2018 Games are set to be the biggest Winter Games to date, and more than 20 rightsholders are on hand to deliver the action to viewers across the globe. The following is an overview of the ins and outs of the production of this year’s event. 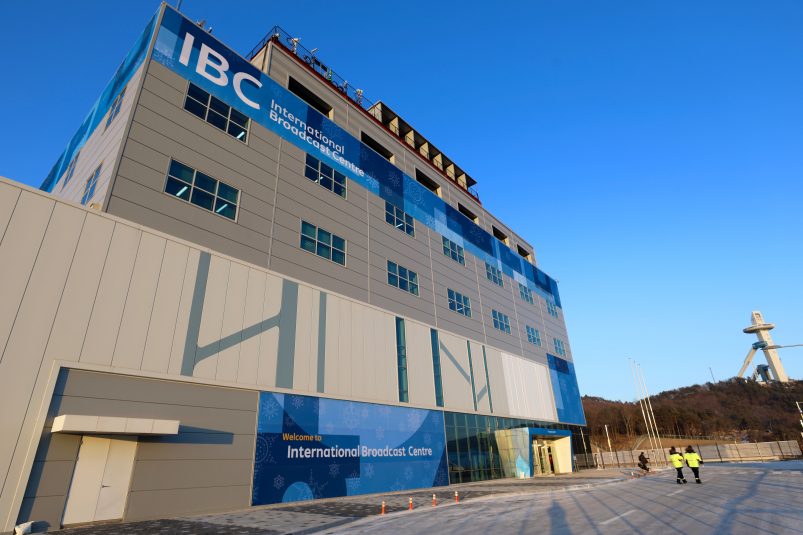 The PyeongChang Olympics IBC is abuzz with activity in advance of the Opening Ceremony.

Let’s start with the basics. Over the two weeks of competition, the world’s attention will focus on seven sports with a total of 15 disciplines (skiing, for example, has six disciplines). The competitions will be held in two clusters: a mountain cluster in PyeongChang with eight venues for the skiing and sliding disciplines and a coastal cluster in Gangneung with five venues for skating, curling, and ice hockey (as well as the Opening and Closing Ceremonies at the PyeongChang Olympic Stadium.

Olympic Broadcasting Services (OBS) will deliver more than 5,000 total hours of coverage, including 850 hours live from PyeongChang. It will take a team of more than 4,000 OBS staffers to create that content and deliver it to rightsholders via 20 HD multilateral feeds (all with discrete surround sound and stereo audio), 7 UHD multilateral feeds, and nine multiclip feeds (MCFs) that feature highlights, press conferences, and more.

In addition, more than 7,000 accredited rightsholder personnel from 67 countries are in PyeongChang. Forty-five of those rightsholder organizations have a presence in the International Broadcast Center (IBC), the largest being NBC and, new this year, Eurosport.

The IBC not only is home to the operations for those rightsholders but also provides a massive technical hub for OBS. More than 900 km of cable ties everything together and allows the optimal exchange of content between OBS and the rightsholders.

Each of the venues has its own host-feed operation (as well as mixed zones, where rightsholders can interview athletes and coaches) to create the core coverage for the events at that venue. Each venue, in turn, is connected to the OBS facilities in the IBC, where the OBS IBC technical team brings in the content and finalizes it for distribution to rightsholders.

The IBC technical areas include a contribution, distribution, unilateral, and transmission center.

The contribution team receives, monitors, and controls all incoming video feeds from the venues (a faulty signal, for example, will be replaced by a backup). The signals are passed to the distribution area, where they are processed and distributed to the rightsholders via HD-SDI signals. International sound is also embedded into the SDI stream along with black burst and color bars. 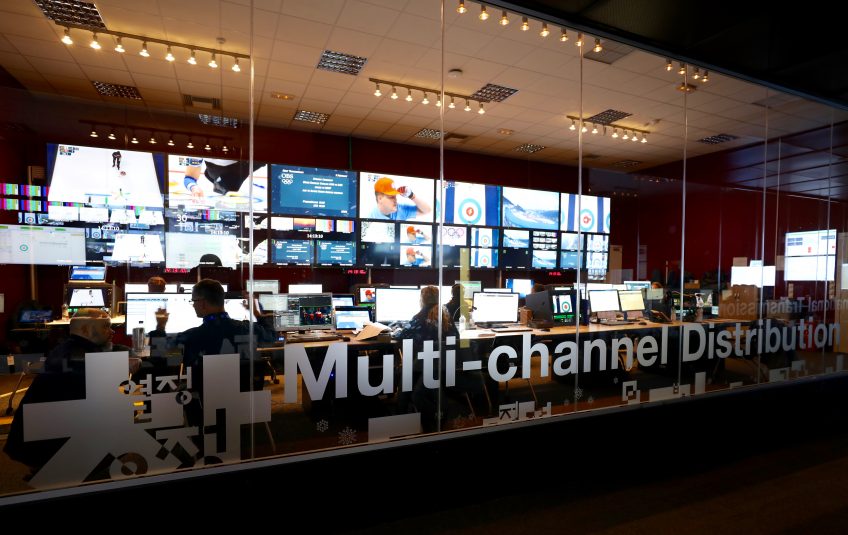 The distribution service area in the IBC plays a key role in the explosion of Olympics-content delivery.

Alongside that workflow is a team in the distribution area monitoring unilateral feeds from rightsholders, including feeds to and from remote studios. In addition, a commentary switching center takes all rightsholder and OBS commentary and coordination circuits and either terminates them there or passes them on to rightsholders.

Production Highlights for the 2018 Games

More than 50 high-speed super-motion (HSSM) cameras (more than 450 cameras in total will be used across the 29 sports). And rightsholders will have access to beauty shots from 12 cameras in PyeongChang, Gangneung, and Seoul, offering panoramic views and more.

In a first for the Winter Games, two-point and four-point cable systems will be used at ice hockey, figure skating, and short-track speed skating. Other specialty cameras include POV cameras at freestyle skiing ski cross and snowboard cross; a ref POV for ice hockey; pop-up cam for sliding sports; a cone cam for speed skating; and various rail cams, including an inverted rail cam at bobsleigh and skeleton.

And, yes, drone cameras will be in use to provide a different look. 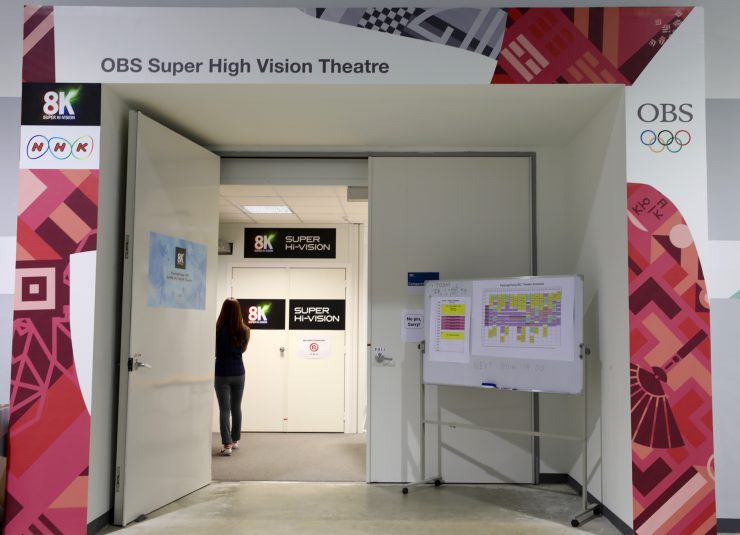 The Super High Vision Theatre has a screen that measures 350 in. diagonally.

4K and both 4K and 8K with HDR will also be made available to rightsholders. For the Opening and Closing Ceremonies and several key sports, NHK’s efforts on 8K HDR coverage will serve as the backbone of a downconverted 4K HDR offering. A theater in the IBC will feature live screenings in HDR and on a 350-in.-diagonal projection screen.

Enhanced graphics will also play a key part in telling the stories of the competitions. Alpine skiing will feature ghost-image comparisons and Stromotion replay analysis, and sliding sports will have Simulcam Replay analysis and sled path for rider comparisons. Cross-country skiing will use GPS for real-time positioning of athletes with distances to go and speed information.

Figure skating and ice hockey, meanwhile, will have a multicam replay to give the viewer a multiview angle in normal speed moving around the skater moving in slow speed.

For freestyle skiing and snowboard sports, enhancements include the use of jump-analysis graphics for cross, slopestyle, halfpipe, and snowboard big air to measure distance, height, hangtime, speed, and rotations.

In addition, MCF service will be expanded to distribution of clips and angles not used in the host-feed coverage. The clips will include HSSM shots, super-slow-motion, and POV-camera shots, enabling rightsholders to better tailor the coverage for their viewers. And, for the first time ever, the MCF will include enhanced graphics and analytical content for use in postcompetition analysis.

Another first will be Content Plus, a Web-based content-delivery platform that will allow rightsholders to access fully produced and short-form content for digital and social-media needs. OBS will also deliver individual digital components to better meet the needs of rightsholders. 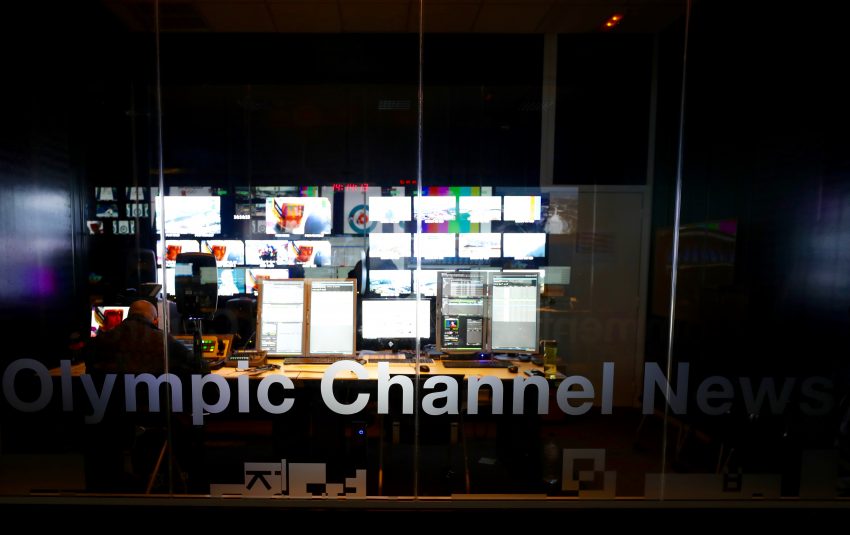 The Olympic News Channel will have expanded offerings. The ONC is an around-the-clock packaged channel offering ready-to-air highlights, interviews, and feature stories. This year, it is also offering B-roll footage and raw mixed-zone interviews via the OBS Media Server or Content Plus. The ONC will also be part of an expanded suite of Multi-Channel Distribution Service channels, with rightsholders having access to eight ready-to-air channels delivered via encrypted satellite distribution.

The competitions are already under way, but tonight’s big event, the Opening Ceremony, is a celebration that kicks off the Games with style and pomp. And with the men’s downhill on tap for Saturday morning, the run of compelling competition gets off to a, literally, quick start.