The 60th running of the Daytona 500 takes place this Sunday, and Fox Sports, as it has done every year, again has found a way to push the technological envelope and expand on the resources dedicated to broadcasting the Great American Race. Coverage of this year’s race includes the introduction of Visor Cam, the return (and refinement) of the dedicated Car Channels on Fox Sports GO, and — in an industry first — a tethered drone that will provide live coverage from behind the backstretch at Daytona International Speedway.

“Every year, there’s something new,” says Mike Davies, SVP, field and technical operations, Fox Sports. “The Daytona 500 is always a great way to kick off the first part of the year in terms of technological testing: a lot of the things that we bring down to Daytona to look at, to test, and to try are things that manifest themselves later and in other sports. It’s a lot of fun to dream these things up.”

A Unique Point of View

This weekend’s race will feature all the camera angles that racing fans have come to expect, plus a few new views that promise to enhance the broadcast. Fans have grown accustomed to seeing their favorite drivers up close thanks to in-car cameras, but, on Sunday, they’ll be able to see what the driver sees. 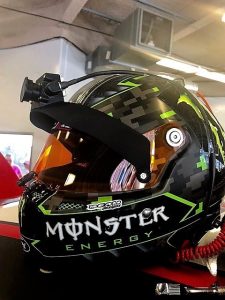 Visor Cam will allow fans to see what the driver sees.

“You can try to put cameras everywhere you can, but seeing what the driver is seeing through a camera placed just above his eye line on his visor is pretty cool,” says Davies. “We’re looking forward to having that at our disposal.”

Fox Sports worked closely with NASCAR and ISC to provide aerial drone coverage of the Daytona 500. The drone, which will be tethered to allow longer periods of flight time, will move around behind the backstretch — outside of the racing area — to cover the race from a new angle.

Gopher Cam, provided by Inertia Unlimited, returns for its 10th year with enhanced lens quality for a wider, clearer field of view. Three cameras will be placed in the track, including one in Turn 4 and another on the backstretch.

Fox Sports will deploy a record number of in-car cameras during the Daytona 500. In total, Sunday’s broadcast will feature 14 in-car cameras, including the pace car — more than in any NASCAR race in the past 15 years. Each car will be outfitted with three cameras for three viewing angles.

Last year, Fox Sports launched two dedicated Car Channels on the Fox Sports GO app, each focusing on a single driver. For this year’s race, Fox Sports has opted for a team approach, showing multiple drivers, cars, and telemetry data on the channel.

In total, Fox Sports will deploy a total of 20 manned cameras, including three Sony HDC-4300’s operating in 6X super-slo-mo, one Sony HDC-4800 operating in 16X HD slo-mo, and an Inertia Unlimited X-Mo capturing 1,000 frames per second. Fox Sports will outfit its Sony cameras with a variety of Canon lenses, ranging from handheld ENG to the DIGISUPER 100. The network will also have four wireless roving pit/garage camera crews, 10 robotic cameras around the track (plus three robotic Hollywood Hotel cameras), and a jib camera with Stype augmented-reality enhancement. The Goodyear Blimp will provide aerial coverage. 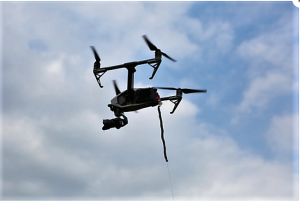 A tethered drone will provide live coverage from behind the backstretch at Daytona International Speedway.

Not to be forgotten, viewers will be treated to all the sounds of the race as well, thanks to more than 100 microphones surrounding the track. Fox Sports plans to make use of in-car radios throughout the broadcast, both in real time (having the drivers and crew chiefs narrate the race) and after the fact (using the audio to tell a story).

A Compound Fit for the Super Bowl of Racing
For the first time in 12 years, Game Creek Video’s FX mobile unit will not handle Fox Sports’ Daytona 500 production. Instead, Game Creek’s Cleatus (known by another network as PeacockOne) will be responsible for the main race broadcast and will be joined in the compound by 11 additional units for digital production, editing, RF cameras and audio (BSI), telemetry and graphics (SMT), and studio production. Two satellite uplink trucks will be onsite, as well as a set of mobile generators that will provide nearly 2 MW of power independent of the local power source.

Fox Sports is shaking up its transmission as well, relying on an AT&T gigabit circuit capable of transmitting eight video signals (and receiving four) via fiber by way of its Charlotte, NC, facility to Fox Sports’ Pico Blvd. Broadcast Center in Los Angeles.

“Based on some of the things that we’re doing for the World Cup in Moscow as well as home-run productions for MLS and college basketball, we’ve taken some of that knowledge and leveraged it to doing full-on contribution for NASCAR,” Davies explains. “It’s exciting, it’s scalable, and we’re looking forward to doing it. AT&T put in circuit at every track or is in the process of doing so, so this is a first foray into IP transmission as it relates to NASCAR.”

The benefit of transitioning to IP transmission, according to Davies, is the volume of content that Fox Sports will be able to send from tracks that notoriously lack connectivity. “At the end of the day,” he says, “we’ll be able to leverage resources from Charlotte and Pico to do more things. Right now, we’re able to contribute more to our Charlotte shows via fiber, but, like everything in technology, the more we get used to it and the more we know how to use it, the more useful it’s going to be.”

Daytona 500 Gets a Graphics Makeover
The on-air graphics package for the Daytona 500 will be new, featuring much of the look and feel of Fox Sports’ football, basketball, and baseball graphics with all the data that NASCAR fans expect.

Fox Sports will up the ante on virtual graphics and augmented reality, deploying Stype camera-tracking technology (with a Vizrt backend) on a jib between Turns 3 and 4 in order to place 3D graphics within the broadcast. For example, the system can be used to create virtual leaderboards, sponsor enhancements, and race summaries that are placed on Turn 3 as virtual billboards.

“Where that jib is between Turns 3 and 4, you can place graphics [on screen in] such a way that you don’t necessarily have to leave the track in order to get information across,” Davies explains. “In the past, we might have used full-screen graphics, but now, we can put the graphics in space, and it looks pretty cool. It’s the third year that we’ve been doing that, and we seem to get better at it each year.”

The network has also enhanced its 3D-cutaway car, putting these graphics in the hands of the broadcast team. And, in the booth, Fox Sports NASCAR analyst Larry McReynolds will have his own dedicated touchscreen, allowing him to enhance any technical story and give the viewer clear illustrative explanations during the race.

A Company-Wide Effort
Between the production personnel, camera operators, engineers, on-air talent, and many more, Fox Sports currently has 300 people onsite at the Daytona International Speedway. In addition, Fox Sports’ Pico and Charlotte facilities, as well as its network-operations center in The Woodlands, TX, are very much a part of the action. And, when the Daytona 500 starts on Sunday, all will be ready to deliver this year’s race to NASCAR fans everywhere.

“Between everything that you’re going to see on-screen and everything under the hood, these are all things that are going to help the company as a whole,” says Davies. “We’ve been able to bring together all of the resources across the company, and it’s particularly exciting to get everybody working as one on this event.”