Serving ESPN’s biggest shows, the truck was built with an eye toward tech to come

Following a busy 2017 that saw three new trucks hit the road, Game Creek Video has kept the momentum going in 2018 with the launch of 79, its most technologically advanced IP truck to date. 79 will serve the biggest shows on ESPN — think College Football Playoff National Championship and the NBA Finals — as well as a host of other marquee events on the sports calendar.

Named for the year in which ESPN was founded, 79 is Game Creek’s third IP truck in less than four years, following Encore in 2015 and Yogi in ’17. With each new build, Game Creek has learned from and improved upon the previous IP infrastructure in order to take advantage of existing IP-based technologies and prepare for what’s to come.

“Encore was built simply for capacity’s sake,” says Jason Taubman, VP, design/new technology, Game Creek Video. “We’re starting to build trucks now for IP’s sake: what that can bring to the table down the road in terms of capacity and native connectivity to other devices. The industry is clearly going that way, and we’re trying to be right out on the bleeding edge of it.” 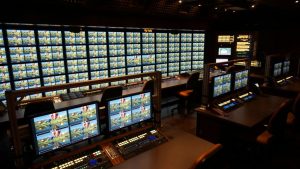 Despite having a two-tier design (Encore has three), 79 features the largest production area ever built on a Game Creek truck.

The 53-ft. expando comprises an A and B unit: the A unit houses the main production area, audio production, and core engineering; B unit, graphics, replay, and editing. One of the most noticeable highlights of 79 is the largest production area ever constructed by Game Creek, with a monitor wall that can display for more than 200 images at once.

“The College Football Playoff National Championship is basically ESPN’s Super Bowl: it’s the largest single production that they do every year,” says Garrett Sullivan, VP, Game Creek Video. “We have over 100 cameras for that game and the director, Derek Mobley, needs to see every one of them. We needed to have a monitor wall that could provide him with that. With shows like that, ESPN comes out with quite a roster of individuals, and they need a space to be part of the production. That’s what this facility will do for the foreseeable future.”

79 is based on an Evertz IP infrastructure, including an Evertz EXE SVDN 888×1164 video router that services both units. Although the driving force behind launching another IP truck was need for capacity — “If you want to do 4K at college-football-championship scale, that forces you into an IP truck,” says Taubman — the Game Creek Video team has been keeping a close eye on the SMPTE 2110 suite of standards. Currently, 79 houses a Grass Valley K-Frame production switcher; however, once Grass Valley’s new X-Frame is available, Game Creek plans to swap out the switcher. 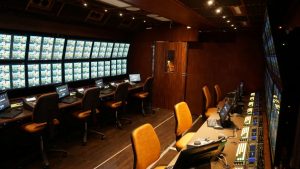 79’s B unit is wired for 180 channels of replay and houses four edit spaces.

“We are fully expecting the X-Frame from Grass Valley to be 2110-capable shortly, and, as soon as that becomes available, we’re going to start converting that infrastructure into a 2110-style infrastructure,” says Taubman. “We’re also expecting the future offerings from EVS and Sony to be native IP, so we’re positioning ourselves to take advantage of all of that as it becomes available.”

Game Creek wired 79 for up to 32 full CCUs in 4K and carries Sony HDC 4300 cameras with Canon lenses onboard. Fifteen 12-channel EVS XT4K replay servers — all 3G- and 4K-capable — add up to 180 total channels of available replay. Image Video is responsible for tally, and Vizrt and ChyronHego graphics systems are also on board. The truck is HDR-ready and able to handle 4K or 1080p HDR at the scale of a World Series or Super Bowl.

“Instead of having one, two, three trucks at one particular location, we can have one system that services all sorts of different needs. 79 is going to do that,” says Sullivan. “We’re seeing a big push for 4K HDR and 1080p HDR. This truck is ready to go on both fronts.”

For audio, Game Creek selected a Calrec Apollo surround-sound console with Hydra2 to link desks, and an Evertz EMR 20096×20096 audio router manages all connectivity (the audio router breaks down to 288×288 analog, 480×480 AES, 2944×2944 MADI, and 16384×16384 embedded). A DirectOut Technologies MADI speaker for audio monitoring and an RTS Omneo IP-based intercom were also installed.

“It basically allows us to deal with audio everywhere, so we have the ability now in the IP infrastructure to embed and de embed audio from any stream, anywhere,” says Taubman. “It just makes it a lot more flexible for us.”

79 officially hit the road during the last weekend in February, covering a Sunday-afternoon Cleveland Cavaliers vs. San Antonio Spurs game for ABC. Its schedule is filling up quickly, with several big shows planned for ESPN and others over the next few months. And Game Creek isn’t done yet. A new edit truck, Edit 4, is due to launch later this month.

“Our clients have, over the past 12-18 months, challenged us to do both high-end events at the highest level and the low-end events at bargain pricing. We need the flexibility to meet both demands,” says Sullivan. “The trucks in the fleet, for the most part, have been able to do that, and this particular project will further strengthen our position on the top-tier events moving forward for several years.”