The sprawling production that was Turner Sports’ NBA All-Star Weekend from Los Angeles last month had what many have come to expect in terms of on-court audio, miking as many as four players from each team during the game itself and four on the court at any time for the All-Star Celebrity Game on Friday and the Rising Stars event on Saturday. But there were some subtle factors that made this intimate audio challenging. 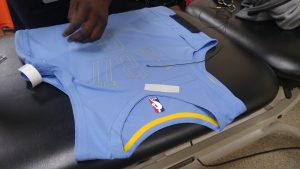 Official NBA jerseys are produced with a pocket to hold the Q5X PlayerMic transmitter.

“Microphones on athletes have become mainstream at this point and pretty much expected when it comes to the NBA,” says Paul Johnson, CEO of Quantum5X (Q5X), the Canadian firm that developed the PlayerMic, which the NBA has been using for broadcasts since 2011. Underscoring that, he points out, is that official NBA jerseys manufactured for the league for the past three seasons have a pocket sewn into them to hold the PlayerMic transmitter. However, he adds, this was the first NBA All-Star Game played since last year’s RF reallocation.

“Spectrum is challenging in Los Angeles under any circumstances and especially now and for a major event like the All-Star Game,” he says, noting that Bexel deployed and managed the wireless microphones on both players and coaches.

The Q5X PlayerMic transmitters operate in the 75-MHz bandwidth between 525 MHz and 600 MHz, just below the spectrum range vacated by the RF reallocation, with as many as 3,000 frequencies available within that space.

Microphones and transmitters — eight per team — were placed into and on a total of 16 jerseys in the team locker rooms before the game by A2 technicians. Players changed jerseys during halftime, with each wired player then having a fresh transmitter. However, Johnson says, not every player fitted with a microphone at the start of the game continued to be wired in the second half. When that’s the case — and it was at the All-Star Game — either an A2 or a trainer can remove the transmitter in the second jersey, and there will simply be fewer wired players on the court because the player agreements that cover on-court audio don’t allow subs to don wired jerseys. The transmitters can be remotely controlled, so the A1 can turn off any transmitter not being used.

“[On-court sound] has become a regular part of the game now,” he says. “In the beginning, it was novel, but I think viewers now would miss it if it weren’t there.”

Turner Sports, which has been innovative with NBA broadcast audio in past years, such as by mixing more venue sound into the television feed and some of the television audio into the venue PA system, has significantly expanded its NBA audio packages this year. In addition to the PlayerMics and Lectrosonics wireless microphones Bexel has supplied the network in past years, the broadcast-gear supplier this season is providing RF systems for sideline reporters and the announcer table, pairing custom ASG Falcon announcer headset boxes with Shure headsets. In addition, Bexel is supplying all the shotgun and boundary-layer effects microphones that Turner Sports deploys courtside, as well as providing RF-coordination services at the arenas.

The overarching difference this season is that Bexel will be the sole strategic vendor for the network, according to Lee Estroff, VP, strategic accounts, Bexel. “Turner used a number of suppliers for different systems and services in the past for NBA coverage,” he notes. “This year, we’re supplying most of that as a single source.”

He adds that this shift was less about cost than about logistics: “They wanted a greater degree of standardization for their audio packages.”