“Counter Talk Live,” an interactive online live show created by Gabriele Corcos, James Beard award-winning host and producer of The Cooking Channel’s “Extra Virgin,” is bringing a new flavor to SXSW. Counter Talk Live is a self-produced weekly live-stream entertainment show featuring taste makers in food, music, and technology. With a mix of special live interviews, VIP access to events, cutting-edge technology demos and an exclusive party from a secret location, viewers will feel like they are part of the action in Austin. 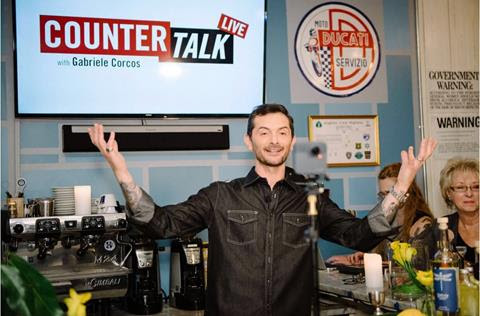 The Counter Talk Live crew is collaborating with live video leaders, Sling and LiveU  to bring this immersive experience to life. The crew is able to drive the high-quality live production to social media using a SlingStudio professional multi-camera production and LiveU Solo. Viewers can tune in to Counter Talk Live’s Facebook and YouTube channels on Tuesday, March 13 and Wednesday, March 14.

“After a decade in the broadcast industry, I find it critical to align myself with technology partners to create the next wave in entertainment. Sling gives me the freedom to self-broadcast high-quality, multi-camera live stream shows on social media. LiveU lets me use the Sling system unchained from the restraints of our Brooklyn hub’s Wi-Fi connection. The combination acts as my personal rocket to total freedom!” says Corcos.

“Gabriele Corcos is no stranger to the broadcast world. He is used to producing high-quality content and his viewers and fans have come to expect that level of production,” says Claudia Barbiero, LiveU vp of Marketing.

“What we are excited to see is how Gabriele and his team will be able to take Counter Talk Live to SXSW and now produce a high-quality, dynamic live show from anywhere, without needing a huge crew or investment.”

Heading up the SXSW Panel on March 14, VR/AR for Cuisine, Content, and Commerce, Corcos will share his VR experiences and explain how it can expand to food and retail markets with special guests Gordon Meyer, VP of Marketing at Lampix and Cathy Hackl, author, producer, and marketing futurist. SlingStudio combined with LiveU Solo, will give online viewers an opportunity to watch the panel live and hear how VR/AR immersive experiences and XReality impact food, business, and content directly from industry experts. After the panel discussion, his fellow panelists will join Corcos on the Counter Talk Live Show to reflect on their discussions and what’s next for VR/AR.

Corcos will host a book signing at the Austin Convention Center from 1-2 p.m. CT, where his crew will live stream the event and what’s SXSW without a little fun? The Counter Talk Live SXSW Party, presented by LiveU and Sling, will feature interviews with guests, a behind-the-scenes look at Gabriele’s live streaming toolkit, and performances by popular Austin-based alternative rock band, Chill Russell  and Brooklyn-based rock band, The National Reserve. Online viewers will get to enjoy the party from the comfort of their own homes and interact with the host and guests.